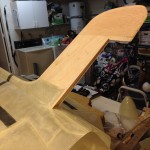 Final test fit of the dorsal before fibreglass

With the final shape of the dorsal completed for our RC Jet, it is on to cutting out and shaping the rudder. On the full size Skyray, the rudder was split into an upper and lower half.  The upper portion acted as a yaw damper primarily while also acting in unison with the rudder.  The lower half acted as the primary rudder surface.  Interestingly, in looking at videos of the Skyray in flight, the yaw damper doesn’t seem to act much in unison with the rudder at all.  Also, in talking with Mark Frankel, the rudder is quite effective on the model causing it to roll pretty substantially.  So, based on those two things, my intention on this model is to make the yaw damper fixed and use the lower half as the rudder.  We will be cutting out both the damper and rudder and splitting them, but when final installed into place, the yaw damper will be fixed.  This way, it will still appear to be a moveable surface. 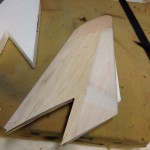 Checking my 3-view to the plans, I traced the rudder shape and transferred it to the dorsal.  The key here when plotting it out is the allowances for the balsa rudder cap (in this case it’s about ½” of material) as well as the spar in the dorsal itself.  In other words, ½” of the rudder leading edge will be removed and thrown away and replaced with a solid balsa cap that gets sanded to shape.  Also, I had to take time to ensure I accounted and had a plan for the location of the spar so I had the proper scuffer setup on the dorsal as well once everything is hinged.  The idea is to have a nice scale looking flange on the dorsal and rounded leading edge on the rudder.  The Skyray has an offset hinge setup on the rudder, so this was kept in mind throughout.  Once sure that everything was right (measure twice, cut once!), I moved on to cutting the rudder out.

I used tracing paper to trace the outline and cut the outline out of the tracing paper using a straight edge and an X-acto knife.  From there and then used 3M 77 spray glue to tack it down onto the dorsal surface.  Again using an X-acto (use a fresh sharp blade) and a straight edge, I cut the rudder surface away from the dorsal using the traced outline as the template.  It was done by cutting the rudder outline halfway through on one side of the dorsal, transferring the template to the other side and then doing the same thing.  To cut through the 1/64” ply TE stiffened, a fresh razor saw works well. 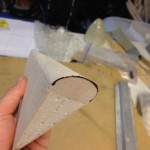 With the rudder now removed from the dorsal, it’s a matter of getting the spar cap on the rudder and the spar into the dorsal.  In the case of this design, it’s a balsa cap on the rudder with a 1/8″ spar installed into the dorsal.  First, the balsa rudder leading edge spar cap was glued using titebond.  With the rudder LE on and the glued cured, it was sanded to shape. Given the offset hinge design of the real deal (the purpose of this on the full size is to help reduce surface hinge loads), the rudder has a nice rounded LE.  This was accomplished by using a circle template to trace the shape on each end of the rudder and the LE the rounded according to those markings. 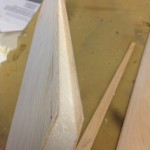 Foam cleared for the spar with allowance for the rudder scuffer

For the rudder spar, I had to remove foam from the inside of the dorsal to allow for the 1/8” spar as well as the balsa rudder LE.  In this case, we are going to use the balsa sheeting as the rudder scuffer, so only the internal foam is removed.  In other cases/designs, we might cut out a section of the dorsal to allow for a balsa spar and create the scuffer differently using 1/64″ ply strips (that will come with the wing).  Double checking the fit and depth of the spar with the rudder, the spar was epoxied in place.  Some micro balloons were added to the mixture to give a little better thixotrpic properties while 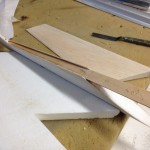 also lightening the epoxy.  Lastly, based on the design, the spar extends well below the dorsal as an attachment to the fibreglass stub fin.  So, some sheeting was added so that it matched up to the fuselage.  Some balsa filler was used to get a rough matching contour to the fuselage stub fin.  Once glassed an glued to the fuselage, that intersection will be cleaned up smoothed out completely.  Lastly, I beveled the inside edges of the rudder scuffer so that when glassed, the scuffer will have a nice sharp edge to it and not interfere with the rudder.

Next time we’ll discuss glassing these parts a bit and hinging the rudder or our F4D Skyray RC jet.  Here’s a sneak peek to give an idea where we’re headed… 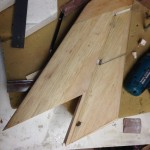