The Tale of Two Exhausts…

A while back, my Friend Brian had a minor incident with his 1/4 scale TBM P-40.  Though, it didn’t result in any physical damage to the airplane, it did result in an impact to the “stand way off scale” exhausts on one side.  Being made of thin plastic, they ended up crushed and unsalvageable.  We originally thought we’d make a quick plug and do some resin castings, but as we looked at the exhausts more, we realized just how out of scale they really were and how much they just didn’t look right at all.  So, enter the 3D printer!  Within a few days, we were able to draw and print some replacements that came out awesome!  Before we begin, if you’ve not read my Q&A on 3D printing, you can read that here to get a better understanding of the process and materials.  Also, if you’d like to see video of this P-40 in action I’ve embedded the video from my YouTube channel at the bottom of this article.  Don’t forget, if you are looking for help with some 3D printing, I can help!  Just shoot me an email through my contact form.

First things first, we had to make a CAD model of the exhausts.  In looking at the original plastic exhausts, they were completely out of scale.  We used the basic dimensions as a starting point, but then used pictures of the full size airplane to draw from.  In my research, the P-40 interestingly had different exhaust shapes depending on the variant and model.
Ultimately, we went with the style that had the most flair to it since it looked the best.  Whether this is accurate to the full size airplane or not for this particular model, I couldn’t say, but we new they’d look good in there either way.

Rhino was used to create the CAD model which took about an hr or so to draw initially.  However, as I researched, I noticed the exhausts had a pretty definitive crescent shape to the exhaust that needed work.  So, overall, I would say it took about 2-3 hours to finalize the CAD model for printing.  The base of the model was made by drawing the desired outline and then extruding it to add thickness to it.  The exhausts were done by lofting the base and exhaust cross-sections along the desired curve of the exhaust.  From there, it was a matter of copying the exhaust at equal spacing until 6 total existed in the model. 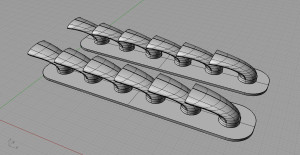 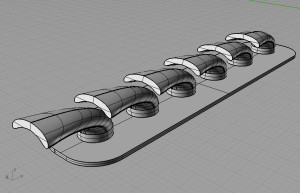 In order to print the CAD model, it first must be exported from the CAD software as a .stl file.  This is a stereolithography file type that when exported to, converts the CAD model into a series of polygons (high resolution = high polygon count).  This is then brought into a slicing software where it is prepared for the 3D printer.  The software generates the necessary G-code to operate the printer.  Also taken into consideration is that since we are using an FDM machine, scaffolding and support material are required for any areas of the part that would otherwise print in mid-air.  This too is done within the slicing software. 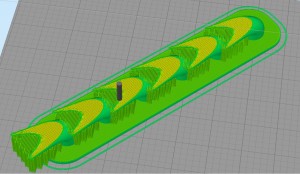 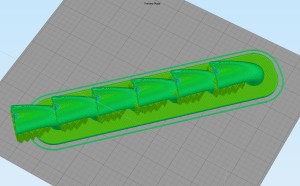 The following pics show the printed part.  All scaffolding/support material was removed resulting in a nice 3D printed part.  Given we are using an FDM machine, there are some striations in the part that do occur, however, this is easily taken care of in the finishing process (next section).  The complete print time took approximately 6 hrs for each exhaust part.  The size of the printed part is approximately 9.5″ long, 2″ wide, and 1″ tall.  It was printed at a 0.15 mm resolution using Polylactic Acid (PLA) as the material.  This results in a hard part that is also, as an added bonus for you green folks, biodegradable. 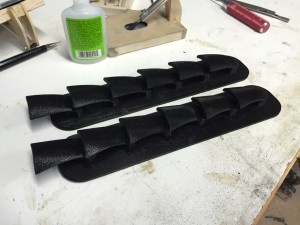 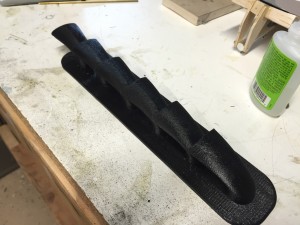 There are a few different ways to finish an FDM printed part which include lightly melting the surface with a solvent to coating it with a self-leveling epoxy.  In our case, we opted for a simpler approach.  To prepare our 3D printed parts for painting, we simply applied multiple coats of Rust-Oleum high build filler primer.  In other words, a coat of primer was applied, it was lightly sanded down and then the process was repeated until the desired surfaces were smooth.  The focus was on the exposed areas that would be easily seen.  We weren’t too concerned about the underside of the exhausts since those would end up against the fuselage and would not be able to be seen.  Using the high build primer only about 3 coats were required to smooth out the surface and prepare it for paint. 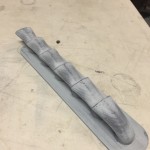 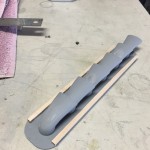 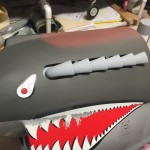 Test fit of the primered exhausts

With the exhausts smoothed out to our liking, it was then painted using ALCLAD II (good stuff!) as the base with some black shading added around the edges.  ALCLAD II is a metallic paint that comes in various shades of metals.  It is the best and most convincing paint that I have come across when it comes to painted metallic finishes.  The key is to have a nicely prepared and smoothed out under surface as that’s what makes the paint truly pop.  So, with the exhausts done and painted, it’s simply a matter of dropping them into the cowl!

To fit the exhausts, scale openings were cut into the cowl using a razor saw and Dremel tool for the exhausts to be placed through.  Standoffs were glued onto the base of the exhausts so as to attain the correct spacing within the cowl.  From there, they were glued in place with some 5 minute epoxy and a piece of aluminum tape was place on the back for insurance. 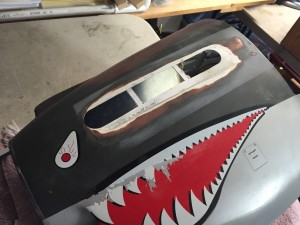 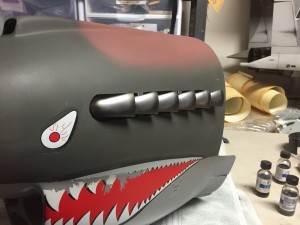 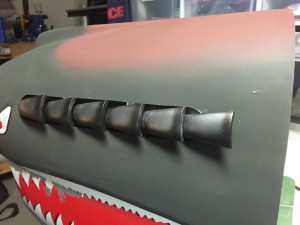 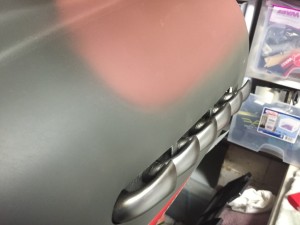 Below you can see the final result as it was well worth the little bit of effort.  It didn’t take much time and now the exhausts are far more representative of the full sized aircraft (the stock ones were pretty bad…).  Little things like this add a considerable amount of realism to ARF’s and kits and it’s fun to do and experiment in different ways.  With 3D printing, making parts like this has gotten a lot easier and quicker. 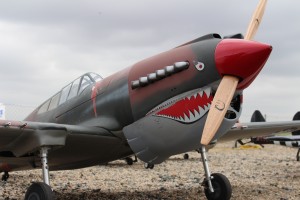 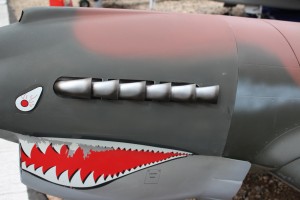 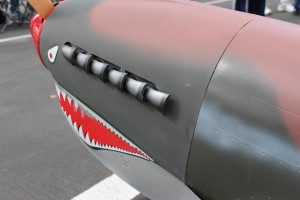 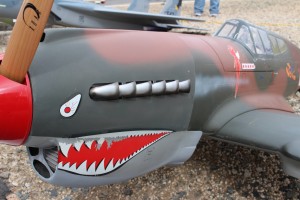 Lest we forget, here is our subject P-40 in action!