THE AIRHOGS MILLENNIUM FALCON BATTERY DIED, SO I MADE IT BETTER!

If your AirHogs Millennium Falcon Quadcopter battery died like mine, here’s a simple way of replacing the battery while at the same time reducing your charge times AND doubling the flight time!

I’ve been enjoying the AirHogs Millennium Falcon Quadcopter quite a bit since my review of it a couple months ago.  I’ve actually taken it with me to a few RC events for fun and it’s been quite a hit.  Who doesn’t love the fastest hunk of junk in the galaxy!?  However, after a flight a few weeks ago, the battery just completely died.  I mean, died!  No power to the quad and no voltage from the battery at all!  So, I had a dilemma, do I dare cut into this machine?  I’d had it a while, so I’m sure it was past warranty and without a working battery, all I had was simply a foam desk model.  So I figured at the very least it was worth a shot!

I promptly purchased three 1 cell 750 mah lipo batteries ($3 at Hobby King), pulled out the Xacto and soldering iron, did a little surgery and we were back in business!  To top it all off, the quad now has a hatch where I’m now able to swap out batteries which means less down time between flights (more fun!) AND the flight times have more than doubled since I’m using a larger capacity battery.  So, here’s a quick article and video showing what I did to make this modification work.  Note that this really only works if you have a lithium polymer battery charger which is a standard item for any electric RC Flyer.  However, if you don’t have one I do provide some discussion and links further down to some inexpensive AC/DC lipo chargers should you want to take the plunge.

To make this work, there just are a couple tools needed.  In addition to purchasing a few 1 cell 750 mah lipo batteries of course, you need an Xacto knife with a fresh sharp blade, a small soldering iron (don’t need a real high power one since we’re using micro connectors), some electrical solder and some small battery connectors.  I used micro deans connectors which are small and compact.  The reason for the connector is so that the battery is removable (via a hatch which we’ll create) and can be quickly charged outside the Millennium Falcon quadcopter.  Conceivably you could hardwire the battery and continue to charge it through the supplied charge lead in the transmitter, but that completely defeats the purpose.  Based on the increased battery capacity, it would take even longer to charge than it does with the stock battery.  If we’re going to cut into this, we might as well improve it in the process! 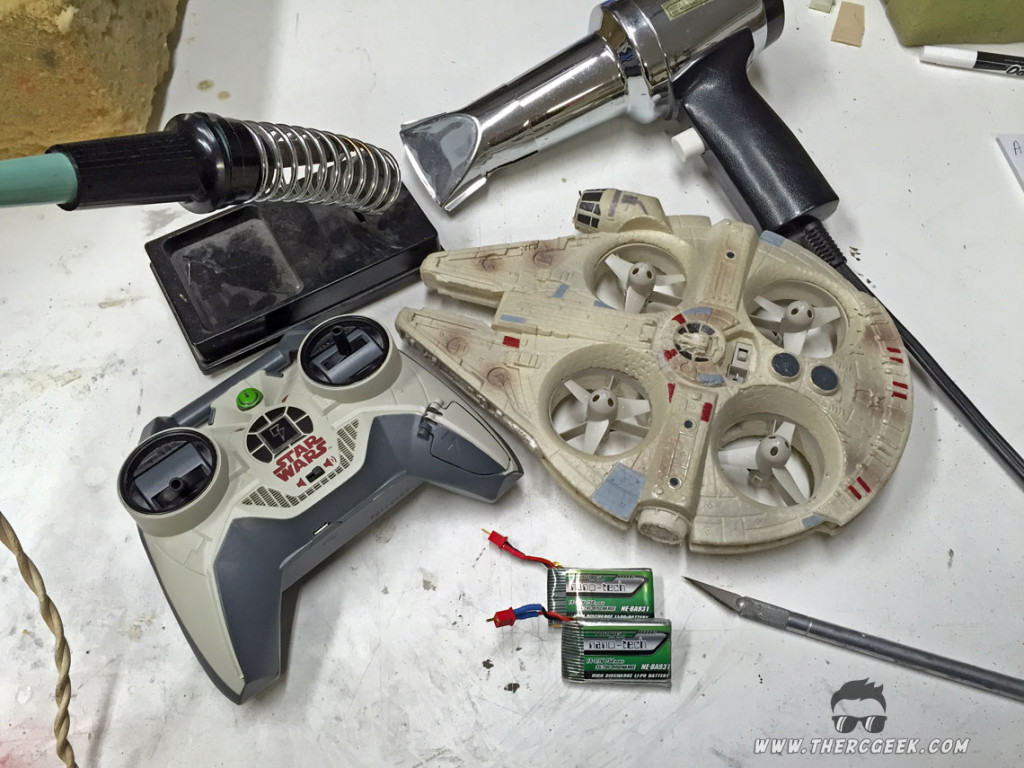 First of all, we need to access the existing battery to remove it.  The battery rests internally on the underside of the quad and is removed quite a bit easier than I expected.  Using the square plastic quadcopter frame as a guide (the frame that positions each of the four rotors), I cut through the foam on the underside using the Xacto knife.  We’re only cutting the underside, so it’s only necessary to cut half way through.  Also, the cut should be made somewhat gingerly so as not to damage any wires routing to the rotors internally.  It’s ok if it takes multiple passes to make the cuts.  With the cuts made around the perimeter, then it’s simply a matter of lifting that center section away to expose the battery and electronics board.  It will require a little force pulling the cut section free as you’ll have to break free some of the foam sections we were unable to cut from the outside.  But use care as you do.  Also, the battery is lightly tacked to the foam and so will likely lift out with the foam center section when you remove it.  This in turn will likely dislodge the control board which is not a big deal.  Once all the soldering has been done and the battery fitted then you can simply push the electronics board back into place and put a little hot glue near the base of the switch (internally) to secure it.

With the underside center removed, it’s at this point that we cut the battery free.  When doing so, cut the leads close to the battery and cut them one at a time.  Cutting both simultaneously may cause the battery to short out and may spark as a result. 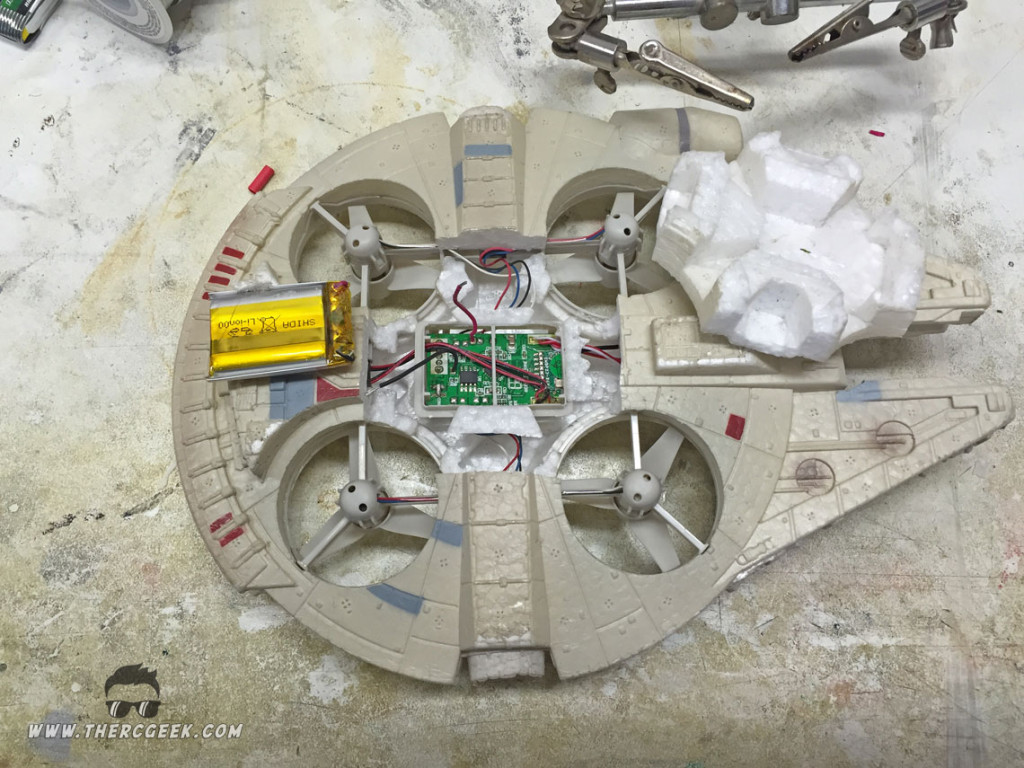 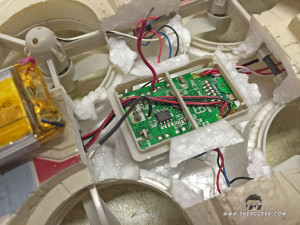 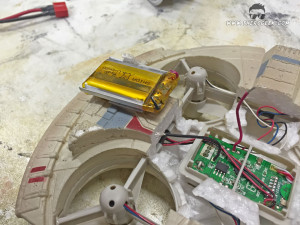 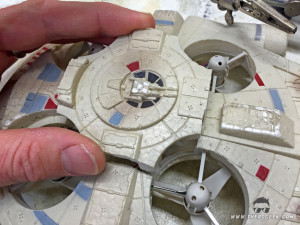 With the old battery removed and cut free, it’s simply a matter of soldering our micro deans connectors onto the battery leads coming from the Millennium Falcon electronics board and on the new batteries themselves.  Note that the most difficult part in this is ensuring that the positive and negative leads align properly for both sides…don’t ask me why I say this, haha!

First, we remove about 3/16″ of the wire sheathing from each of the loose wire ends coming from the electronics board.  This can be done with some wire strippers, or by carefully cutting through the sheathing with an Xacto knife being careful NOT to cut through the wires.  From there we simply solder each of the loose ends onto the appropriate ends of the connectors.  It helps to pre-tin the exposed wire with solder first before soldering the wire onto the connector.  The micro deans connectors are extremely small and can overheat very quickly when soldering, so once the solder starts to flow, 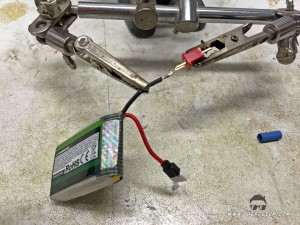 remove the iron.  There’s no need to allow the soldering iron to dwell on the surface.  Otherwise, you risk melting the plastic and ruining the connector altogether.  Lastly, we cover up the solder connection with some heat shrink (don’t forget to put the heat shrink over the wire first before soldering!) and you can shrink that up with a heat gun and/or the soldering iron itself.

The battery leads are soldered in the same way.  My recommendation is to cut and solder one lead at a time to avoid the possibility of shorting the battery.  I enjoy a good fireworks display, but not from my batteries!  Now, with everything soldered, we now have a removable connection between with our new batteries and the Millennium Falcon electronics board. 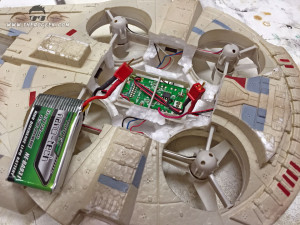 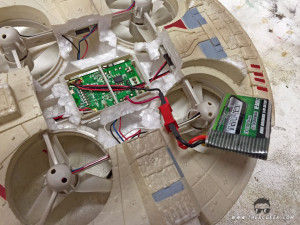 To close it all up now while keeping access to the battery area, we can setup the removed center section as a hatch.  First off, some material needs to be removed to allow for the battery to sit in place and to also allow for running the battery wires.  This can be done with an Xacto knife for any vertical cuts and a screwdriver to clear away excess foam material. Make sure you can get a nice clean fit of the center section with the battery in place before moving on.

From there, I used 3/32″ balsawood glued in place on the sides of the quad and on the removed center section with some hot glue as a base to apply some 1/8″ diameter magnets.  I recommend gluing the wood into the main quad area first and then gluing the magnets down.  From there, glue the wood into the sides of the removable center section hatch.  To align the magnets, place them  (no glue) onto the magnets that have been glued onto the wood in the main quad.  Then, put a decent blob of hot glue onto the wood that’s been glued onto the hatch and push the center section hatch into place.  Let the hot glue harden and dry (wait 10 or so minutes).  Once dry, remove the hatch and the two second magnets should then pull up with the hatch and be glued to it.  If not, apply some more hot glue and try again until the magnets stick to the hatch.  Now, you’ve got a perfect fitting hatch held in place with magnets! 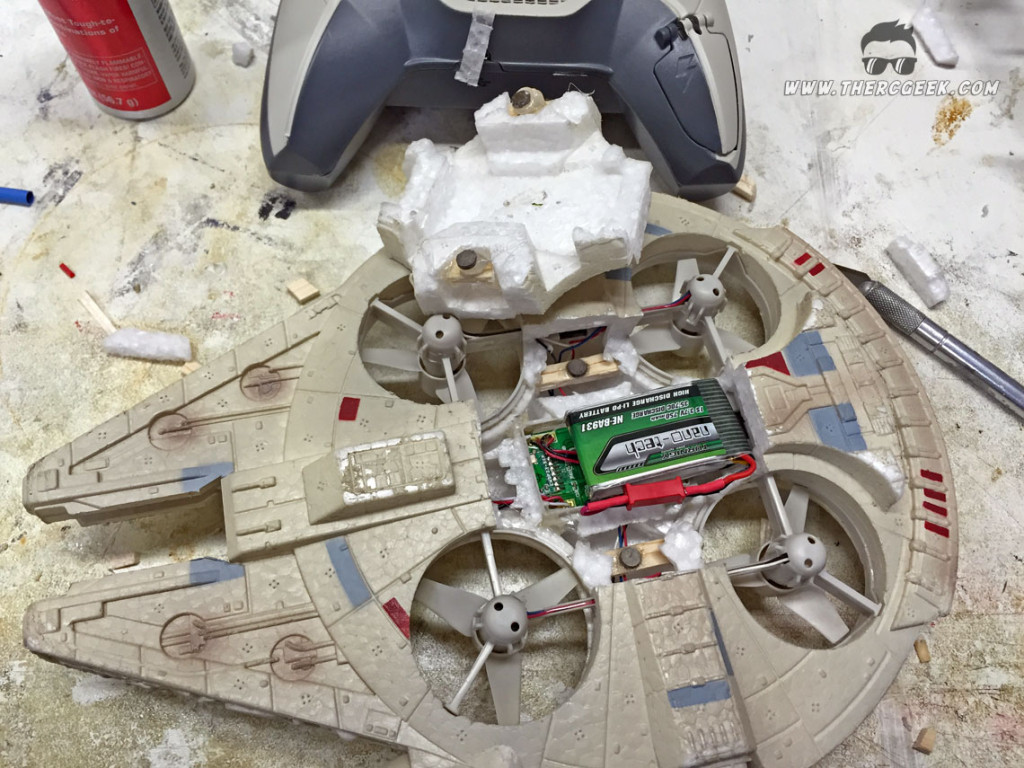 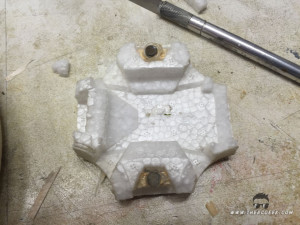 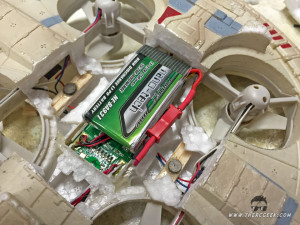 As best I can tell, the battery in the AirHogs Millennium Falcon is approximately 400 mah which is based on some charging tests I did a while back.  So, going from 400 mah to 750 mah results in a significant increase in flight time!  With these batteries I flew for a solid 11.5 minutes between me and my son without any kind of drop in power.  Also, charging outside of the quad now can allow for battery charging that takes 30-45 minutes at the most.  So, with multiple batteries, you can pretty much continuously fly the quad all day long.  However, the only way this is viable is by using a lithium polymer specific battery charger to charge these batteries.  Note that using the stock charging setup can be used but the charge time will be upwards of 2 hours or more.

In terms of chargers, obviously if you already have a charger, there’s nothing you need to do here other than making the necessary charge leads needed for charging the batteries (if you don’t already have one).  However, if you don’t have a charger and aren’t as heavily into RC as some of us but still want to be able to do this modification to the Millennium Falcon quadcopter, you can find a relatively inexpensive AC/DC charger off of Amazon.  You don’t have to spend a lot of money here if you’re only looking to charge batteries for this quad only, but I do recommend one that is at a minimum AC compatible.  This way, you won’t need a 12v battery source.  Either way, you need something that will work well which means a minimum of about $30-$60.  I charge large capacity lipos for my large 90mm and 120mm EDF jets and electric warbirds so am using a Powerlabs 2400 watt duo which will charge any battery under the sun at an insane rate.  It is way more charger than is needed for charging these small batteries, but it’s what I’ve got and I love it! 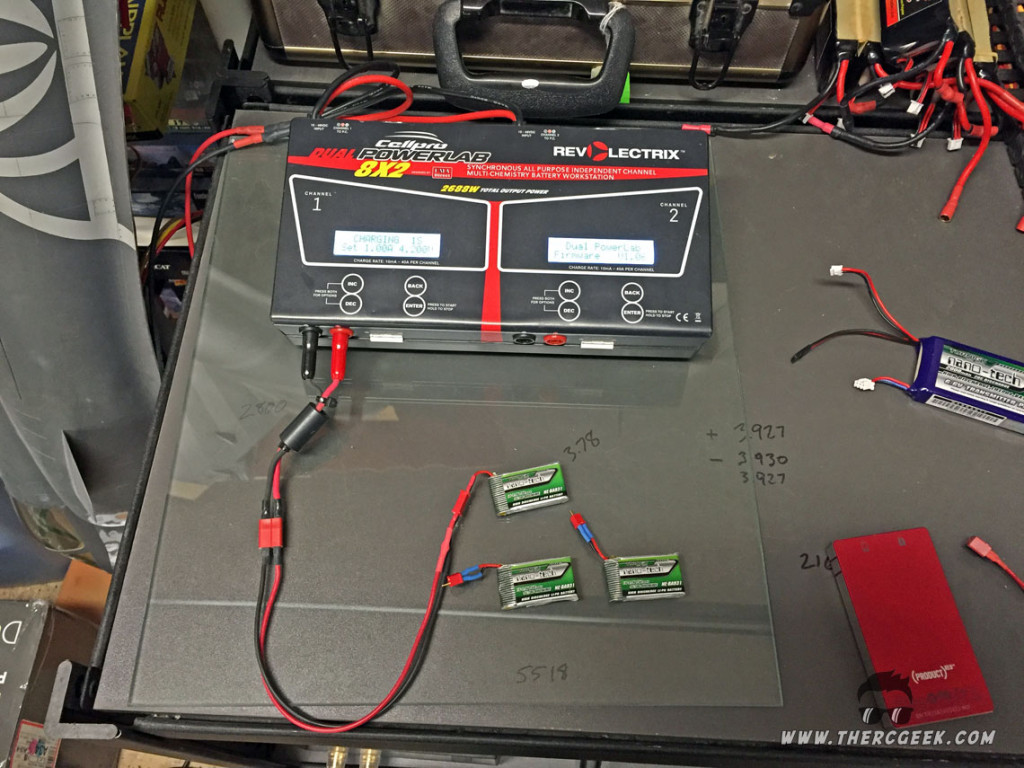 One thing to note about Lipo battery care, in order to get the most from the battery, it’s best to store the battery in a “stored” voltage state which is about 3.8 volts per cell.  Never store the battery fully discharged or fully charged as this over time shortens the lifespan of the battery.  So, at the end of your multiple Kessel Runs for the day, place the batteries on the charger and do a “storage charge/discharge” on them.  This’ll put the voltage right at about 3.8v and help keep your Kessel Runs going strong for hundreds and hundreds of cycles! 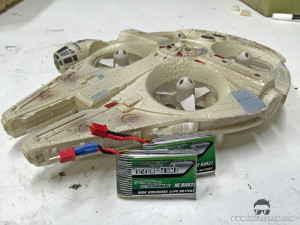 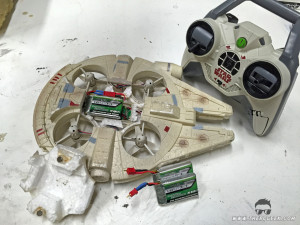 And so there’s my little battery upgrade hack for this little AirHogs Millennium Falcon Quadcopter.  It was pretty frustrating having the battery die like it did, but this fix ended up an overall improvement and it certainly ups the enjoyment factor.  Obviously, if you’re not having any issues with your Millennium Falcon it’s not necessary.  But, if your battery died like mine did and you are willing to do a little surgery, it’s worth it! 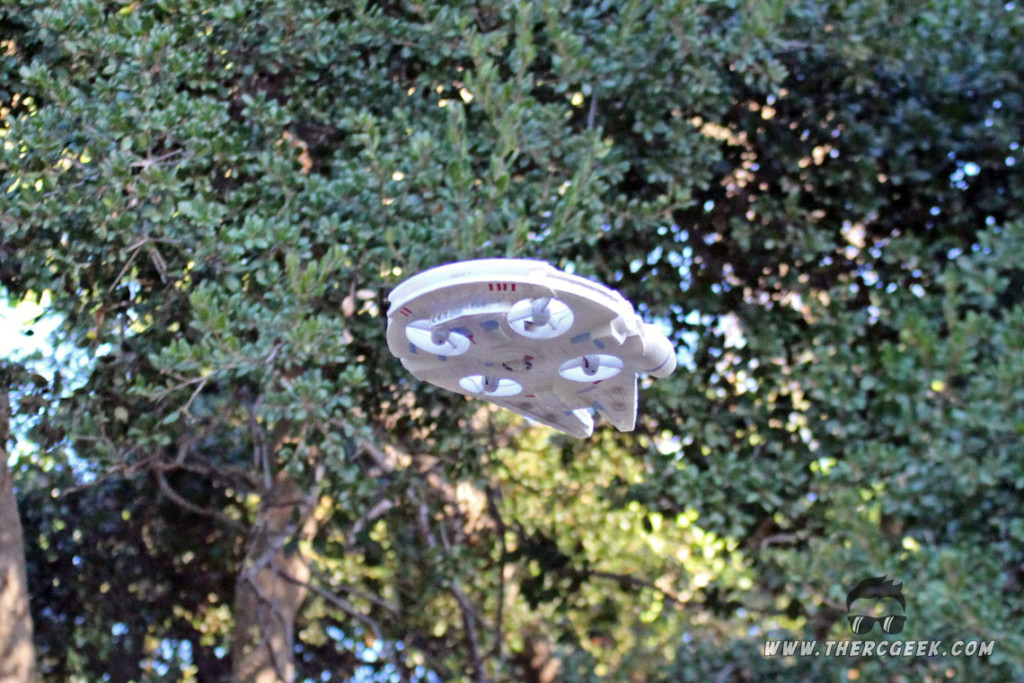