See the full transformation of this Mirage into an Isreali Kfir at: thercgeek.com/kitbashing

It’s no secret, I love deltas!  The Mirage, Kfir and Skyray are some of my favorites if you couldn’t tell from my builds and the aircraft in my hangar.  There’s just something about the look of a delta wing that is so wicked in the air, especially with the addition of canards like the Kfir.  So, when I received a Freewing Mirage 2000 as a gift this last Christmas, I was stoked!  I had been eyeing them for a while, especially after all of the fun I’d been having with the Freewing F-14.  Of course, I can’t leave well enough alone, so we will actually be spending a few articles covering the transformation of this Freewing Mirage 2000 into an IAI Kfir…yes, you read that right! 😉  So, consider this as our first installment of “Foam Kit Bashing 101” as we work toward transforming this Mirage 2000 into the wicked looking Kfir.  However, before tearing into a full kit bash, I wanted to discuss how this airplane assembles and performs stock out of the box.

The nice thing with these Freewing jets is that they are an all inclusive package.  The full power system, retracts, and servos come fully installed and at $299 for the Mirage 2000 it’s a pretty killer deal.  They’re EPO foam which I do have a love/hate relationship with, but none the less you get a pretty cool airplane and they are a great canvas to do fun things with (which we’ll start next in our next installment).  They’re fully finished and assemble really quickly, so what’s not to love when you need a break from some heavy building? 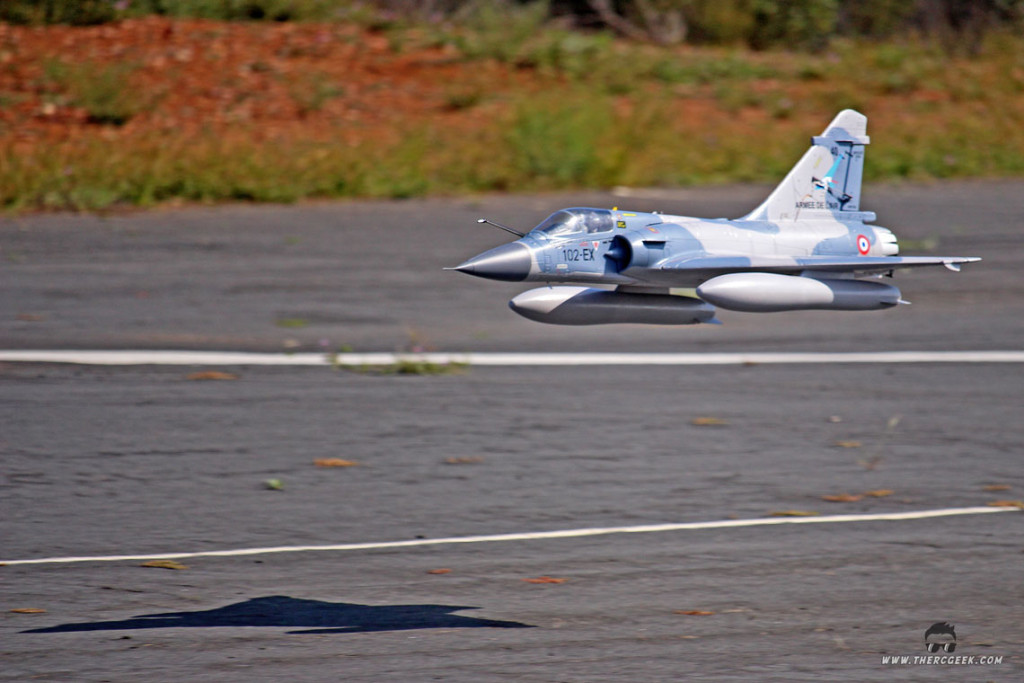 In terms of the assembly of the Freewing Mirage 2000, it’s a pretty simple model to assemble and can be done in about an hour as the parts count is really low.  The aft end of the fuselage requires being glued onto the main fuselage with the wings and dorsal then screwed into place.  The main gear retracts come separately so are required to be installed into the wings prior to placing the wings onto the fuselage.  There are pylons that get glued into the wings and external tanks that are held by magnets which are a nice touch.  In flying my own Mirage IIIRS, I’ve found that the tanks actually help make the airplane a little easier to orient in the air and I can say that flying with the tanks on this Mirage 2000 does the same and actually helps the airplane to lock in a little better in the roll axis. 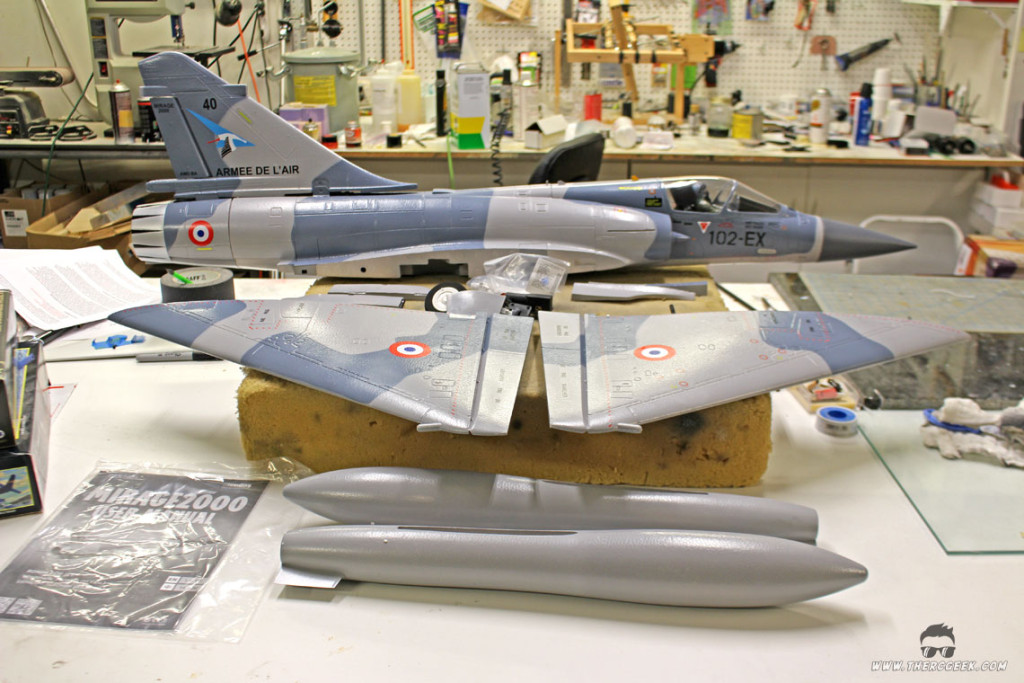 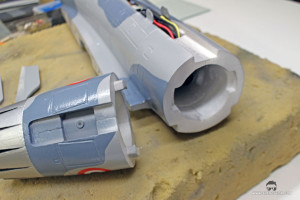 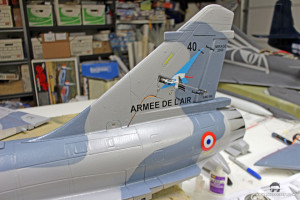 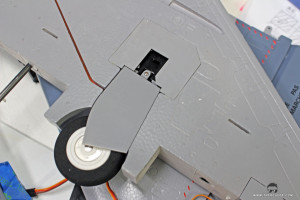 All of the servos are pre-installed with the wires routed into the nose area between the inlets which is where the receiver resides.  Regarding battery install, I shoe-horned (quite literally) a 6s 5800 mah pack in there (more of that install and what I did to make it work is discussed further down in the CG discussion).

During assembly, there were a couple things that I noticed.  First off, the wings took a little strong arming to fully seat onto the fuselage.  This wasn’t really an issue, but is something to note about the assembly.  The rear plastic screw hold-downs simply created a little interference when placing the wings, nothing more.

The other issue I ran across is related to the elevon servos which I ultimately replaced all together with Airtronics 94809 digital servos.  During the assembly I had an issue with one servo seemingly not as strong as the other.  A quick email to MotionRC and they were cool enough to replace it…unfortunately, what they sent (and have listed under replacement parts) wasn’t the same servo that comes in the airframe.  It was nylon geared vs the metal geared which come in the kit.  That being the case I simply put the nylon geared servo in the rudder and placed the stock metal geared rudder servo into the problematic elevon.  This in addition with clearing some material around the hinges seemed to solve the issue.  One thing I noticed however in the setup was that the torque, resolution and response of the servos wasn’t great.  The first 6 flights were flown with the stock servos and I found the aircraft response sufficient, but not very crisp or precise while maneuvering.  That’s when I decided to replace them with the higher resolution Airtronics digital servos.  Doing this gave me a MUCH more responsive airplane allowing me to place it more easily where I wanted it.  When I did this, I actually had to reduce the elevator throw that I had also as the elevator response was notably different.  Roll response was better and more accurate too.  Note that the 94809 is a drop in replacement to the stock servo.  All that is required is to grind away a small tab on the servo mount in the wing that interferes when placing the servo into the tray.  With this removed, the servo drops into place perfectly. 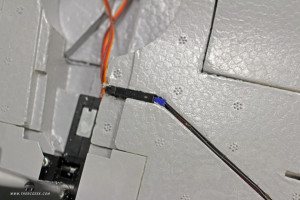 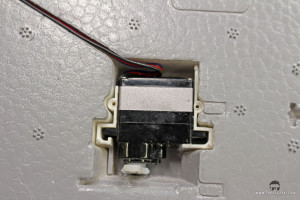 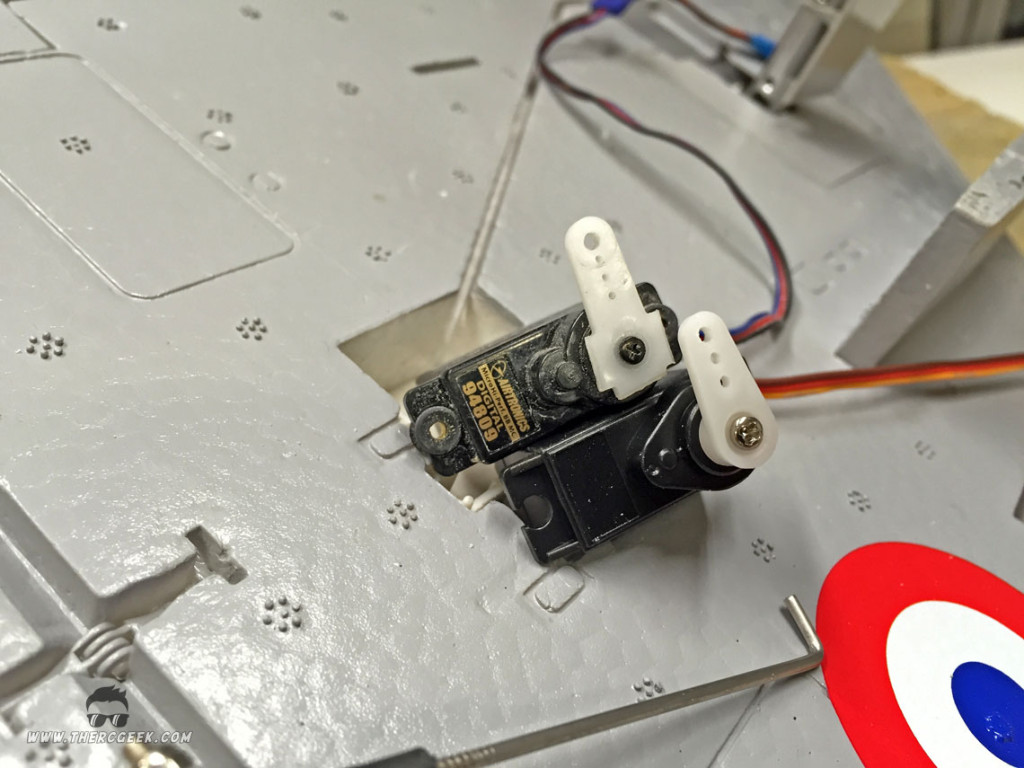 The finish of the Mirage is quite nice.  Though, you’ll never get away from the foam texture without a refinish (which we’ll be doing), it still is decently smooth as a whole.  There are a number of mold release marks on the underside of the wings which is a little distracting up close, but don’t really detract from the looks all that much and you don’t see it from a distance.  The colors and decals are nicely done and seem to be about spot on for this scale geek.  I’ll be honest, I’m not crazy about the trailing link main gear just simply from an aesthetics point of view…it’s just not scale! 😉  Interestingly, I did have one of my gear seriously lock up on me after about 8 flights and lose it’s spring action.  A quick disassembly to clean it up and an application of white lithium grease and it was back in action.  Since then, it’s been working fine without issues. 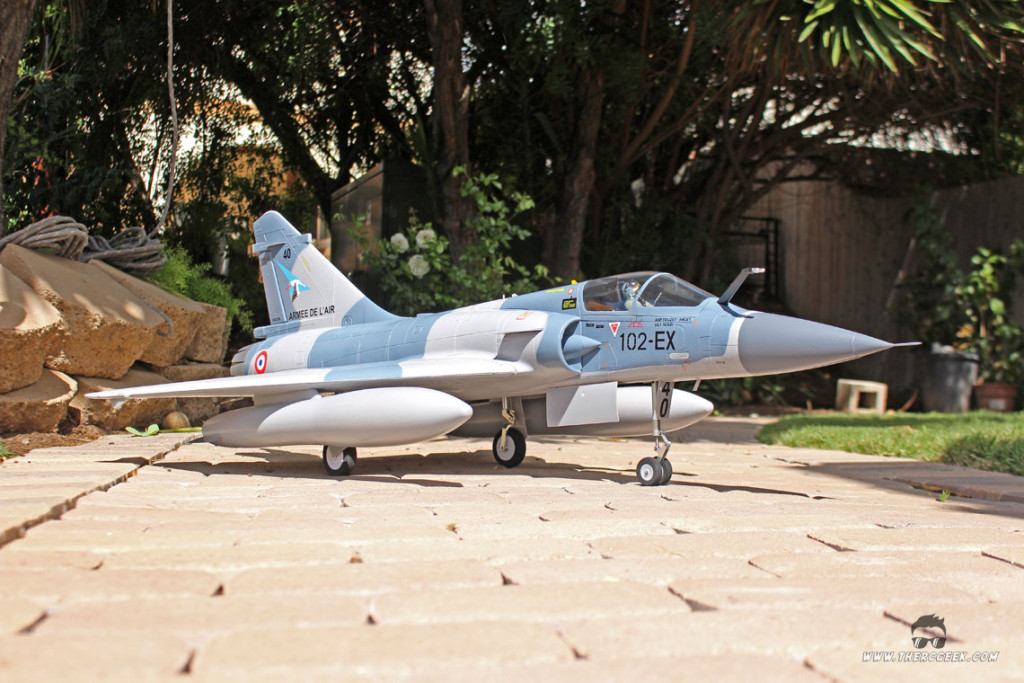 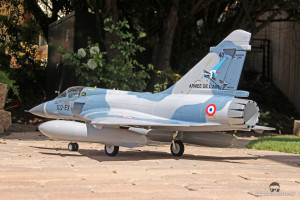 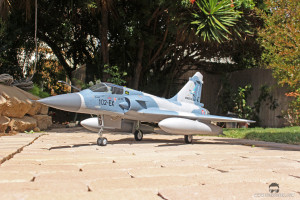 The truth is, there’s really not a lot of room in this mirage for batteries.  The recommendation is  a 6s 4000 mah which fit without issues (but of course I don’t have), but frankly would probably only give about 3 or so minutes of solid flying.  So, since I have a number of 6s 5800 mah packs, I opted to figure out how to make them work.  It is a really tight fit (seriously, it’s tight!), but ultimately I used a dremel to clear away some of the inner walls between the inlets so that the battery could be pushed back to accommodate the CG.  Also, I had to clear some material on the back of the canopy hatch to accommodate the battery thickness and to get the hatch to fit properly.  Ultimately, I ended up at about 1/4″ in front of the CG noted in the manual (~20.5″ as measured from the back of the turkey feathers forward), but that ended up feeling really good in the air and not nose heavy at all. 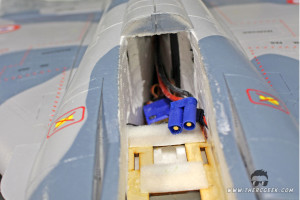 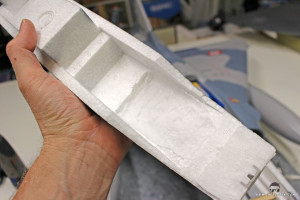 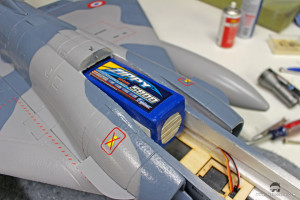 For the control throws, the Mirage uses elevons.  The elevator (pitch) throw listed in the manual I found decent, but I knew right away that the aileron (roll) throw listed was way too much.  Mirages require very little aileron throw to get a decent roll rate.  After a few flights, here’s what I converged on.  I did find that adding just a touch of expo (I’m not an expo guy, so 8-10% was plenty for me) did help with the feel of the model around center. 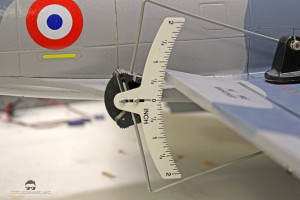 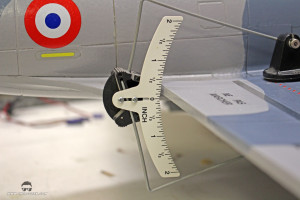 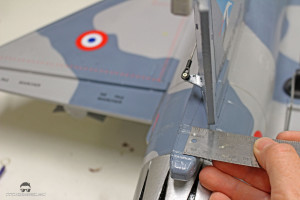 The Freewing Mirage 2000 is an absolute hot rod in the air!  The stock power system pushes this airplane like crazy which makes it a lot of fun.  It is important to calibrate the ESC to ensure full performance, so be sure to check that procedure here.  Between the 80mm F-14 Tomcat and this Mirage, I’m really quite impressed with the Freewing 80mm fan system.  It pushes both of these airframes excellently out of the box.

When properly setup, the Mirage is a blast to fly and replacing the elevon servos really improves the handling qualities.  The airplane looks great in the air and is a real honest flyer.  It’ll handle anything you can throw at it with out any problems and with the thrust from the 80mm fan the airplane is at home going vertical; in fact, I can go straight up from takeoff!  Landings are easy enough holding the aircraft in a positive AoA and using your throttle to control the descent in typical delta fashion.  I was actually surprised at how little power was required to get the right glide slope on the approach. 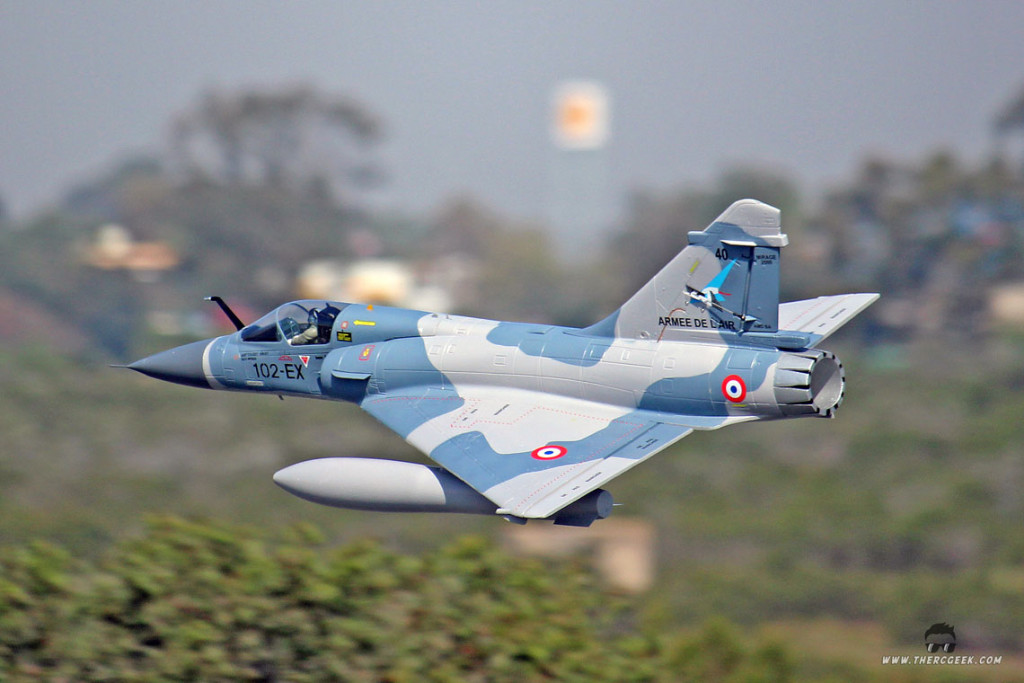 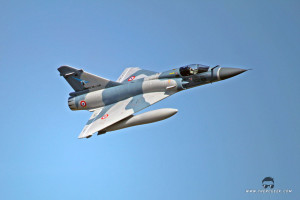 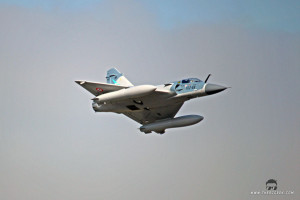 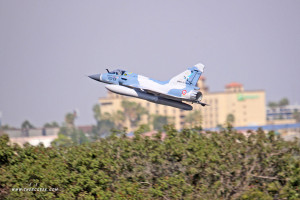 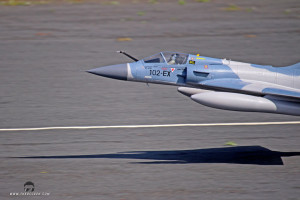 Just as a personal preference, I do wish that the airplane was just a touch bigger.  Mostly, this is for ease of battery installation.  To get any kind of decent flight time from these 80mm birds, really does require larger capacity packs.  One thing to note is that if the ailerons are setup with a lot of throw, the airplane can be very sensitive, so know that up front.  Deltas typically require much more elevator travel than aileron travel.

So, at the end of the day, I’d say the Mirage 2000 is certainly a fun bird.  It’s an easy to transport airplane and with the 5800 mah packs, I can get 4.5 minutes of flying very easily (when I can stay off the throttle for a few passes 😉 ).  The weight of the airplane came out at about 5.5 lb (3.65 lb for the airframe and 1.85 lb for the battery) with those packs and the airframe handles it without any problems.  I do recommend replacing the elevon servos with the Airtronics 94809 servos or something comparable as the stock servos I feel are marginal for the task of flying the airplane.  They do work, but they don’t provide a very responsive airplane.  Also, for me, I prefer flying with the tanks on as it does help with the orientation…and as a buffer for those low passes over the runway!  So from here, our next step will be stripping this baby down and starting our Kfir conversion…time to crank up Rhino and start drawing!

Oh, and on those low passes, make sure to leave some space between the bottom of the airplane and the runway!  I just happened to tie the world’s record for the lowest pass while getting pics and footage for this article.  You see, it’s a record you can only tie…although, I guess it was more of a high speed gear up landing since it skidded to a stop. 😉  It was pretty darn funny I have to say.  I guess it’s a good thing we’re refinishing this bird!  Thankfully, the only damage was a scuffed up underside and some scuffing on the tanks.  I flew the airplane 3 more times that day! 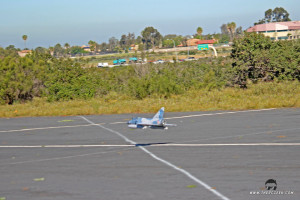 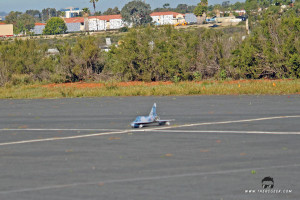 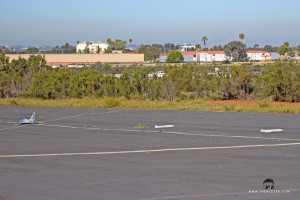 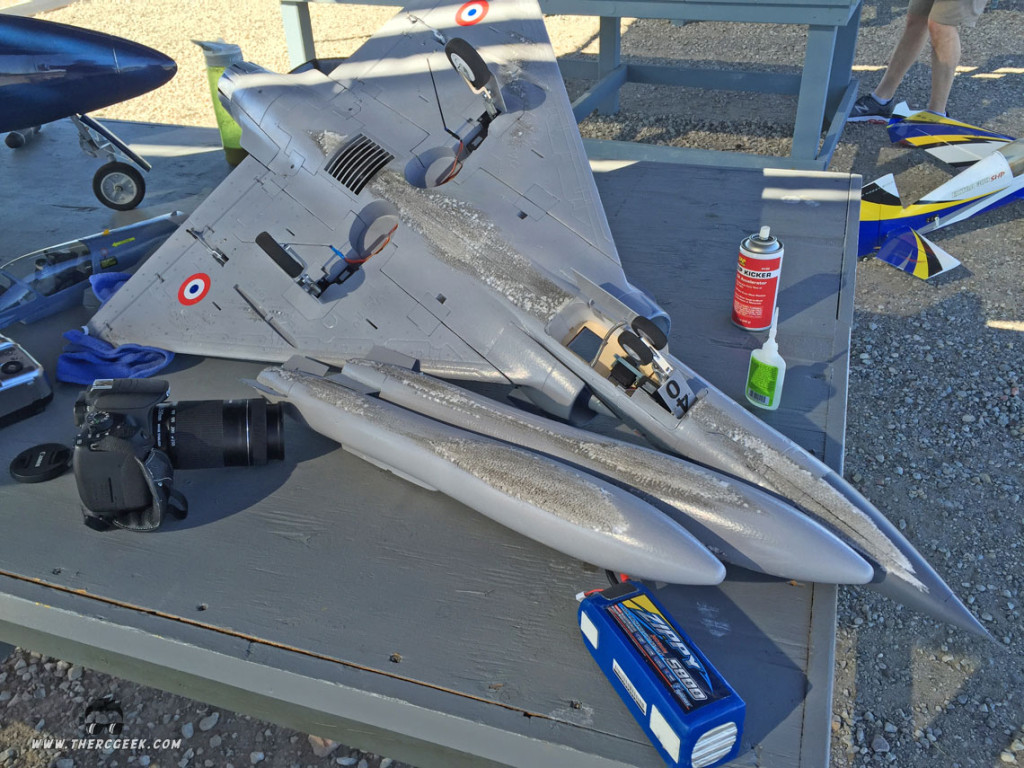