Grumman Iron Works For The WIN!

The Grumman Aircraft Corporation has produced some of the most iconic aircraft of our time (McDonnel-Douglas is another one that comes to mind).  When you think of the numerous aircraft tied to the Grumman name, what really comes to mind are the family of incredible cats they produced starting from the Wildcat all the way through to the Tomcat!  (seriously, these are the kind of cat videos you should be searching for on the internet! ;))  The F8F Bearcat is a proud member of the Grumman cat family and is no exception to greatness.  Designed for pure performance (i.e. climb rate), the airplane is literally the smallest and lightest airframe you could wrap around the largest available engine.  I bet the propulsion group within the company must have been ecstatic!  Consider that it used the same engine as the Hellcat, but with an airframe that was 2000+ lb lighter.

As an aircraft, the Bearcat was a high performance machine having better performance even than some of the early jets.  Though it didn’t quite make it to see combat in World War II, it still remained in service into the early 1960’s with over 1200 total aircraft built.  Now, what you may not know is, that the Bearcat is in fact a real animal…check it out!  Ferocious, isn’t it? 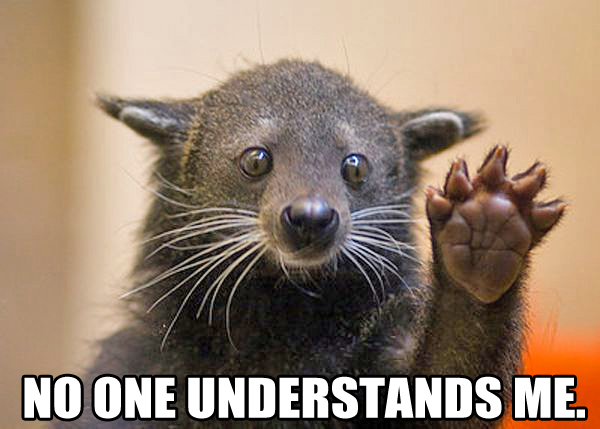 When the Eleven Hobby F8F Bearcat arrived, I couldn’t wait to tear into it.  Upon opening the box, I knew that it was going to assemble extremely quickly.  You are warmly greeted by a one piece fully assembled wing, a fully assembled fuselage with molded in dorsal, a pair of stabilizers and a carbon tube, a small bag of hardware and a pair of props.  Truthfully, the airplane was assembled in about 20 minutes I think and was extremely straight forward.  The fit of all of the parts is excellent having minimal gaps between the intersecting parts.  This is probably one of the best fitting foamies that I’ve assembled truthfully.  The top forward fuselage and canopy are removable (hatch line is almost invisible) which reveal a huge space for batteries, etc. inside the fuselage and the hatch is especially clean and impressive in terms of the fit.  Radio programming was just about as quick as assembly since I copied the program I had already setup from my “Lady Alice” P-51 and simply adjusted the rates and servo directions accordingly for the Bearcat. 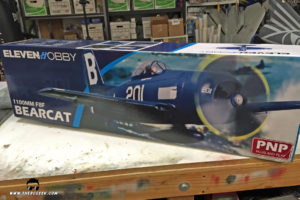 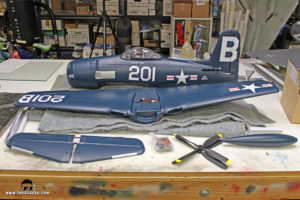 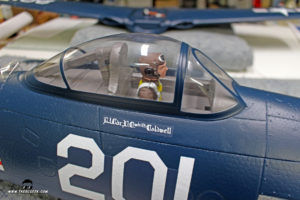 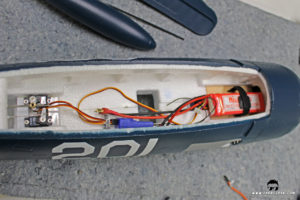 The overall finish of the Bearcat is quite nice.  It has a little more foam texture than some of the other EPO airplanes I’ve handled, but it’s really not significantly different in that respect.  The color and markings are well done and the shape appears to me to be quite good (tails might be a little large maybe).  There’s no mistaking this one as anything other than an awesome Bearcat!  They’ve also done a good job with the landing gear stance.  The main gear on the full size are quite complex (the strut actually folds as it retracts) and so the compromise they made with the standard gear and the location they chose still pulls off the looks of the ground stance very well.  Also, they have appropriately sized tires!  Most of the time, you get tires that are just way to small on these ARFs.  Lastly, the flap design is nice and scale having an upper surface scoffer and seal as opposed to just an open notch that you get with most foam warbirds. 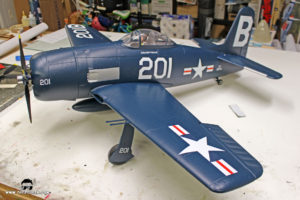 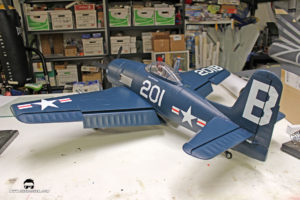 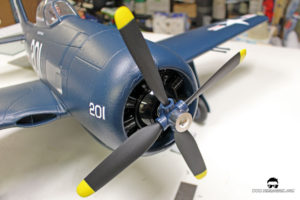 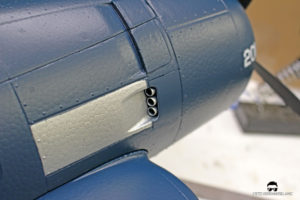 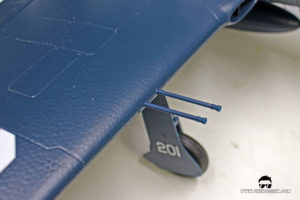 I did have a couple impact marks on the airframe from shipping unfortunately.  Most notably, there were a couple creases at the front of the cowl top and bottom.  There was a large rounded corner on the outside of the box that I noticed as I opened it up initially.  My guess is it got dropped on it’s way to me, landing on the box corner and that’s what caused the small creases in the cowl.  There was also an impact mark on the top left wing which I think is where the wing and fuselage actually contact in the box.  Overall though, the packaging is very good and the blemishes were small. 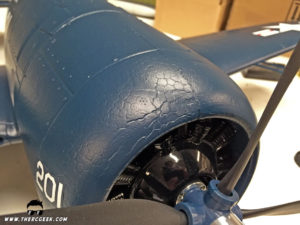 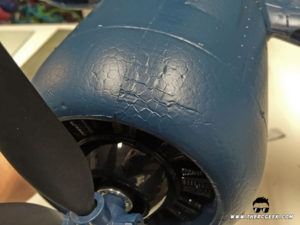 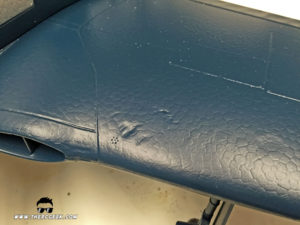 In setting the aircraft up, I noticed that with the recommended 3s 2200 mah battery pushed all the way forward in the battery area, the airplane CG falls out tail heavy.  Based on this, I added a small amount of nose weight.  I was also concerned about the recommended CG being a bit aft too since Chinese ARF manufacturers love for 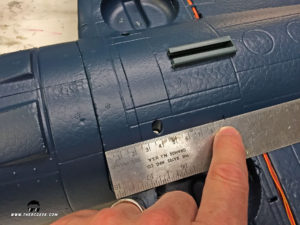 you to fly tail heavy airplanes.  So, for the first flights, I had 1.5 oz of ballast weight in the nose behind the dummy radial engine.  After a couple flights, I dropped it down to .75 oz and that’s where I kept it.  This gives a CG location of about 85-90mm measured aft from the leading edge of the wing saddle and this feels good in the air.  Note that this is still slightly forward of their recommended CG location.

For the control throws, I setup triple rates using the recommended high and low rates in the manual.  I ultimately found that the low rates were good for my style of flying and kept them there for the duration of my flights.  I don’t like to setup my airplanes super hot, but more for smooth scale type flying.  Also, I added a little expo all the way around which helped tame the response around center a bit.  Being such a small model, I found that adding the expo helped it feel “bigger” in the air.  So, here are the final throws I have programmed on the surfaces.

Rudder – 5/8″ (I would have preferred more throw, but unable to get it based on the geometry)

Flaps – 7/8″ mid flap, 1-7/8″ full flap (no elevator mixing needed, but note that if you’re too fast when deploying the flaps, the airplane will balloon until it slows down) 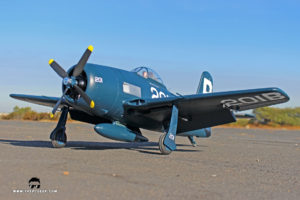 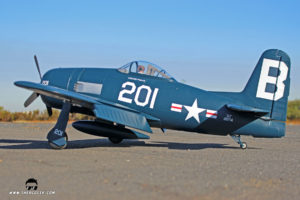 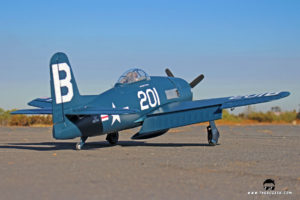 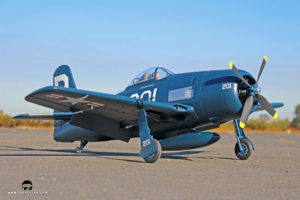 In short, this F8F Bearcat flies sweet!   The airplane has good speed and authority in the air and can perform pretty much any maneuver you throw at the airplane.  Overall performance is very nice providing plenty of power.  Pulling into the vertical, it’s best to start with some speed as she will carry through the maneuver better (energy management)…Don’t expect to accelerate going straight vertical.  With enough rudder, she’ll even do a gorgeous knife edge pass…but you need sufficient rudder to hold a straight line…I wasn’t able to get enough based on the linkage geometry.  Landings with full flap are super easy and soft.  As a good friend of mine would say, “she lands like a butterfly with sore feet!”  Flight times with a 2200 mah pack are easily 5 minutes, but if you’re in the throttle a lot, then cutting it to 4.5 minutes is a good idea.

The airplane is so easy to fly as a whole, it’s a great candidate for someone still learning and looking to start getting into warbirds and is still fun for more advanced fliers too.  As good as it is on 3s, I can imagine that on 4s the airplane would be a real hoot!  I’m thinking I may give that a try at some point, but it will require a speed control upgrade.  The power system on 3s pulls about 35 amps and the airplane comes with a 40 amp controller. 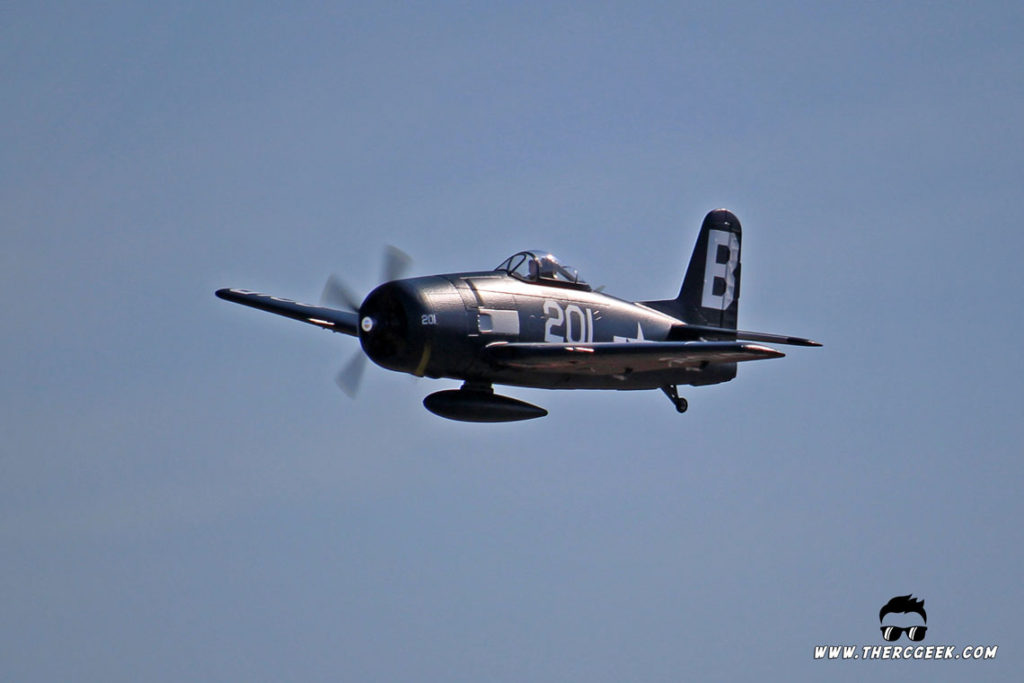 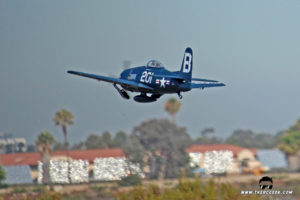 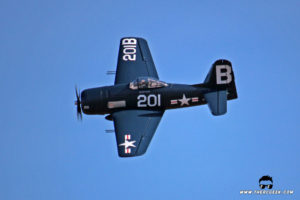 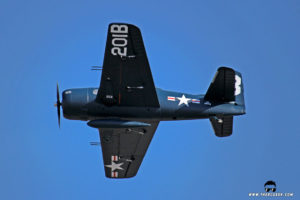 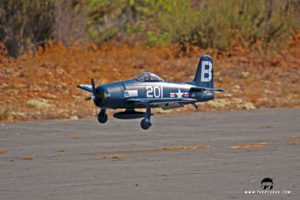 As a whole, the 11 Hobby F8F Bearcat is an awesome little airplane.  She has the looks along with the excellent flight characteristics to back it up!  Being so user friendly, the airplane is a good candidate for folks looking to step into warbirds yet still fun for someone with more advanced skill.  11 Hobby has done a great job on this one, I think she’s a keeper!  Note that the kits do ship from China.  This one took about 2.5-3 weeks to arrive and the shipping cost was about $12 I think.