Welcome back guys!  This month we’ve got an exciting sneak peek review for you guys this week.  A few weeks back, I had a large white and rather unassuming box arrive on my front door step.  Inside was the brand new Avios Grand Tundra from Hobbyking!  Excited at the opportunity to give the airplane a try, I was blown away by just how fun this airplane is, especially with those big ballooney Chuck Norris tires.  They’re so big and awesome, the earth doesn’t push up on those tires, those tires push the earth down as they impale the runway into submission!

This airplane is ideal for some backwoods bush flying from an unimproved surface and when the airplane arrive, I knew the perfect field to give it a try!  I had recently discovered a dirt RC field nearby my house which I knew would be perfect for the airplane. 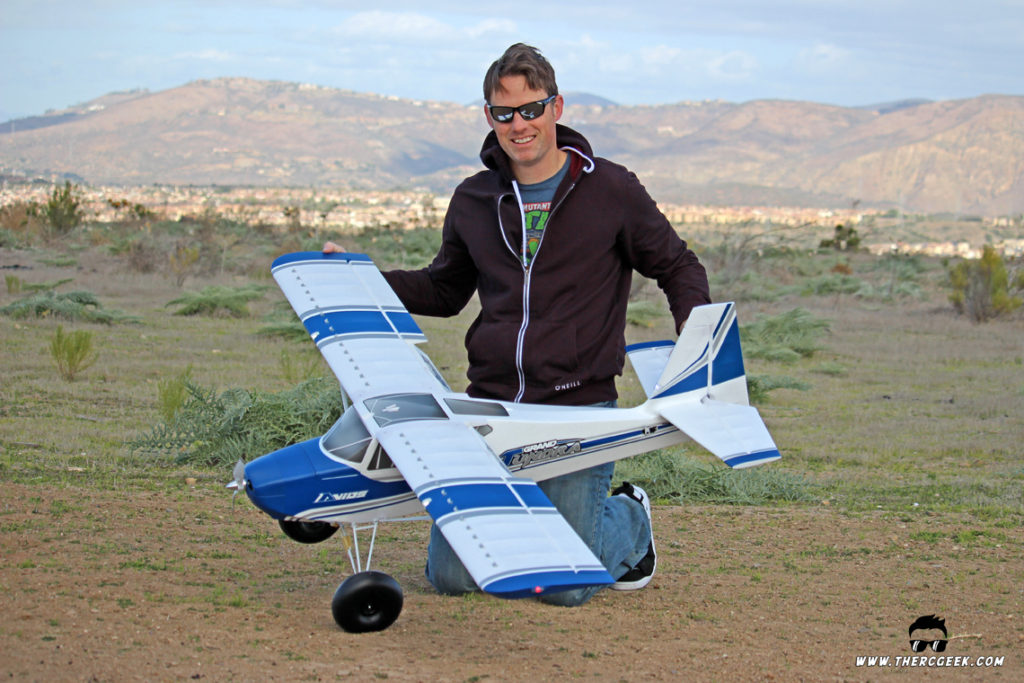 Opening the box, the airplane is nicely packaged and looks good as there are a number of parts and they are all packaged well.  One of the things I really noticed was as a whole the foam finish is pretty smooth.  I didn’t have any instructions in the box, but I was able to get the assembly completed without too much of an issue without them.  This was an earlier production sample, so I’m guessing that the instructions may have still been in work or will be a digital download.  That said, I think it’s worth talking through the assembly a bit in some detail. 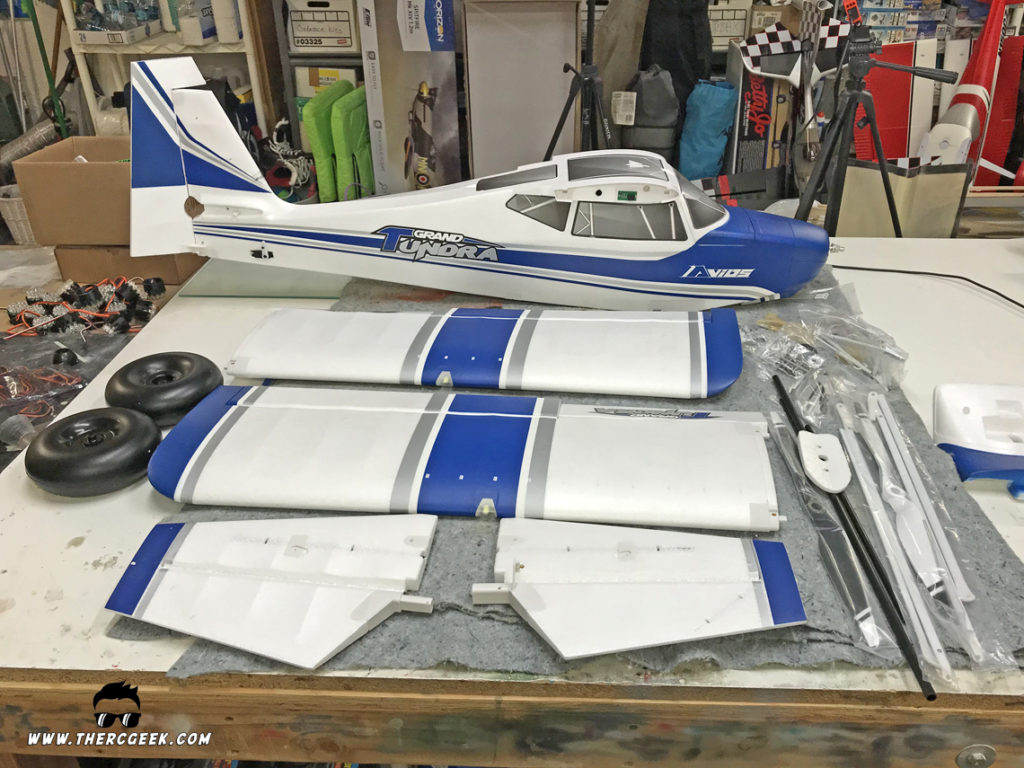 The assembly started by first installing the landing gear onto the fuselage.  The fasteners are all packaged with the gear, so that is something to be aware of.  The gear cross braces for the two sets of struts were added by slipping the fastener through with the tubing spacer inside the brace and then fasten the nut down.  From there, the gear were fastened onto the fuselage with some 3mm machine screws.  Lastly, those awesome balloon tires were put on and the rubber bands wound around the hooks on the gear which create the tension for the shock gear.  Two rubber bands were used on each side.  The Chuck Norris tires are a nice soft foam rubber, and really work nicely on rough surfaces, especially adding in the suspension from the struts! 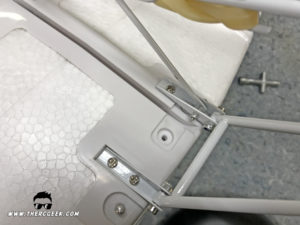 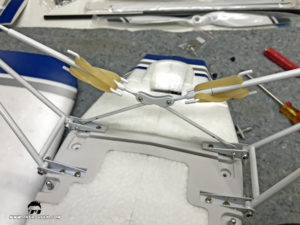 From there, it was on to the tails starting with the rudder.  The surface was slippedd into place and then fastened down through the fastener hole for the hinge pivot in the fuselage.  From there, the tail wheel assembly was installed using the supplied screws and then the centering springs added.  Finishing up the empennage, the horizontal tails were slipped into place over the carbon spar and fastened down.  There are 7 screws total for this.  2 at the root of the tail to fasten to the fuselage, 4 to fasten the support struts and then one to fasten the two elevator halves together. 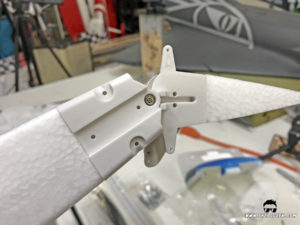 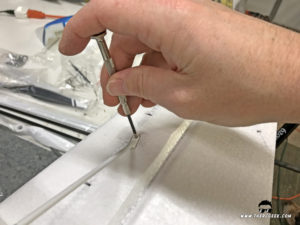 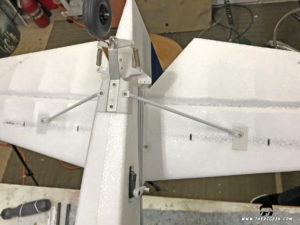 The wings were installed slipping them over the carbon spars and using the supplied 3mm machine screws.  The wing support struts were then added and were held in place using cotter pins.  Note that you do have to screw the two wing braces together before putting them on the airplane (they come separate in the box).  The cotter pins were pretty tight at the fuselage junction, so some needle nose pliers were helpful in getting everything together.  Otherwise, that was the heart of the assembly. 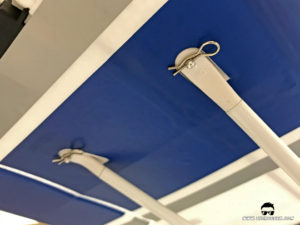 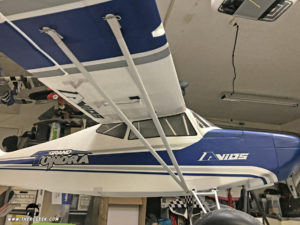 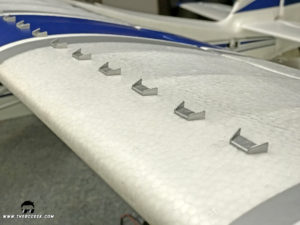 To wrap it all up, the servos were connected and setup, the prop was installed, and the final radio install and CG performed.  The tails use an ez connector type setup to connect the pushrods which is nice and then the wings use a z-bend.  Also, all of the vortex generators were added as well by putting them in place and then gluing with some thin CA.  These are there to intentionally turbulate the flow to avoid getting laminar separation.  So what you get is an airplane with really good slow speed characteristics.

As a whole, the assembly was simple and straight forward.  I did have a bunch of spare fasteners, so hopefully this thing holds up!…  Actually the airplane is setup for optional floats and FPV, so I’m guessing that’s what those bits are for.  The airplane is a great size and really takes up a lot of space on the bench and looks good doing so.  There’s no question looking at the airplane and how it’s proportioned that it is a good flyer.  It definitely has a good bush plane look to it and the color scheme is decent.  Plus it has lights throughout which is a nice feature as well. 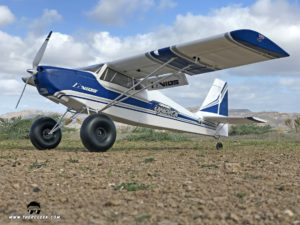 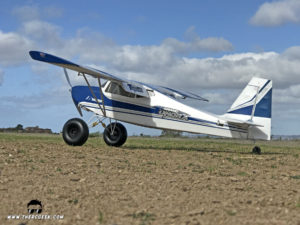 A couple things to note are that the airplane does come with two propellers, a black 17X8 for 4s and a white 16×8 for 6s (differences discussed below).  I did have a little smudge on the white prop from what looks like packing it a little too soon, but that wasn’t a big deal for me.  Also, I did have an issue with one of the flap servos not working properly.  For whatever reason, it wouldn’t generate any torque in the mid range positions being very easily overpowered.  It would operate ok at the max deflections, so I just went that direction so as to get the airplane in the air quickly for this review.  It will get replaced as I do like having the option of a mid or takeoff flap position.

In terms of the control surface setup, not having any instructions, I took a notional guess from the start and actually found those rates to be about perfect for my style of flying.  I always recommend setting up multiple rates which allows you options during a maiden should any control axis be too sensitive or not enough.  Then, once flown you can tune the rates to the desired feel in the air.  The airplane is surprisingly aerobatic and does anything you would want to do with it.  Ironically enough, think 1″ for your starting rates and then tune from there.  These were my mid rate settings and I didn’t find reason to change them at all following the maiden.  That being said, certainly consider these as a starting point.

For rudder, 1″ with 15% expo to desensitize the steering

For Flaps, 1-1/2″ max with no elevator mixing.  I usually like a mid setting, but I had a servo issue that kept me from doing that.  I’ll eventually replace them, but I didn’t find any need for a partial flap setting really.

For the CG, I found that 60mm as measured from the wing leading edge aft was about perfect.  This actually equates to where the forward wing brace pin is on the underside of the wing.  So, simply lift the airplane with your finger tips on that pin and look for the aircraft to be level or have a slight nose down attitude and you’re good to go.  As you fly the airplane, you can look at moving the CG back if you like as it was maybe a touch nose heavy there, but I really liked it at that location.  For batteries, I’m using Roaring Top 35c 5800 mah packs both 4s and 6s.  For the 4s pack, the battery ends up completely forward in the battery bay as you can see.  And then the 6s pack falls in a little further aft as you can see here.  With these packs, I have my timer set at 5 and 1/2 minutes and I could probably fly for another 5 minutes easily if I wanted to. 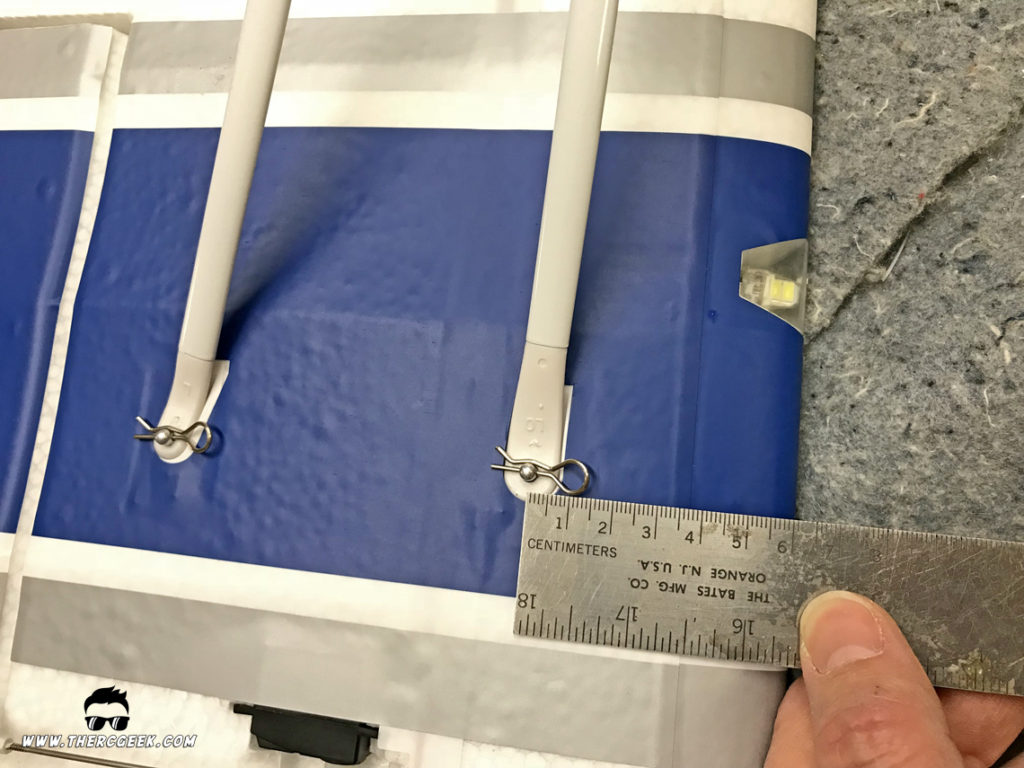 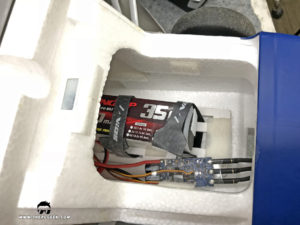 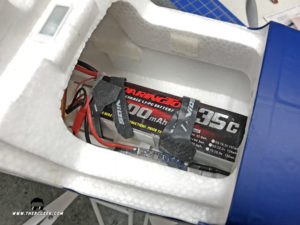 I wasn’t sure what to expect from this airplane when it arrived truthfully as I didn’t know much about it.  I tell you what, the Grand Tundra is pretty darn awesome!   As a whole, regardless of 6 cell or 4 cell, the airplane just flies great.  The shock gear work great and really help on unimproved surfaces.  It’s extremely aerobatic and has great power.  On 6 cells, the airplane is just ballistic.  It’ll get off the ground in about 2 feet (no joke!) and climb straight up with pretty much unlimited vertical.  It’ll hover if you set it up right and do just about any kind of flying you can handle.  It’s actually quite quick too.  On 4 cells, the airplane has a much more scale like power to weight ratio and flies more like a true Alaskan bush plane.  It still gets off the ground in short order and has good vertical, just not the unlimited you get on 6 cells.  The top speed was maybe 80% of what you get on 6 cells as a guess which was still pretty good at full throttle.  The interesting thing is, you definitely feel the weight difference between the two setups and I actually preferred flying the airplane on 4 cells a little bit more.  It makes for a bit more of a challenge in the air forcing some of that energy management.  Plus, at the lighter weight, it cruises around partial throttle wonderfully for those touch and goes.  The one flaw we did find as we flew the airplane was that the aluminum used for the tail wheel attachment is really soft and bent pretty easily.  We flew the airplane a ton while we were getting video and we were regularly bending the tail wheel back into place. 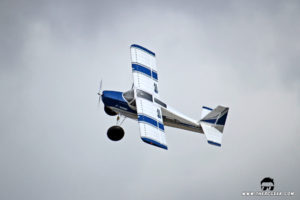 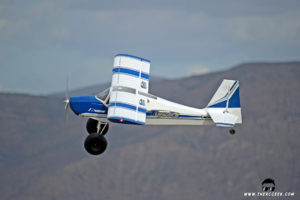 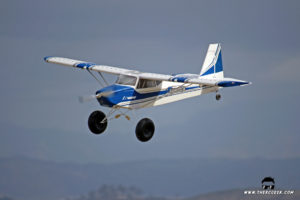 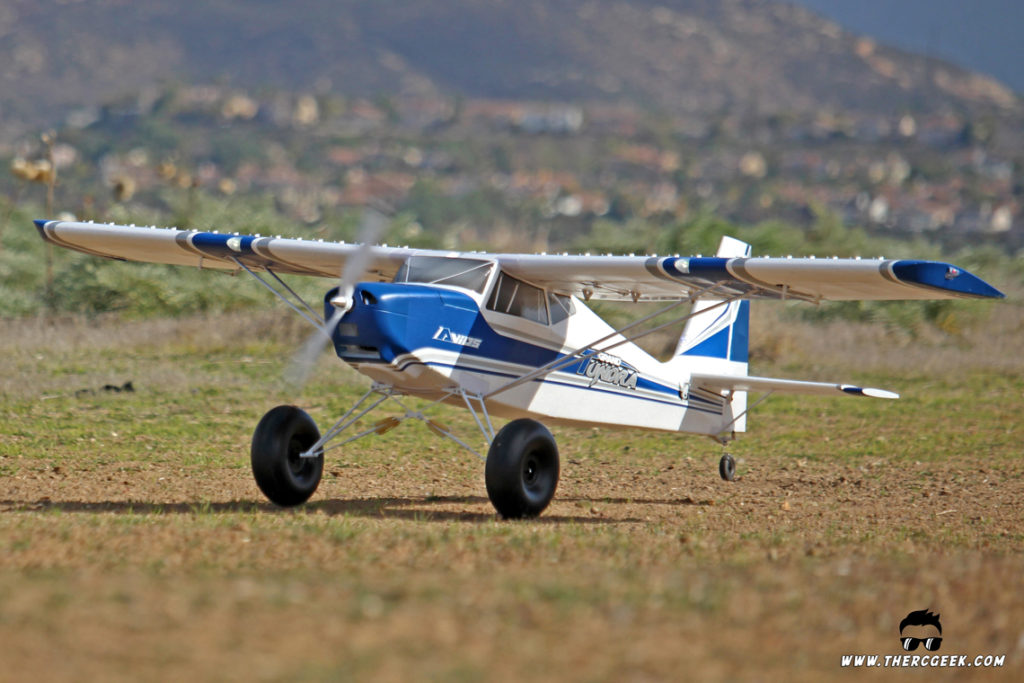 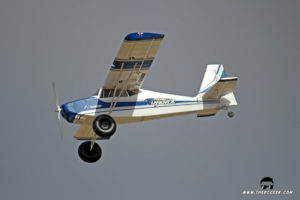 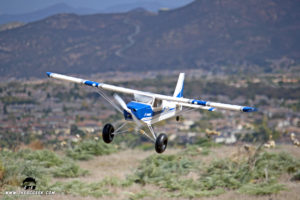 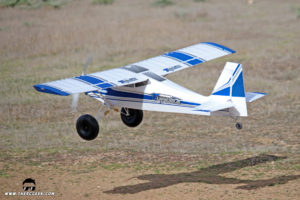 Shortly before this airplane arrived, I had discovered a new dirt field fairly close to me and I knew that this would be the perfect spot to showcase this Grand Tundra and show off those Chuck Norris tires!  Below are a couple flight videos of the airplane on 4 cells followed then by 6 cells.

So, there we have the Avios Grand Tundra.  This is a really fun airplane, that flies awesome!  It’ll be fun to see what folks do on the FPV side too as there’s hardware and a canopy hatch that allows that to be setup.  The other thing is, it’s nice to have options on the power system too as this allows you to really tailor your flying experience whether you want a more 3d kind of experience or something powered more like a scale airplane.  So, at the end of the day, this airplane looks good, flies good, and I think is Chuck Norris approved!   See you at the field!