Yes, I love technology…always and forever…

In this article, we’ve got something a little bit different we’re talking about, the new E-Flite V-22 Osprey! With the advent of the quadcopter technology and the miniaturization of it all, it really opens up some great opportunities for a model like this and it’s pretty awesome!  A tilt rotor is an extremely difficult challenge to overcome in full scale so imagine what it would take to truly scale that down in miniature.  Well, E-flite has leveraged their vast experience in VTOL aircraft and really put something together that is simple and effective right out of the box…not to mention just looks incredibly cool in the air!

The full scale V-22 is a pretty amazing aircraft that really is an incredible technological achievement to come into full scale production.  The V-22 did have a few teething problems during development but the aircraft is common place now and I see them flying quite regularly around town since they operate out of Miramar.  I can tell you, it’s a unique looking and sounding aircraft to see in the air. 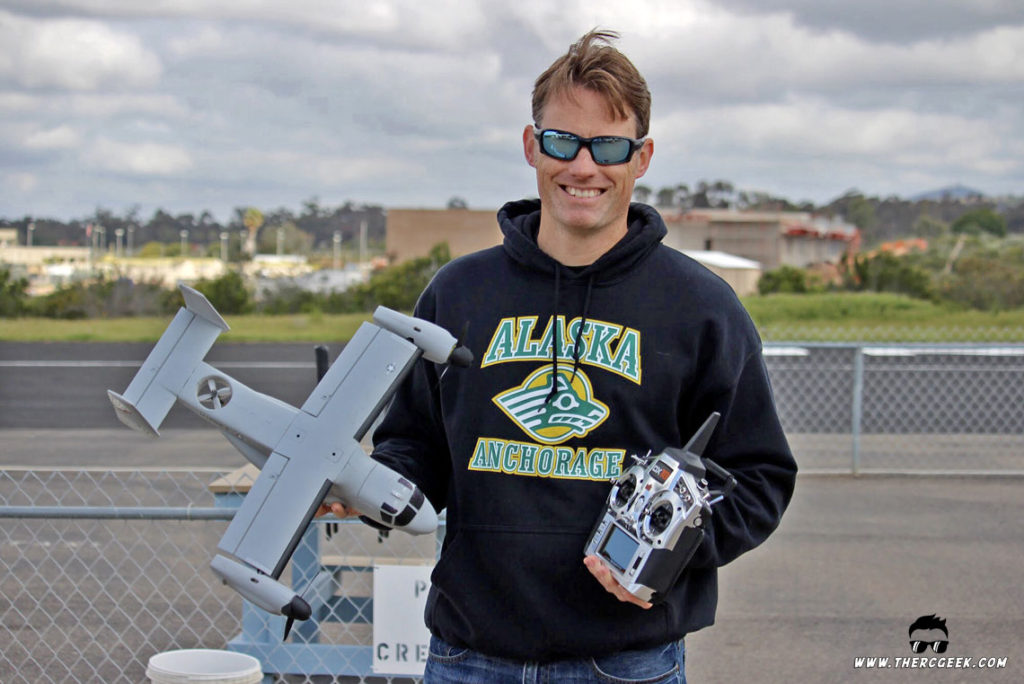 This is the Bind N Fly version, so in terms of what you get in the box, it’s the aircraft ready to go with the included accessories.  All you need is a Spektrum transmitter and a 3s flight battery to get it flight ready.  The Osprey is firmly packaged in the box and you’re greeted with the unmistakable shape as you open it all up.  Also in the box are a set of fixed removable landing gear, the instructions and a big assortment of markings.  It’s painted in a nice two tone camouflage which looks decent and the shape of it looks about spot on to me.  There weren’t really any recommendations in the instructions for where the markings go, so I did a little online research and put something whimsical together that I liked based on what was on the markings sheet. 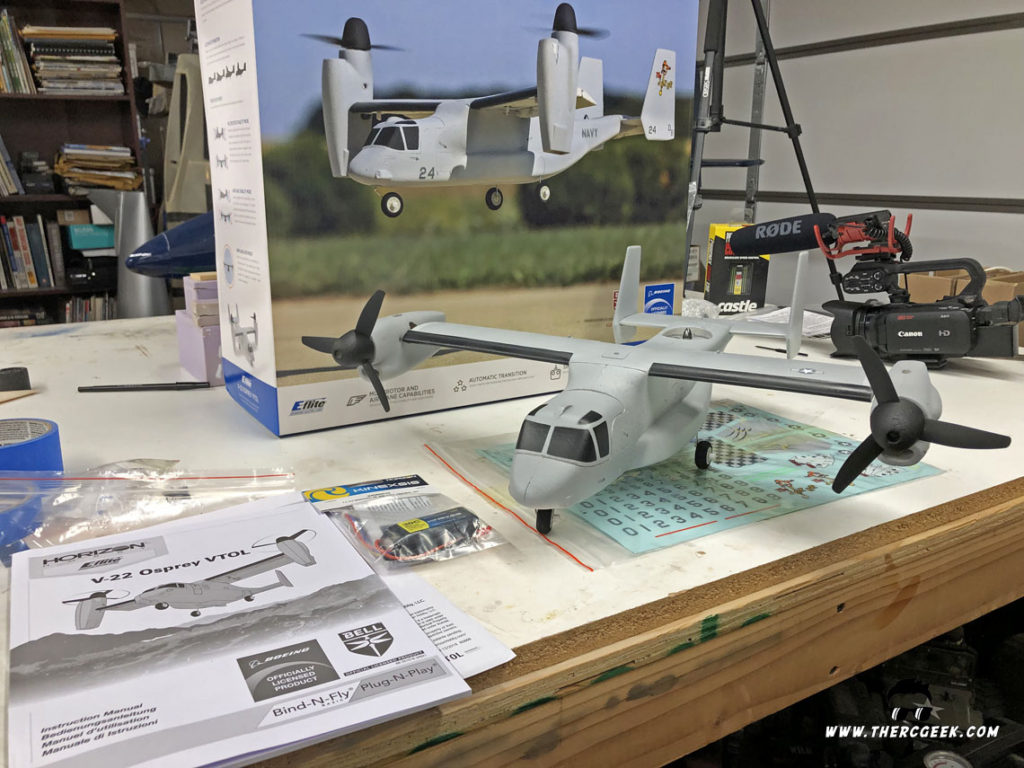 With the Opsrey on the bench, it’s such a cool looking little aircraft, E-flite’s done a great job with it.  It’s setup with the two wing tip rotors with fixed pitch props along with a third fan in the tail which essentially makes it a tricopter in the hover mode, similar to the e-flite convergence designs.  This really simplifies the hover mode and also allows e-flite to leverage their existing technology which is smart.  It has removable fixed gear and the nose wheel is castoring.  So, with the differential thrust on the ground, you can actually steer it. 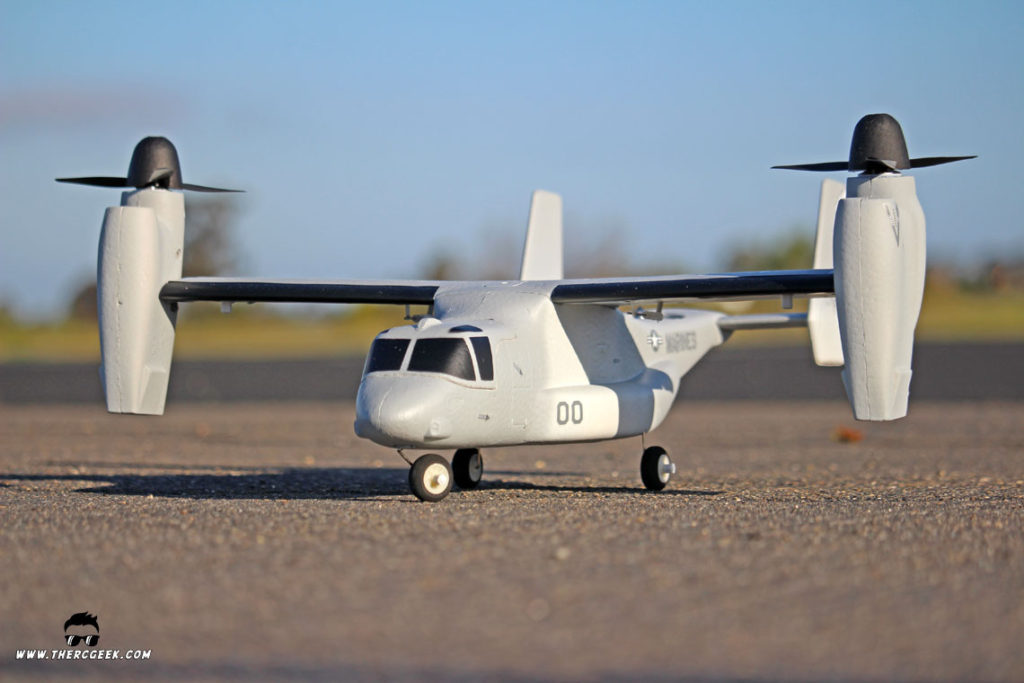 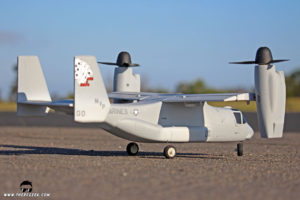 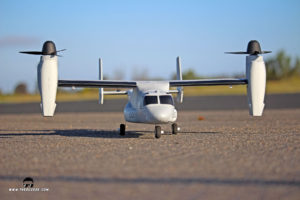 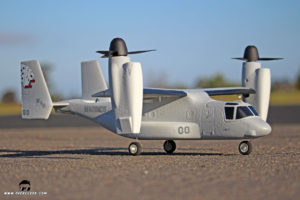 In terms of the finish, it looks good and with some markings on, definitely makes it look the part well.  There is some foam texture coming through, so it’s not the smoothest aircraft I’ve played with, but it’s not too bad.  You really only notice it in certain lighting.  In terms of the size it is of the UMX variety as it’s about the same size as the UMX A-10 roughly.

One other item to note is that it has a connection for FPV if that’s something you’d like to play with.  I can imagine it would be pretty fun with the aircraft.

In setting up the Osprey, there’s really not much to do, but there are some things that are worth discussing.  First of all, for the Bind N fly, the instructions for the radio setup are on page 4 of the manual.  Follow those and you’ll be good to go.  I set everything up per the book and didn’t mess with it at all.  E-Flite recommends setting the rates at 100% for high and 70% for low with 10% expo on everything.  Using the triple rates on the DX18 I set a middle rate at 85% as well.  My preference flying the aircraft was to fly with the mid to high rates primarily.  In terms of how the rates work it is not traditional to a typical aircraft, in that the rates don’t change the max travel on the servo like you would expect.  Instead, the rate change changes the servo response time through a delay which I found interesting.  So, the controls at 100% will get to the end points quicker than the controls at 70%.  So, be aware that if you’re adjusting the rates don’t see and change to the surface travel, that’s what is physically happening at the model.  I’m sure this is all based on the configuration and keeping things such that you can’t get into an out of control situation. 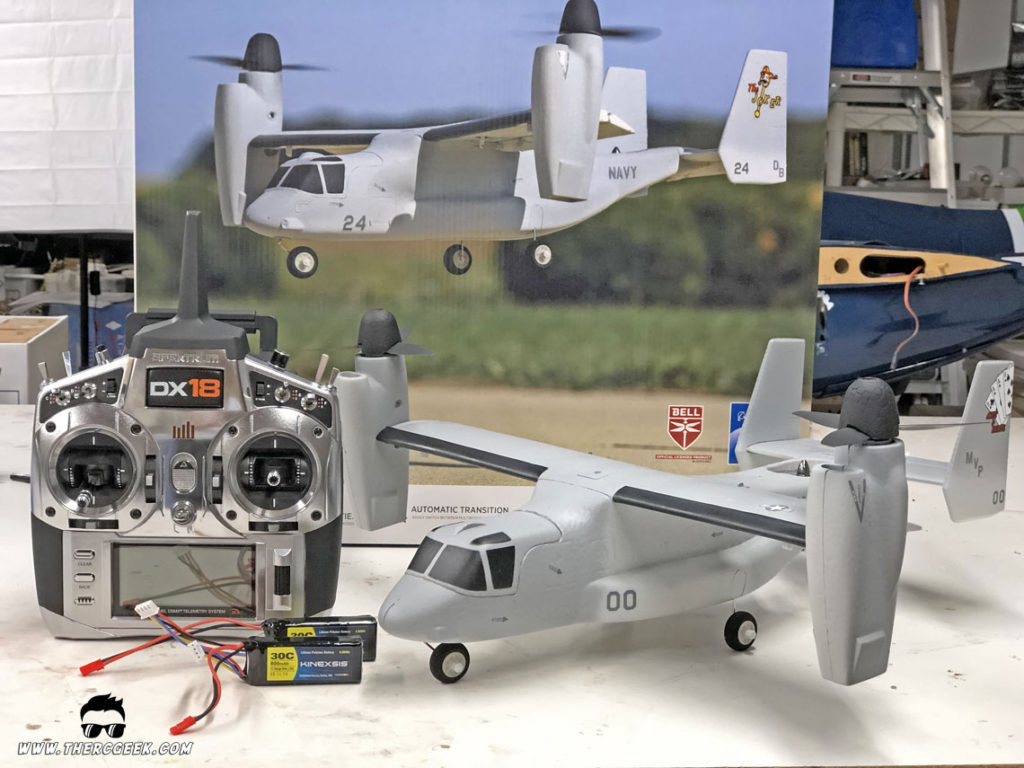 The other thing to talk about are the flight modes.  E-Flite recommends setting this up on a 6 channel system which are necessary for the flight modes switch and throttle cut.  The flight modes consist of the hover mode where the Osprey flies just like a quad copter, stability mode which will bank and pitch limit the aircraft in forward flight similar to SAFE and full acro mode which removes those angle limits allowing you to perform vertical and rolling maneuvers.  This is all described in the instructions and I highly recommend just setting the vehicle up as they state, it’s simple and it works. 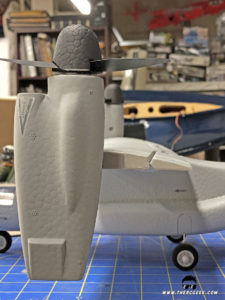 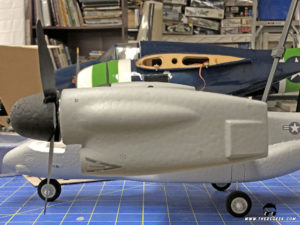 In terms of the CG, this was again per the manual which shows 25-30mm as measured from the wing root leading edge aft.  I’m flying the aircraft at about the 30mm mark.  With the recommended 3s 800 mah battery it’s placed about 1/4″ aft of the front of the battery bay. 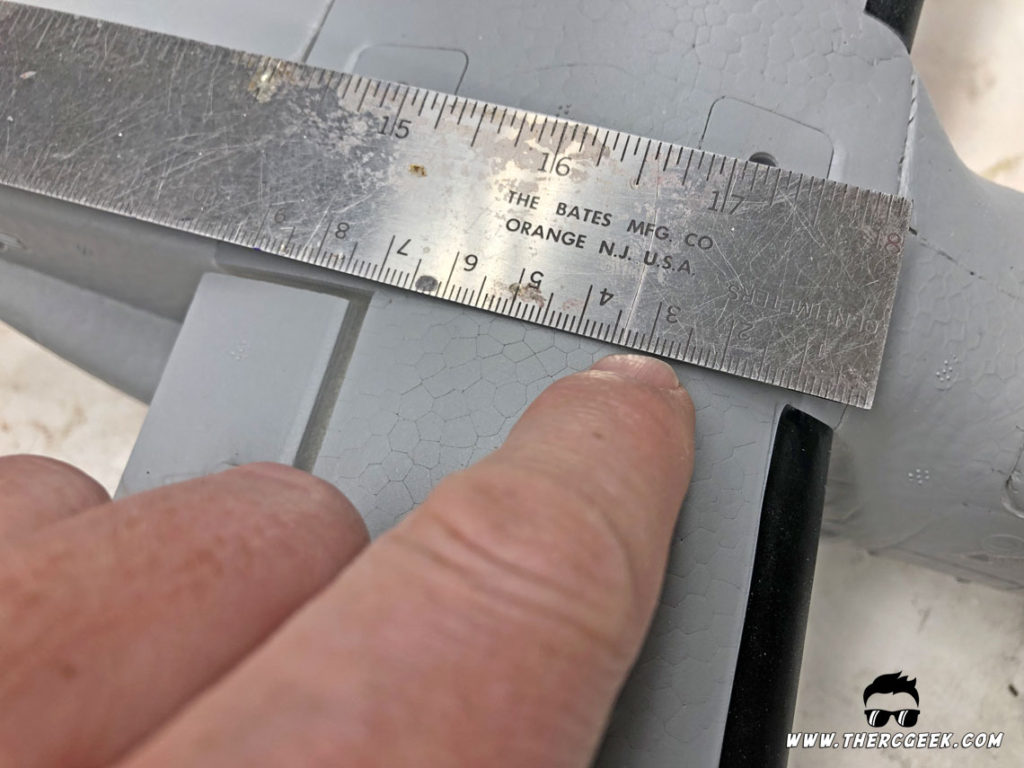 In terms of how this Osprey flies, it flies really well.  E-flite has done a great job at making a challenging aircraft simple to fly.  The hover is extremely stable and easy to maneuver flying basically like a quadcopter.  If you have some heli or quad experience, it’ll be easy to pick up.  Having the Osprey shape on there really helps with the orientation for me.  I did the initial hover test out in front of my house and seeing it in the air I was literally giggling like a little girl, it was so cool to see. 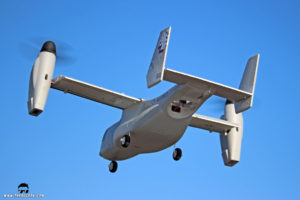 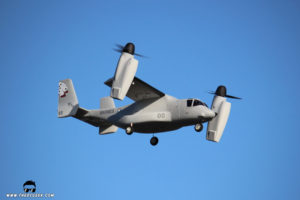 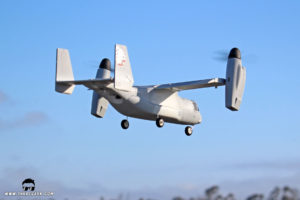 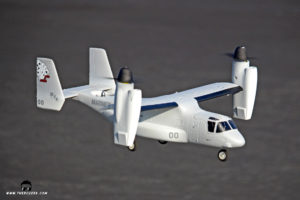 With regards to the transition, this is all handled automatically through the flip of the flight modes switch which is really nice and makes it simple.  It’s important to be patient on the switch as I recommend keeping it in stability mode until the Osprey has fully transitioned to forward flight and then going to full acro mode.  This’ll just help ensure things transition as smooth as possible.  Also, it’s best to have the Osprey stabilized straight and level with minimal tx inputs before initiating the transition.  It is worth mentioning that I noticed that this one was yawing to the right in the transition (first transition actually ended rather abruptly 😉 ).  That was a result of the nacelles being slightly asymmetric, so definitely check that out of the box.  All that was required was a quick adjustment of the pushrod length on one side to symmetrize the nacelle positions to each other. 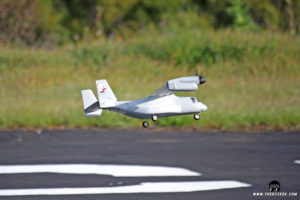 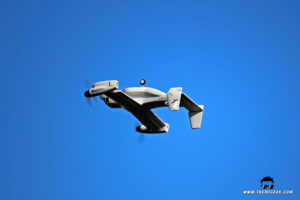 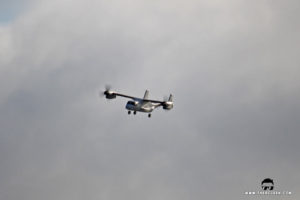 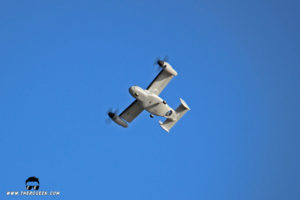 In forward flight, you have a fully functioning airplane here.  It’s such a unique shape to see in the air with those dual wing tip rotors and I was really digging it. This little guy has fantastic power and good responsiveness in acro mode for basic aerobatics like rolls and verticals which is really all you need.  Flying it around, I was really having a good time doing big vertical maneuvers and variations of rolls in addition to just flying it around.  It is small and quick and so you do have to stay ahead of it in the air but I didn’t find it hard to fly at all.  That said, I do recommend some decent aircraft proficiency before going into full acro mode.  That’s where the option of the stability mode is really nice.

I tell you what, this E-Flite V-22 is just something else!  It’s such a cool piece of RC technology that looks good and flies well.  It’s such a fun concept to have in RC and is no doubt guaranteed a unique addition to the hangar.  I do recommend having some aircraft proficiency before going into acro mode for best success, but you do have the option of the stability mode if you’re not there yet.  Just make sure you’re using the 100% dual rates in stability mode for the most responsive setup.

If you would have asked me 5 years ago if we would have a V-22 available common place at the field, especially at this size, I probably would have doubted the feasibility.  But we’re there and the technology that goes into this opens up so many opportunities.  So enjoy it!  Until next time, I’ll see you at the field!