E-flite’s 64mm “SAFE” Aggressor with so much more Eagle!

The F-15 Eagle has been the example of “air superiority” for decades.  Having first flown in 1972, the airplane even now is still an incredible machine with extreme capability that is still in production (due to end in 2022).  Interestingly enough, the F-15 in model form is one of the most forgiving jets out there.  Many an RC jet pilot have cut their teeth on various sized and powered F-15s throughout the last couple decades.  So, it makes sense that E-flite would introduce an F-15 Eagle to their growing 64mm size EDF range featuring SAFE.  The airplane features fixed gear even for pavement operations, but is easy enough to chuck around without the gear when desired.

The E-flite F-15 Eagle is packed neatly and compactly in the box and is very simple to assemble.  It starts with the wings being fastened in place, the optional fixed gear installed (if desired) and is finished up with the horizontal and vertical tails being glued on and the pushrods connected.  The removable fixed gear are a nice to have since I fly mostly from pavement, I can avoid scraping up the airplane (and hand launching all together since I’m terrible at it). 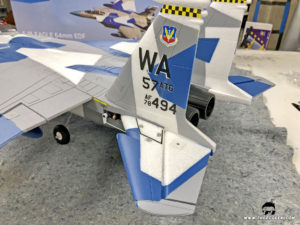 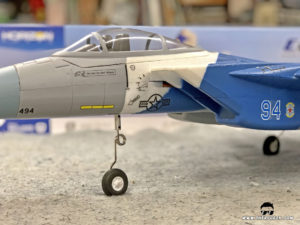 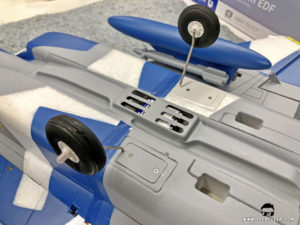 The airplane all together on the bench really looks good in the 65th Aggressor Squadron splinter camouflage paint scheme (Blue Splinter FTW!).  The paint is applied very well and cleanly and the finish provided is quite smooth.  It’s a small airframe, but actually struck me as being larger than I had expected once it was all together. 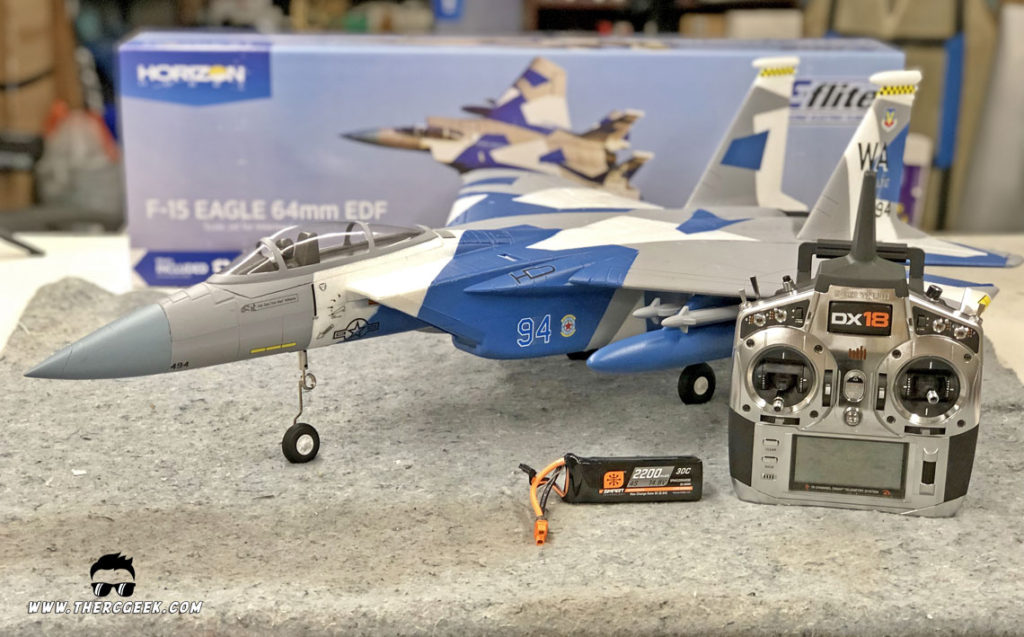 For the aircraft setup, this is the bind and fly version of which means it includes SAFE select.  Be sure to check out my previous discussion on setting that up.  The thing to keep in mind is that there are two bind procedures.  In my case here, since I wanted to do some hand launching of the airplane, I decided to bind the airplane with SAFE on.  This is done by starting the bind procedure normally, but before hitting bind on the transmitter, removing the bind plug from the receiver.  From there, I assigned SAFE to a switch by cornering the sticks inward and flipping the desired switch 5 times.  I fly the airplane without SAFE solely, but I wanted some auto leveling during some of my hand launches since I’m not very good with that and it worked great!

On the control throws, I found the recommended rates a bit hot, so here’s what I’m using on the airplane. 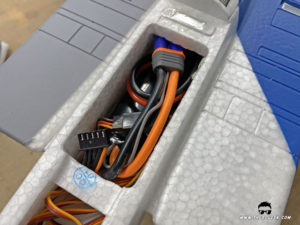 In terms of the CG, I’m flying the airplane at the recommended location which is 88mm as measured from the wing leading edge at the root aft.  I’m using a Spektrum SMART 4s 2200 mah pack pushed all the way aft in the battery area and this ends up working perfectly.  The airplane flies great at that CG location and lands really nicely.  My timer is set at 3:00 minutes and that gives me plenty of reserve flying the airplane as hard as I want. 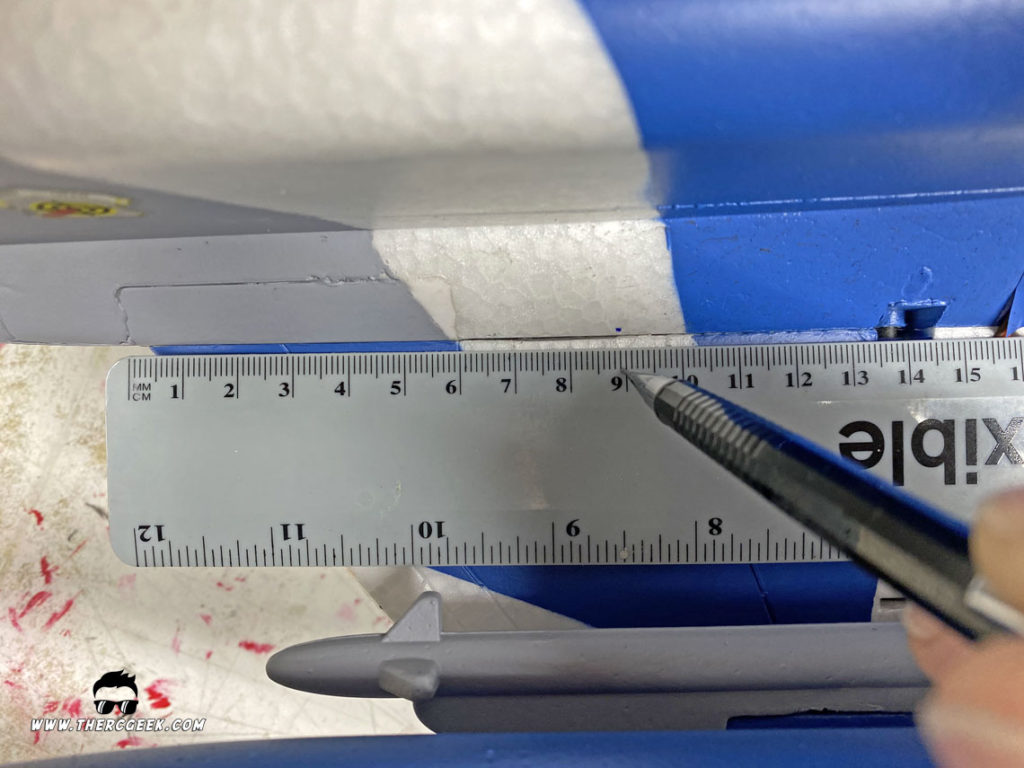 I will say, that I was pleasantly surprised by the E-flite 64mm F-15 Eagle.  I’m not typically one for the smaller airframes truthfully, but the size and performance really makes the airplane a ton of fun!  It flew “bigger” than I expected feeling like a larger model than it is in the air.  In terms of the performance, the airplane has great overall speed and power. Being quite quick at full throttle while pulling nice large vertical maneuvers.  In short, it flies the way an F-15 should.  Interestingly enough, I found that when pulling loops, the gyro setting to be a bit aggressive as I generally have to pull almost full elevator to get the airplane to pull over onto it’s back.  As long as you’re aware of that, it’s not an issue at all and is mostly just something that I was surprised by.  Flying around otherwise, the gyro felt spot on. 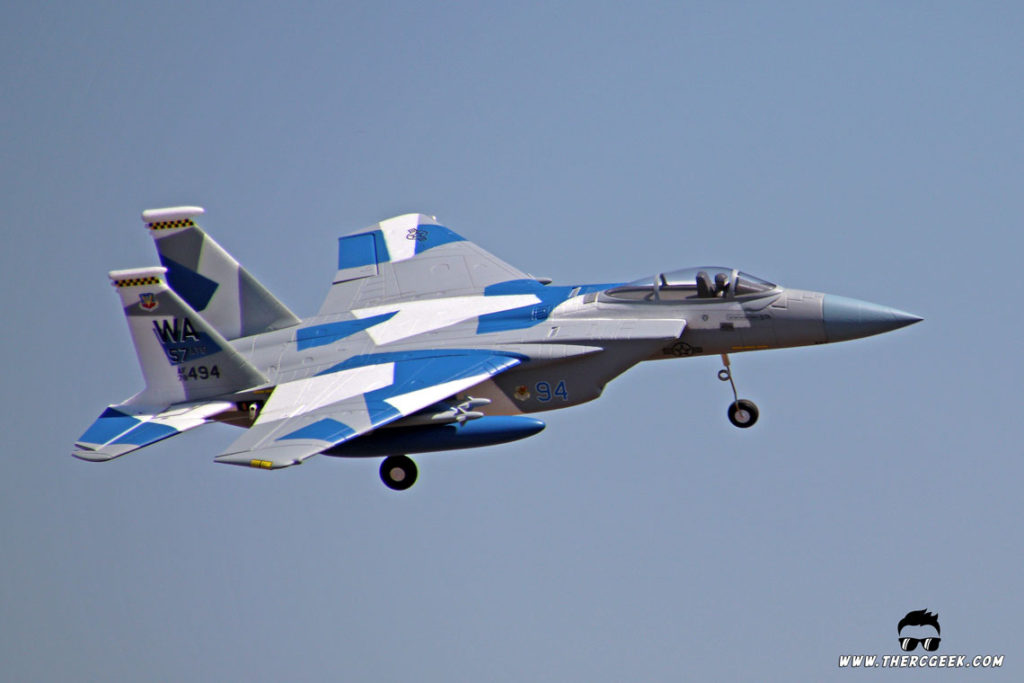 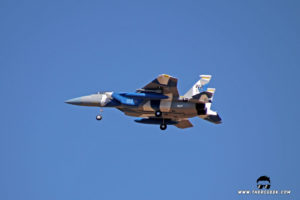 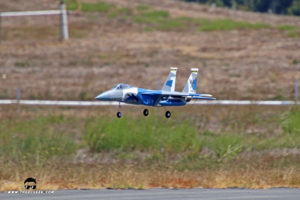 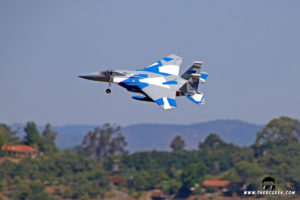 One of the other difficulties I have with smaller airframes is hand launching…I am terrible at it!  So, for this airplane, I was determined to get over my fear of that.  With the help of SAFE to ensure the airplane remains level in the launch, I found the airplane to launch extremely easily.  Since I was flying from pavement, I kept the fixed gear in for hand launching.  In my perfect world, even these smaller models would have retracts! 😉

Here’s a short flight video of the F-15 in action.  This is the stock airplane with the fixed gear installed.  I included a hand launch flight in my review video at the top of this article also if you’d like to see that.  I found that I didn’t even have to toss the airplane much based on the power that it has.

The E-flite F-15 is a bit of a beast in a compact and small package and I like it!  The airplane assembles easily and quickly, flies incredibly well and with the size and removable gear, really offers options as to where it can be flown.   Also, having SAFE really helped train me on the hand launching as well (hooray!).  I’m looking forward to see what E-flite comes up with next this next year!  Until next time, I’ll see you at the field! 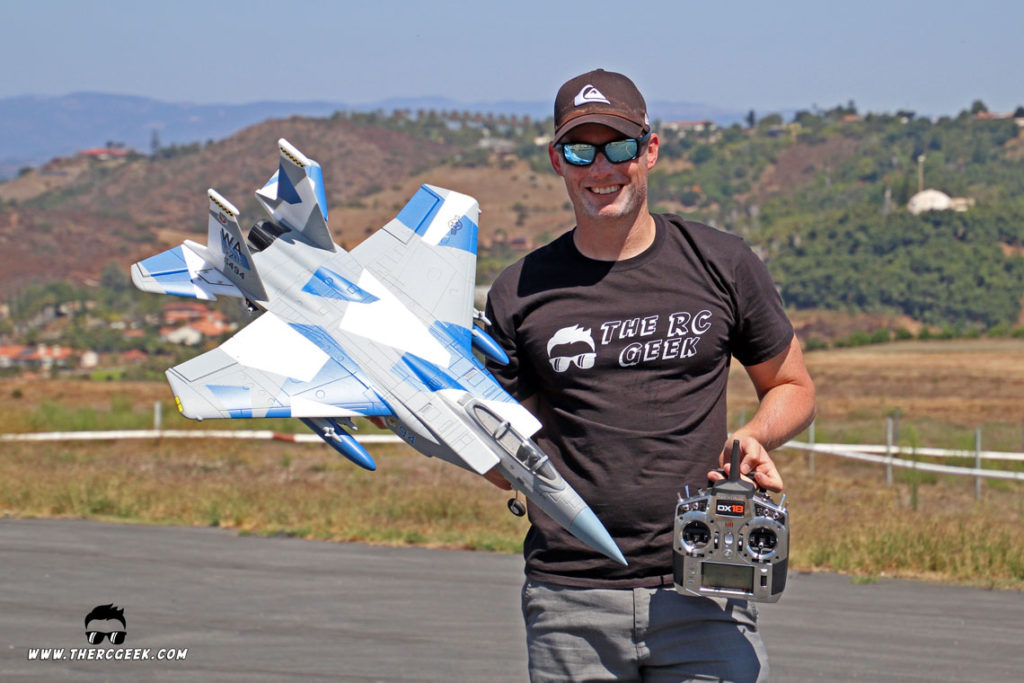