When I think of the axis aircraft from WWII, Kurt Tank’s FW-190 designs are the first that always come to mind.  The iconic airplane was the backbone of the Luftwaffe (alongside the Bf-109) and the number of variants that existed really spawn the imagination of what was and what might have been.  Performance with the twin row BMW radial engine powered FW-190A tended to suffer at higher altitudes, so follow-on variants featuring a longer nose housing a turbosupercharged V12 filled that gap and are the designs that I personally find especially intriguing.

So, seeing E-flite’s FW-190A 1.5m announcement, I was very excited to see the model come to market as the shape combined with beautiful scale landing gear looked to be spot on!  That’s not to mention that the 1.5m wingspan really makes for a good sized, yet still manageable for transport kind of model.  Though the paint scheme out of the box is representative of the replica operated by the Planes of Fame museum in Chino, CA, it’s ripe for a repaint as I can imagine what it would look like with a wartime scheme all dirtied up like a warfighter! 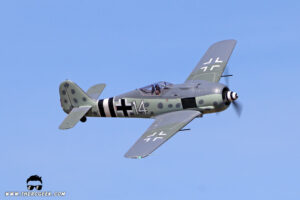 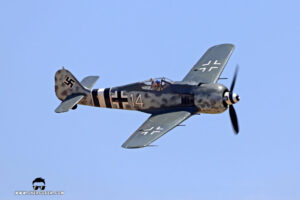 The E-flite FW-190A 1.5m is a nice large airframe that is been broken down into only just a few large components which means that assembly is quick and easy.  Assembly starts with the horizontal tail which is a left and a right piece that slips over a carbon spar and each are held in place with a machine screw each underneath.   The wing center section is held in place (features hard mounted connectors for the flaps/ailerons/retracts) with 4 screws and the outer wing panels are split at the flap/aileron intersection and slide on with a carbon tube and snap into place using some plastic snap-in keepers.  With the outer panels removable in this way, the landing gear remain attached to the airframe which really simplifies the transport while also making assembly at the field extremely quick. 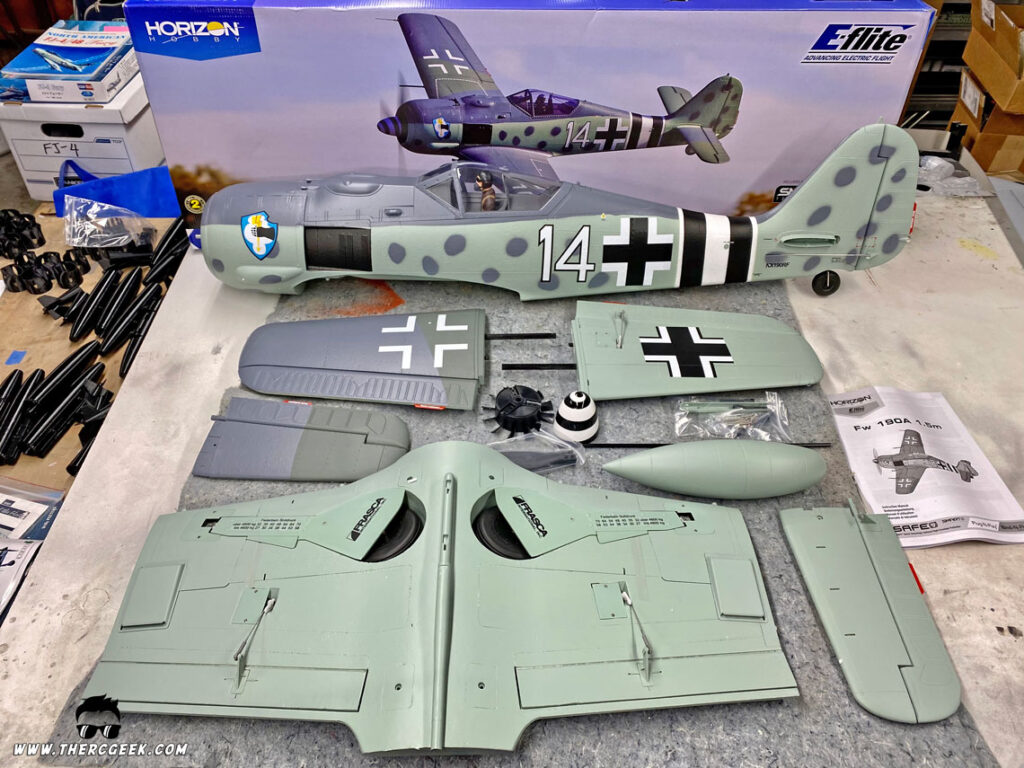 With the airplane assembled and on the bench, it really looks awesome!  The unmistakable shape of Kurt Tank’s FW-190A has been characterized perfectly and the fit and finish of everything is quite fantastic.  The finish is nicely done as well, representing what’s worn on the FW-190A replica at the Planes of Fame museum, but I do wish the colors were a touch darker to match the full scale a little closer and the mottling applied in a little more feathered way.  Nothing a little paint can fix though! 😉 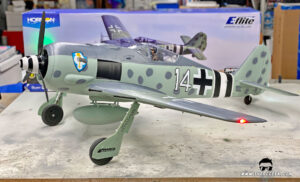 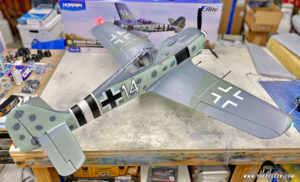 In addition to the nice fit and finish, the airplane also includes some beautiful landing gear details including full shock absorbing struts (at the scale angle) and nice big (and scale) tires.  Additionally, the outer wing panel interfaces and hatch borders are all lined with hard plastic which will ensure they all hold up over time and avoid paint chipping as well.  Lastly, the airplane features a 3-blade prop (albeit a little small), scale shaped spinner and scale cooling fan which are details that are always really nice to see. 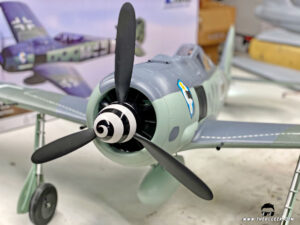 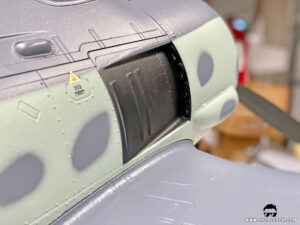 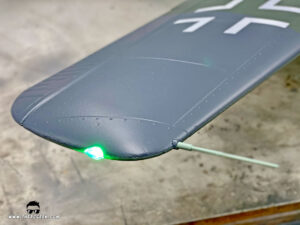 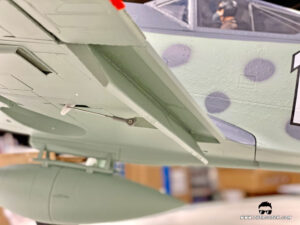 One final item to mention is that the stock tires are extremely hard out of the box.  E-flite does offer a softer tire option for the airframe which I would recommend if you’re flying from a hard packed surface.  The springs in the landing gear themselves are quite stiff, so anything to help cushion the touchdown does help.  I even explored some softer 3d printed tires as well to provide even more cushion on touchdown which worked similarly to the soft E-flite tires. 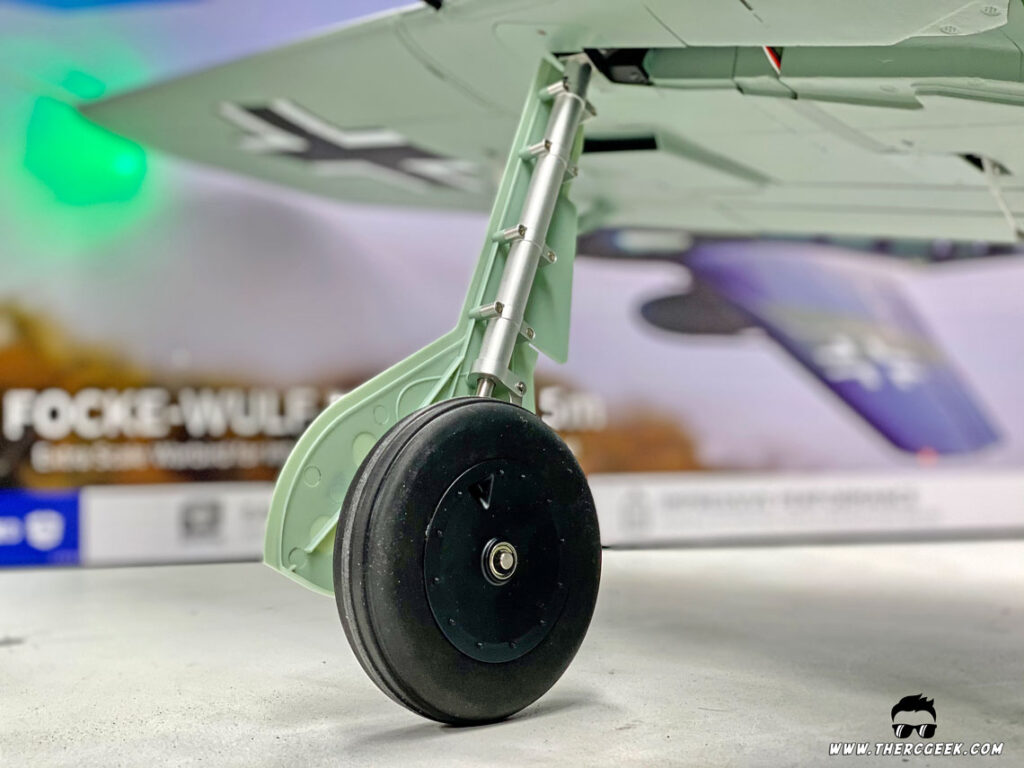 The subject model was the bind and fly version which means that it takes full advantage of the Spektrum SMART technology (discussed a little more further down) as it comes with a SMART ESC and Receiver.  Also, the airplane does feature SAFE as well.  If you’re using some of the newer NX radios, setting up SAFE can be simplified through assigning it in the forward programming menus.  It requires selecting the desired channel to SAFE and then going into the channel assign menus and assigning that channel to your desired switch for SAFE.  This really makes things easy and also allows you to turn on and off AS3X even should you choose. 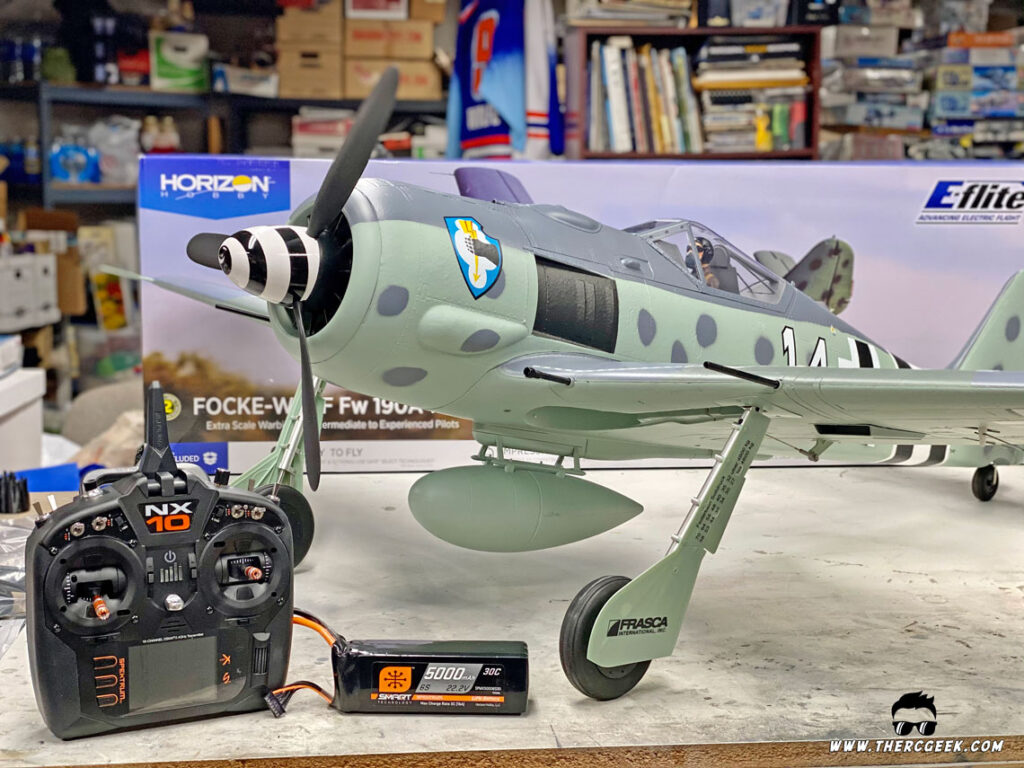 For the control surface setup, the E-Flite control recommendations were a great start.  Through flying the airplane I found that I preferred my mid rate settings for elevator and rudder while keeping the rudder at full deflection.  This equates to the following rates: 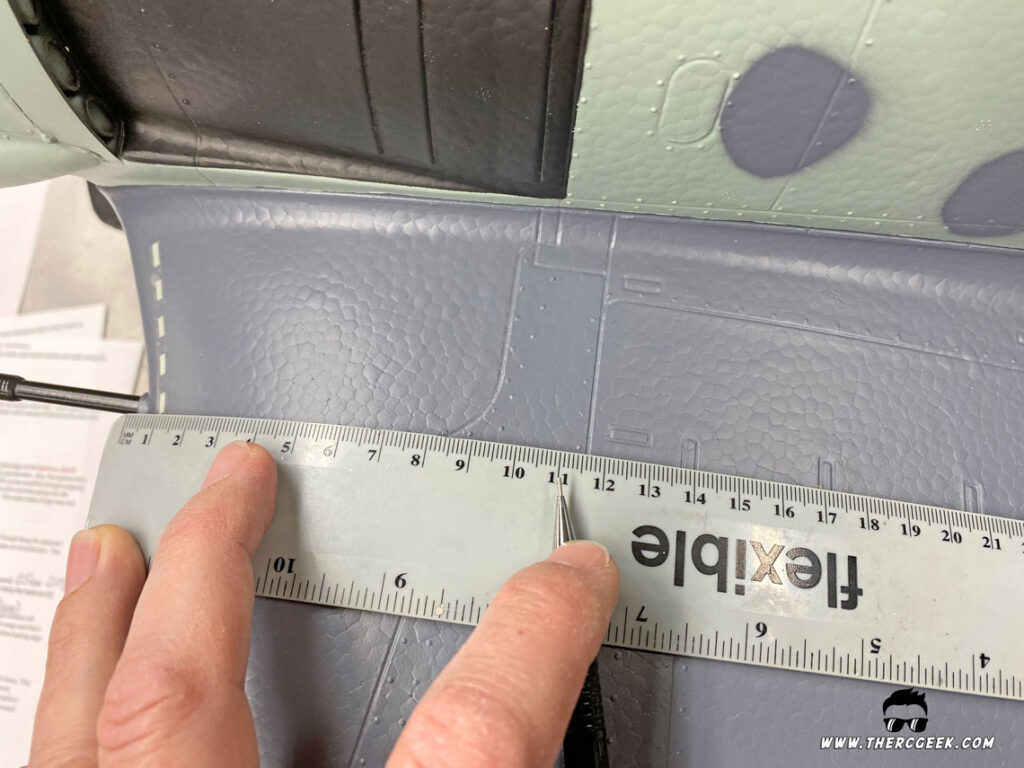 For the battery, I’m using a Spektrum SMART 6s 5000mah pack which provides excellent power and flight times.  This also means that the battery talks directly with the Smart ESC and receiver so that full battery voltage, current, temperature, etc. is downlinked to the transmitter via telemetry.  The model features a sliding tray for the battery (Similar to the E-flite P-51 1.5m), so the battery is placed such that the back of the battery aligns with the forward edge of the tray which provided the perfect CG. 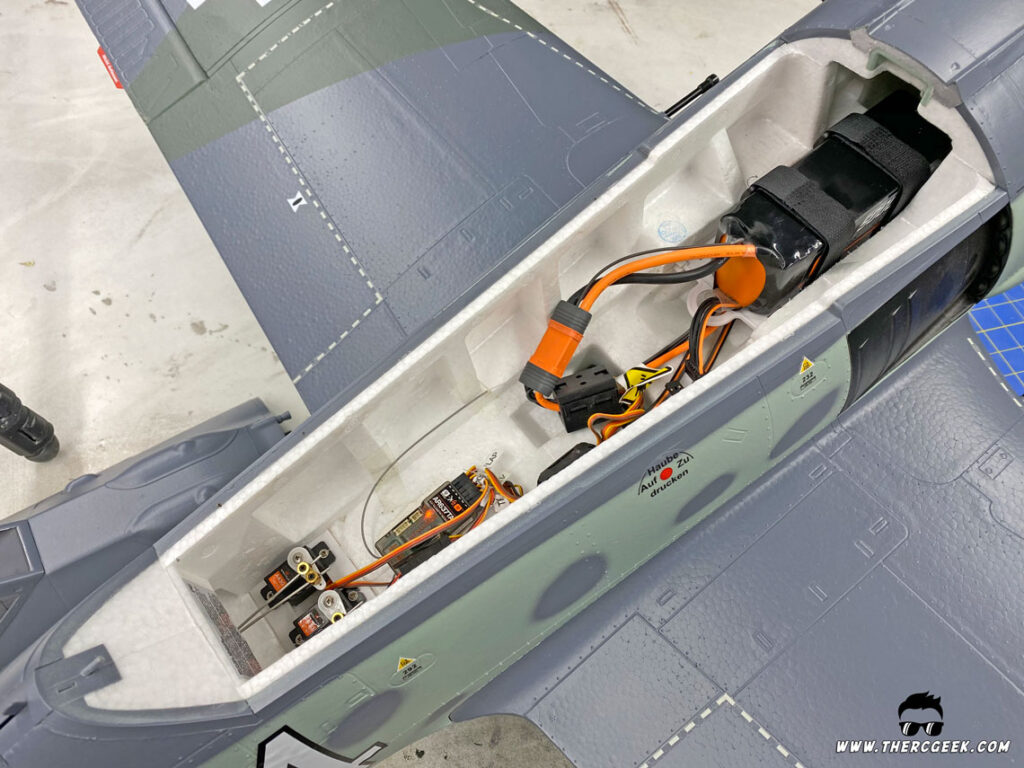 BEING SMART WITH SMART TECHNOLOGY

As noted, the airplane features Smart technology which provides all sorts of telemetry and data monitoring.  I especially like the batteries as they perform well and have protection circuitry that will auto storage discharge the packs (and monitor the health) which is extremely nice.  In setting up the telemetry screens and alarms, it’s good to have some discretion.  On this model, I’m primarily using the defaults actually which have been working well.  I did put together a video discussion with tips for using Smart a while back which is below should you like to know more on how I like to use the technology.

As a whole, the 1.5m sized models present extremely well and the E-flite FW-190A 1.5m is no exception.  Interestingly, based on the airplane scale, I find that the FW-190A tends to appear larger compared to the P-51 even though they are the same wingspan.  I think it’s due to the FW being a slightly larger scale in comparison, so it presents bigger.  In flight, the FW-190A locks in extremely true, maneuvers exceptionally well and is a great overall performer.  The airplane has good speed and scale power for nice fast passes and large verticals and even cruising around primarily at full power, the power system is quite efficient and provides nice 5+ minute flight times.  The model handles any scale maneuvers with ease and really looks good in the process.  Comparing to the P-51 1.5m, I would say that the P-51 does have the edge in terms of speed and vertical performance, but I think I actually like the FW-190 a touch better.  There’s just something about the FW-190A that looks so menacing! 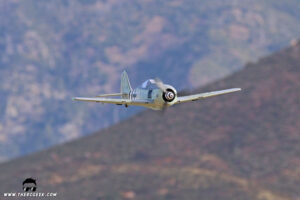 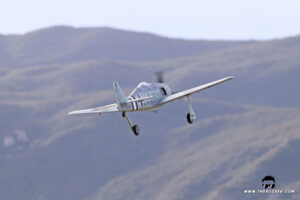 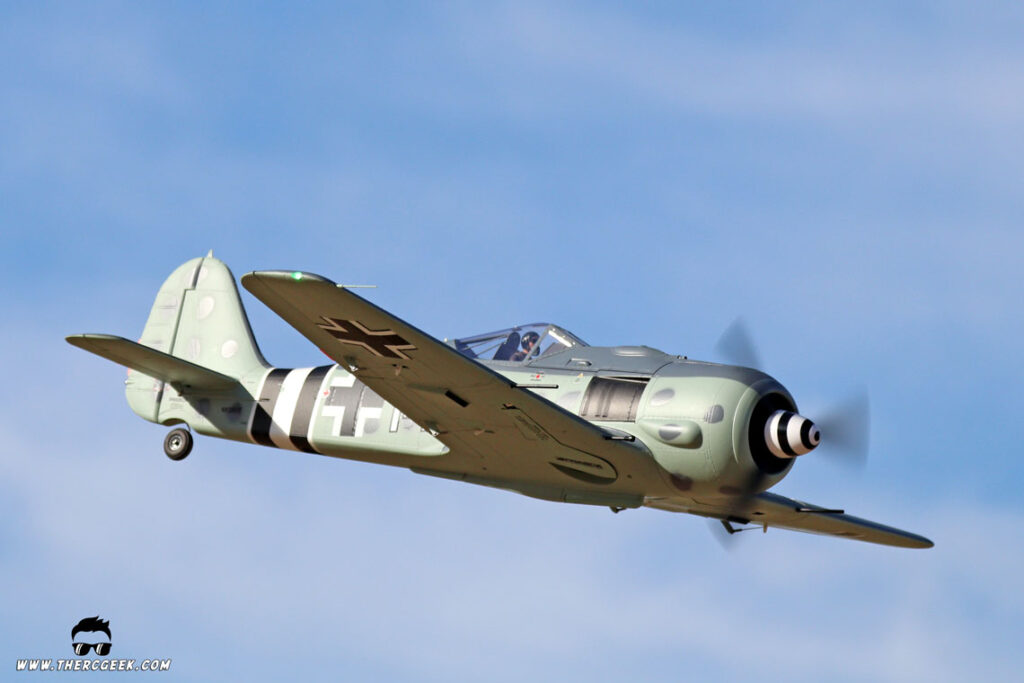 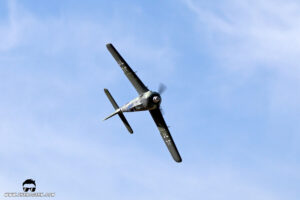 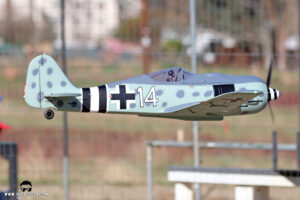 Just like the P-51, there are a couple things to be aware of related to ground handling with the FW-190.  It is a warbird, so it’s important to anticipate the necessity for right rudder on takeoff.  Generally, I’ve found the FW-190 easily manageable on the takeoffs over the multiple surfaces I’ve flow it from (dirt and pavement) reading and reacting to the model as necessary.  The airplane really slows down nicely on the approach, but on the landings, it can be difficult to get a nice smooth touchdown.  Targeting one wheel first on the touchdown is recommended as well as keeping a touch of speed in the flare.  Slowing the airplane too quickly in the flare is likely to cause some bouncing as the mains will touchdown first followed by the tail which will then bounce the mains back into the air.  Additionally, as mentioned, softer tires do help and there’s an option available from E-flite there.  Be sure that both wheels spin nice and free to avoid the model pulling hard one way or the other and on the landing rollout, try to keep it as straight as possible.  Don’t be surprised to touch a wingtip or two on the landing with that narrow gear track though! 😉

Well, there we have the E-Flite FW-190A 1.5m with SMART technology.  E-flite has really put together a wonderful model here that assembles easily, fits together extremely well and flies awesome!  I love the scale details as well and they really help the model the shine at the field as it’s really impressive looking. Now, where’s my primer and paint?  I think it’s time for a quick repaint! 😉  Until next time, I’ll see you at the field!