How hot is Heinemann’s Hot Rod?

I keep telling myself to scale back on the foam airplanes, but when the Freewing A-4 Skyhawk came up on pre-sale, I knew I had to have one!  The A-4 is a classic design that I’ve always appreciated.  In fact, I still remember seeing the Blue Angels fly A-4s back in the 80’s.  It was such an agile yet graceful airplane to watch fly, they will probably always be my favorite Blue Angel aircraft.  The F-18s have brute force, but it just doesn’t have the grace and maneuverability that the A-4 did.

If you follow this page on Facebook or Instagram, then you know how this one ends for me.  For those who and for full disclosure up front, this airplane flies really well when setup right, but I actually crashed the airplane twice in the process of making this review…mostly a result of my own error.  The first time was due to installing an already flown battery into the airplane.  It only took a couple laps before the fan quit and of course it was too low to get back to the runway.  Bummed, but not to be defeated the airplane was refinished with a few upgrades (which we’ll talk about).  It came out beautiful, I loved it!  Unfortunately, the CG moved further back than I anticipated and the airplane over rotated on the second takeoff and I didn’t have enough altitude to fully recover.  It’s fixable, though I’ve debated just buying a replacement instead…it’s currently hanging in my shop waiting in limbo.

With that being said, I still wanted to provide this review because as I mentioned, the airplane flies really well.  But, it’s an A-4 and there definitely some things to be aware of when setting it up for best success. 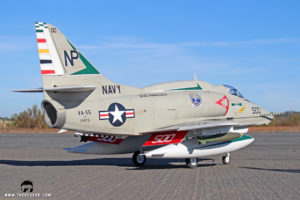 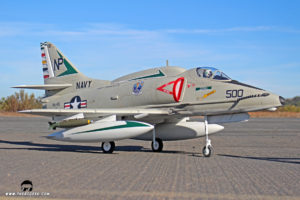 The A-4 is a quick assembly requiring the aft fuselage section be glued on and then the dorsal, horizontal tails and wings bolted onto the airframe.  From there, it’s just a matter END_OF_DOCUMENT_TOKEN_TO_BE_REPLACED

Well, it’s been a little while since my tease at kit bashing a Freewing Mirage into an IAI Kfir (“Kfir” is Hebrew for “Lion Cub”).  We started with an assembly & flight review for the Freewing Mirage 2000 which out of the box flies awesome.  However, the Kfir is such an awesome looking airplane and with canards and a little extra wing area we’ll add in the bashing process, I can only imagine that the airplane will fly even better!  So, in this article, we’re covering the transformation process of turning this airplane into a Kfir and we’re using 3D printed parts as a part of that as well as employing some traditional building methods.  Through this whole process we will be employing the foam refinishing method I covered in our How to Refinish a Foam Warbird series.  I don’t plan to get into much detail about the foam prep work itself in this series as I want to focus on the kit bashing aspect to compliment the refinishing we did previously and use the next couple articles to go into more detail on painting, simple panel lines and weathering.

Now, one of the reasons that it’s been a little while is, in addition to of course a few distractions, is that I’ve been working out the 3D printed parts with a friend of mine.  CAD modeling takes time and there were a number of parts that we ended up making.  These include printing a new nose, the exhaust shroud and turkey feathers, the dorsal inlet, external wing tanks, lower ventral tank, and the afterburner cooling scoops and inlets on the fuselage.  As a whole, we printed a total of 23 individual pieces for the conversion (many of the parts required multiple pieces to be printed). 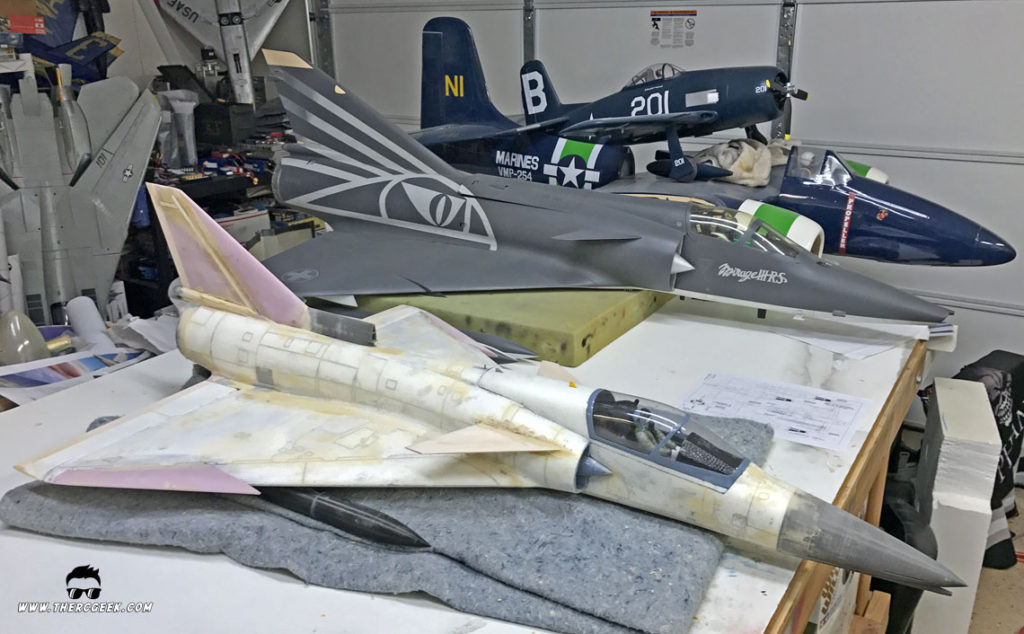 END_OF_DOCUMENT_TOKEN_TO_BE_REPLACED

The Tale of Two Exhausts…

A while back, my Friend Brian had a minor incident with his 1/4 scale TBM P-40.  Though, it didn’t result in any physical damage to the airplane, it did result in an impact to the “stand way off scale” exhausts on one side.  Being made of thin plastic, they ended up crushed and unsalvageable.  We originally thought we’d make a quick plug and do some resin castings, but as we looked at the exhausts more, we realized just how out of scale they really were and how much they just didn’t look right at all.  So, enter the 3D printer!  Within a few days, we were able to draw and print some replacements that came out awesome!  Before we begin, if you’ve not read my Q&A on 3D printing, you can read that here to get a better understanding of the process and materials.  Also, if you’d like to see video of this P-40 in action I’ve embedded the video from my YouTube channel at the bottom of this article.  Don’t forget, if you are looking for help with some 3D printing, I can help!  Just shoot me an email through my contact form.

First things first, we had to make a CAD model of the exhausts.  In looking at the original plastic exhausts, they were completely out of scale.  We used the basic dimensions as a starting point, but then END_OF_DOCUMENT_TOKEN_TO_BE_REPLACED

Last time we finished up construction of our rudder/dorsal assemblies and built our offset rudder hinge.  So, now it’s time to clean these assemblies all up and make them as ready as they can be to be installed onto the fuselage.  The installation of the dorsal onto the fuselage will occur once all of the construction of the fuse is finished however.  The primary reason for this is so that all work on the fuselage can be done without the dorsal being in the way as the fuselage is rotated around while it’s worked on.

Primer – Sand…repeat, repeat, repeat…
With the dorsal and rudders being glassed (see Part 5 for that discussion), the first item of business is to start the END_OF_DOCUMENT_TOKEN_TO_BE_REPLACED

3D printing is something that I have been playing with for some time and in one word, it is awesome!  Though as a technology, it has been around for a really long time, only within the last few years has it become an accessible tech for most folks.  The reason being that the prices of machines have come down dramatically allowing folks access to something that was otherwise cost prohibitive.  Also, there are commercial companies now that focus on 3D printing for non-industrial folks like us, plus one can now own a 3D printer for under $1000.    So, this is an exciting time as this awesome technology grows in popularity and becomes better and better!

Comparison of the 3D Printed turkey feathers on my JHH Mirage IIIRS to the full size.

As we are going through the Skyray build, 3D printing is something I’m using quite a bit for detailing.  I first started seriously experimenting with it on my mirage pushing it to the extent of fully printing the exhaust section turkey feathers.  So, with that in mind END_OF_DOCUMENT_TOKEN_TO_BE_REPLACED