In my previous articles, we talked about the refinish process and making a highly detailed cockpit for the Freewing F-14.  Now, it’s time for paint!  I will say, I have a love/hate relationship with painting models.  Most of the time, I love it, but when there are issues that arise, that’s when I hate it, haha!  However, being patient, having the right materials and ensuring the proper preparation is done can usually keep those issues to a minimum, but sometimes you just have to improvise.  In this case, the vinyl markings I had made decided to curl up and not want to stick to the airframe which had me thinking all of the markings would need to be completely replaced.  As it turned out, at the suggestion of a friend, a little low temp heat with an iron cured the issue (saving huge time and aggravation) and all was right with the world again!

In painting a model, one must first choose a paint scheme of course and this not something I take lightly. :p  I knew that I wanted to do something different and rarely modeled and that I also wanted to do a later low viz Navy scheme because it would be fun to weather (they got crazy dirty).  In my research, I found a scheme from VF-103 dawning a unique and rare nose art carrying the moniker of “Flir Cat.”  As it turned out, this aircraft was used in 1995 to prove out the LANTIRN pod integration and was the first to drop bombs from the Tomcat platform which paved the way for the F-14 “BombCat” which proved quite effective.  That’s not to mention too that the aircraft was flown in part by Capt. Dale “Snort” Snodgrass (highest flight time Tomcat pilot ever) as a part of the testing which provided additional appeal.  So, it was decided, Flir Cat she will be!

A quick note regarding the Flir Cat nose art.  While nose art was a regular occurrence on bombers in WWII, it’s since become a rare thing to see, especially on the more modern fighter jets.  The Flir Cat artwork itself was designed and painted by artist PEL during his service in the Navy in the mid 90’s.  He chose the artwork color scheme from each side based off of graffiti color palettes of the day and had to use different colors on each side for the lettering due to having an insufficient quantity of paint for both sides (hence the two different colors of font left to right). 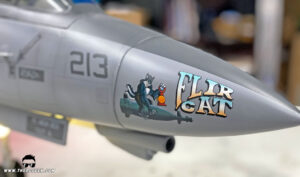 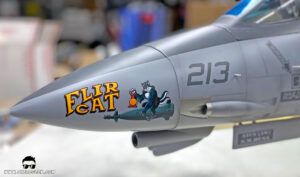 A good paint job starts with a good foundation which is what is done during the refinish and primer process.  Once  the desired smoothness and finish was achieved through the primer/sand/primer process, the model was wet sanded with 600 grit sand paper in END_OF_DOCUMENT_TOKEN_TO_BE_REPLACED 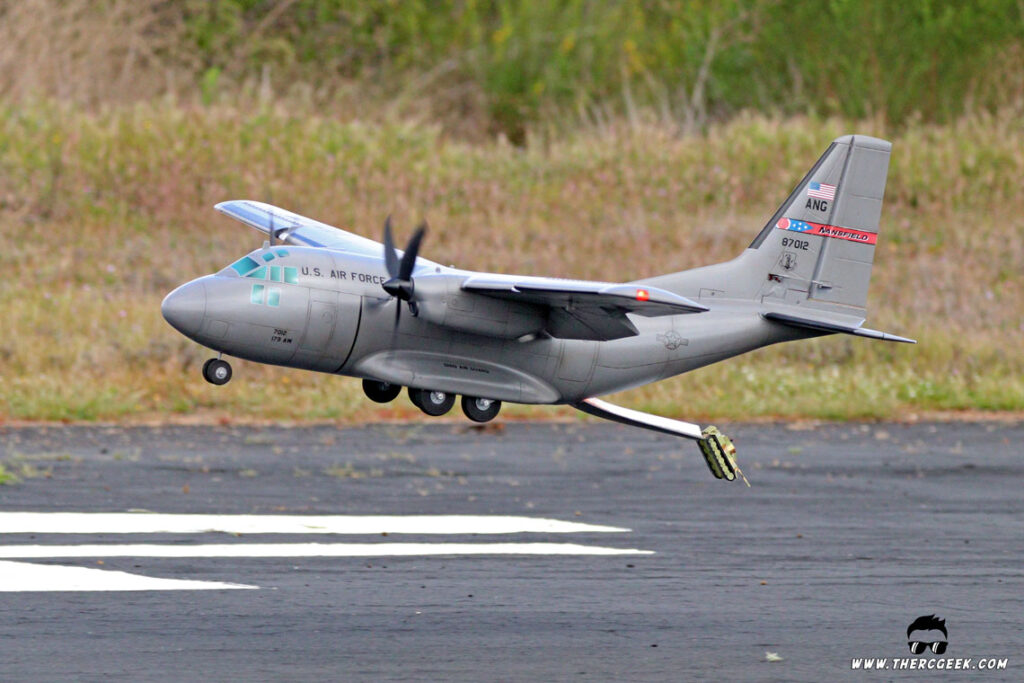 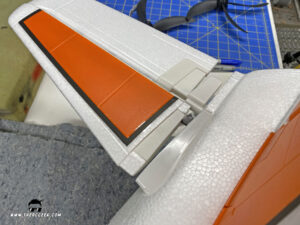 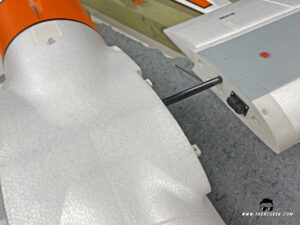 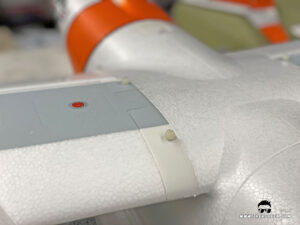 With the airplane together and on the bench, it’s a pretty cool model to behold.  It’s a good size and the cargo bay door is awesome!  I can’t say END_OF_DOCUMENT_TOKEN_TO_BE_REPLACED

Decals, Vinyl and Paint Masks…oh my!

The topic of aircraft markings and making decals was touched on a little bit in my How to Refinish a Foam Warbird series and the request to expand on it a bit has come up a few time since then.  So, here’s a bit more extensive walk through of my process of making and painting markings for my airplanes.

Color and Markings are one thing that I’m very particular about on my scale models.  I’m so particular in fact that I will usually make my own decals and paint masks as opposed to outsourcing.  Ultimately I do this because I actually enjoy the challenge of it (when it’s going well of course) and this gives me full control of the sizes of all of the markings since it usually takes multiple iterations before having everything just the right size.  Also, my preference is to paint whatever markings I can and in the case that the markings may be too small to paint, I will move to waterslide decals.  In some cases, I will even use a combination of paint (or vinyl in the case of my “Lady Alice”) and decals to create a single marking.  Obviously, there are always limitations when doing your own markings and so in the case I just don’t have the capability to make what I need, then it’s time to outsource.

Since I’m a scale fanatic, my goal in making markings is always to recreate markings END_OF_DOCUMENT_TOKEN_TO_BE_REPLACED