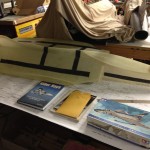 I’m starting this blog with a series titled, “How to Build an RC Jet.”  The subject of the study is a Mark Frankel F4D-1 Skyray kit (I love deltas!) of which I plan to build into a competition ready model for the US Scale Masters (and/or Top Gun if I can ever afford the trip some year).  As I build the kit and document it here, I plan to cover not just basic building techniques (including tutorial videos along the way) but also all of the details that go into a competition model and the tools that are used in the process.  These techniques are extensible to any model aircraft project and so I hope that I can provide anyone out there reading this some basic tools to do something out of the ordinary.

Regarding some specifics on the kit, the design is an exact 1/7 scale which puts the fuselage length at 77.6″ and the wingspan at 57.4″. This kit was first designed around glow ducted fan back in the mid to late 1980’s and flew excellent with that power. According to Mark, he designed it as large as he could while still getting a great flying airplane given the available glow power systems. The design has flown on glow and turbine power, however this will be the first to fly on Electric Ducted Fan (EDF) power and I expect performance to be excellent!  Some of the features I intend to build into the airplane are:

Mark Frankel, I’m fortunate to say, is a friend and has been very gracious since before the start of this project.  He is an extremely talented designer and is very well respected within the industry.  In addition, he is an accomplished aviation author having published TEMCO TT-1 Pinto (Naval Fighters #72) (Consign) and Killer Rays: Story of the Douglas F4D Skyray & F5D Skylancer (Specialty Press), the latter being an absolute necessity for this project! So, with that said, here is the beginning with lots more to come! 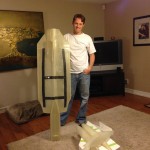 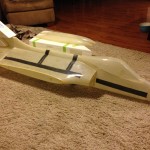 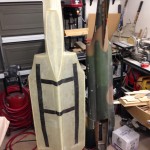 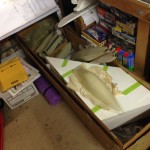 the rest of the bits in the box waiting their turn