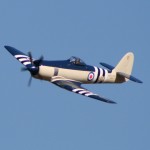 The Hawker Sea Fury is one of my favorite propeller warbirds.  I guess the simple yet elegant lines of it combined with the beastly (and exotic) radial engine and 5-bladed propeller just have a certain appeal to me.  Though it came 2 years too late to support WWII operations, it had a nice stint in Korea; not to mention was one of the fastest single piston engine airplanes ever produced.  So, it’s not surprising then that so many Sea Fury’s have adorned the course at the Reno Air Races. 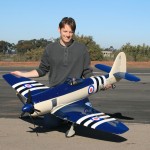 A few years back, Thunder Tiger offered a small line of 1/7 scale RC warbird ARFs that were quite nice.  The lines of the airplanes were good and they flew incredibly well.  The kits included the Sea Fury (military and September Fury racer schemes and the best looking Sea Fury ARF out there for some time) and an F8F Bearcat (military and Rare Bear racer schemes).  I was fortunate to acquire one of the Sea Fury kits when they first came available and of course it had to be electric with a 5-bladed prop!  So, I thought I’d use that to talk a little bit about designing an electric propulsion system for your propeller airplanes.  First off though, here’s a little video of my Sea Fury in action, 5-blade prop and all! 🙂  It sounds just as good in person, no sound system needed!

The power system for the Sea Fury is as follows:

In sizing an electric power system (we’re talking propeller airplanes here as opposed to EDFs), the first question to ask is “what do I want my power system to do for the airplane?”  What I mean is, 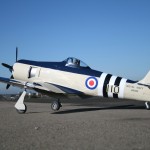 knowing up front if you want pure speed, or a combination of performance and duration, etc.  Also, knowing what kind of prop — will it be a scale multi-bladed (the reason for this article) or a readily available 2 or 3-bladed prop, etc.  There are numerous commercial motors available with recommended props and cell counts.  For a standard 2-blade and 3-blade configuration not much is required other than matching the manufacturer’s specifications with the recommended cell count and you should have a nice flying airplane.  However, for something more out of the box and scale, much more has to be considered.  In the case of the Sea Fury, I knew from the get go that it had to have a 5-bladed propeller.  It’s a Sea Fury, obviously there’s no question here!  So, I had to spend the time to come up with a good combination that was going to fly the airplane well.

In designing the power system, I kept the following 5 rules in mind: 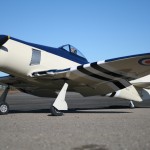 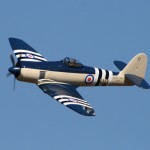 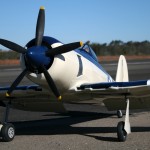 Use an Electric Performance Estimation Tool

The place to start is with a decent electric motor performance estimation tool.  This is the best tool for getting a decent idea of how many amps and watts the system will generate.  You can use a basic one like this — http://brantuas.com/ezcalc/neumotorscalc.aspor you can go to something more advanced like this — http://www.ecalc.ch/motorcalc.php?neumotors&lang=en.  Note that both are specific to NeuMotors, but you can use them as a start by honing in on a good Kv for the system and then you can manually input motor specs to investigate other motors.  In the case of the Sea Fury, I used the basic calculator which provided a decently accurate estimation of the performance of the airplane.  Here’s a screen capture of my results from the program. 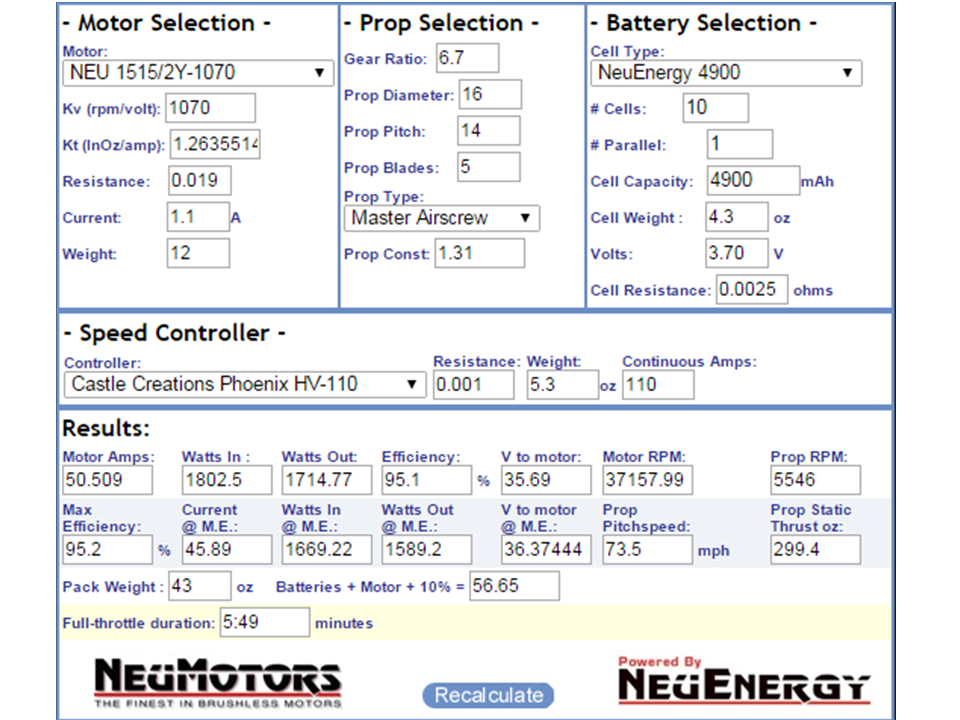 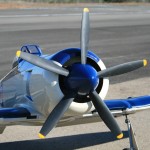 When you’re dealing with higher blade count props (3+), the pitch speed becomes increasingly more important.  More blades means more thrust, but at the loss of efficiency and pitch speed, especially as diameter goes up.  When going from a 2 blade to 3 blade propeller, typically maintaining pitch while dropping down 1″ in diameter will result in similar two blade performance for the 3-blade prop (unfortunately 3-blade prop selection is limited and not always the most scale looking).  However, 4 and 5 blade props are a different story.  For the Sea Fury, I had to keep special attention to the pitch speed.  I wanted a nice performing airplane and knew that 70+ mph in the prediction program would give me that based on some known 2-blade setups that I had flown.  Also, this would give me some margin in the event the program was under predicting the pitch speed.  In order to achieve the 70 mph though, I had to incrementally increase the pitch of the propeller to make up for the losses in efficiency.  Ultimately, I converged on the 16×14 5-blade prop.  This gave good numbers while also centered around a prop that was commercially available from Zinger props (albeit custom order).  A larger diameter would have required more pitch (not to mention a larger hub) which just wasn’t available from Zinger.

Cell Count and Motor Gearing (or not) 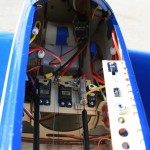 Why 10 cells? — Generally speaking, larger 90 sized glow airplanes should be using 8 cells or more to make the electric conversion worthwhile.  The reason being is that more cells for a given power input means less amps which is good all around.  This also means less heat buildup in the motor from the lower amp draw, happier batteries since they don’t have to work as hard to maintain the current, etc.  I also knew that 5-blades in comparison to a comparable 2-blade setup would be inefficient.  Starting out, 8 cells was resulting in higher current draw than desired, so I bumped up to 10 cells.  I knew the airplane was easily large enough to handle that many cells and I was going to need weight forward to get the required CG.  5000 was a good size capacity that would not be too heavy while also deliver good flight times. 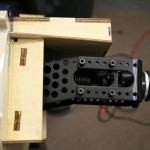 Why a geared motor? — Ultimately, based on the blade count and available Kv’s in-runner to out-runner, the out-runner motors wouldn’t cut it.  It required a significantly low Kv that just wasn’t available to get the desired performance and not end up destroying the motor.  Also, in-runner motors typically run more efficiently than out-runner motors as a whole and with the gearing, the motor was running right in the sweet spot of max efficiency.  Ultimately, if you plan on running a large prop with 4 or more blades, it’s going to require a geared in-runner motor or an exceptionally large out-runner.  There are substantially more out-runners available now at larger sizes than there were when I did this electric conversion.  However, in the end running a large multi-bladed prop, I would still lean towards the geared setup from the get go as that’s just my preference.

Thrust is Going to be High Either Way

When you start dealing with these multi-bladed props, the thrust is going to be high regardless — so don’t use thrust as the only metric for performance.  Static thrust decreases as airspeed increases so, if you don’t have sufficient airspeed being supplied by the propeller, the airplane isn’t going to fly well no matter how much thrust you have.  This also boils down to the purpose, of your electric propulsion system.  A good example is IMAC aerobatic airplanes.  In these cases, it IS about thrust as you have lightly loaded airplanes needing accurate and true vertical lines at constant 50-60 mph speed for all maneuvers.  In this case, you don’t want something that is going to fly the airplane too fast.  However, with a warbird, you are more highly loaded and so need more speed for the airplane to cruise efficiently and fly well. 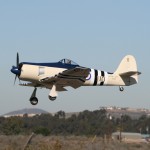 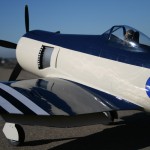 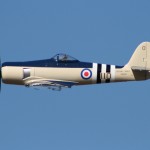 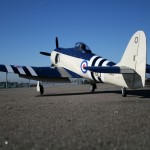 So, next time you’re on the fence about an electric conversion and whether to try that scale prop or not, my hope is you will find these tips helpful.  I am happy to help as well, so please feel free to email me via my contact form or leave comments.  I can tell you the sound and the look are hard to beat, but having a large prop on the front of the airplane can make takeoffs challenging at times.  There is a lot of torque and p-factor involved which requires active control on the rudder (typical for a tail dragger anyhow) while also slowly applying power and keeping active on the elevator to keep the airplane from nosing over.  I do have a ‘secret’ large scale warbird project in the que that I plan to run a scale prop (both diameter and shape) as my flying prop.  Given the size, it’s going to require that I design and manufacture the prop myself, so that’ll certainly be a story to tell…when the time comes of course.

Oh, and since we’re talking Thunder Tiger electric conversions, here’s video of my friend Brent Hecht’s F8F Bearcat.  In this case, his conversion used a large out-runner motor, a 2-blade prop and 8 cells.  It sure would be nice if these airplanes became available again, but I won’t hold my breath given that there’s no longer a US Thunder Tiger distributor.