THE FORCE IS STRONG WITH THIS ONE…

Star Wars Episode 7: The Force Awakens opens next month and I’d be lying if I said I wasn’t excited.  One of the cool things about it is that they’ve taken a more traditional approach on the effects that relies less on CGI.  Keeping in the spirit of this, a new droid was developed for the movie known as BB8.  If you’re unfamiliar with it, it’s a spherical gyro stabilized droid with a floating head on top of its spherical body — I anticipate it will be the new R2D2.  What’s cool is that they physically built a working vehicle of BB8 for the movie which is not only awesome, but is also quite an ingenious engineering accomplishment.

So, enter the Sphero BB8 app enabled droid.  This became available during “Force Friday” along with all of the new Star Wars toys and quickly sold out in the matter of hours.  When I became aware of it, I knew that I wanted one and thought it would be a fun piece of hardware to provide a review of.  Since “Force Friday,” it’s become more readily available and I anticipate that this will probably be one of the must have toys this holiday season.  I’m reluctant to call this one a toy though as the engineering and packaging behind it is excellent.  Also, it’s controlled via a phone/tablet app which adds a lot more sophistication than having a generic plastic controller.  As the Sphero marketing states…”this is the droid you’re looking for.” 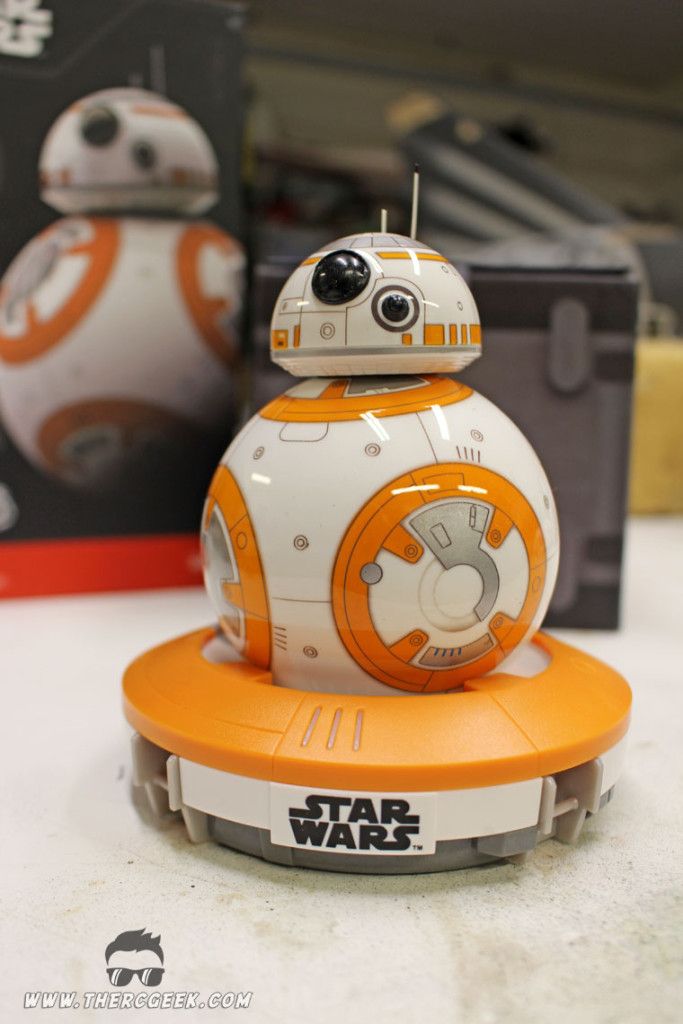 First of all, the retail cost of the Sphero BB8 is $150.  I’ve looked around and that is the street price.  Don’t over pay as folks have been snatching them up and trying to resell them at a profit online based on the popularity of this little droid.  They are available online and in some limited stores.  When they’re in stock, Brookstone online I think is the best place IMO, but you can also get it through amazon (if you have Amazon Prime then you get free 2-day shipping which is always nice).

Upon just receiving the box, you can tell that this is a quality piece of hardware; as the box is beautifully printed and robust.  It is very nicely packaged and in a manner that guarantees the protection of BB-8 in transit.  Opening the box you find BB8 centrally placed waiting for you take ownership along with the charging base, a charge cord and a basic guide.  My one complaint would be that there’s not really any kind of written instructions as the reliance is on the tutorials in the App.  That said, it’s not difficult to figure out. 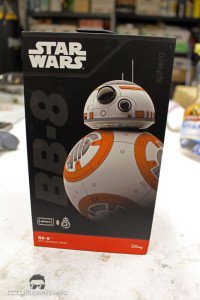 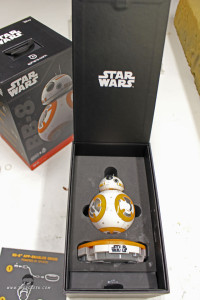 To operate the Sphero BB8, the first necessity is to download the phone/tablet app as all controllability is provided through it.  Starting up the app, you are greeted with the iconic Star Wars fanfare as the app loads.  As it loads, you are prompted to place the device near BB8 to connect it.  It’s at this point BB8 comes alive and begins a routine reminiscent of him becoming aware of his surroundings.

Thumbing through the screens, you are greeted with the following options listed below which are the different modes in which BB8 can be operated.  Though he has some semi-autonomous features which include a “patrol” routine where you can have BB8 “patrol” your house, the most interactive way is to manually drive him (which also has a fun voice command feature).  In that mode, the app screen has a “direction” pad on the right (with great light sabre sound effect) which points the droid in the direction you want and on the left is the control pad where you “drive” the droid around.  Driving him around takes a little getting used to, but note that the optic sensor detail always points in the direction he will go.  The cool thing in seeing BB8 operate is that Sphero has characterized the movements of the droid perfectly! 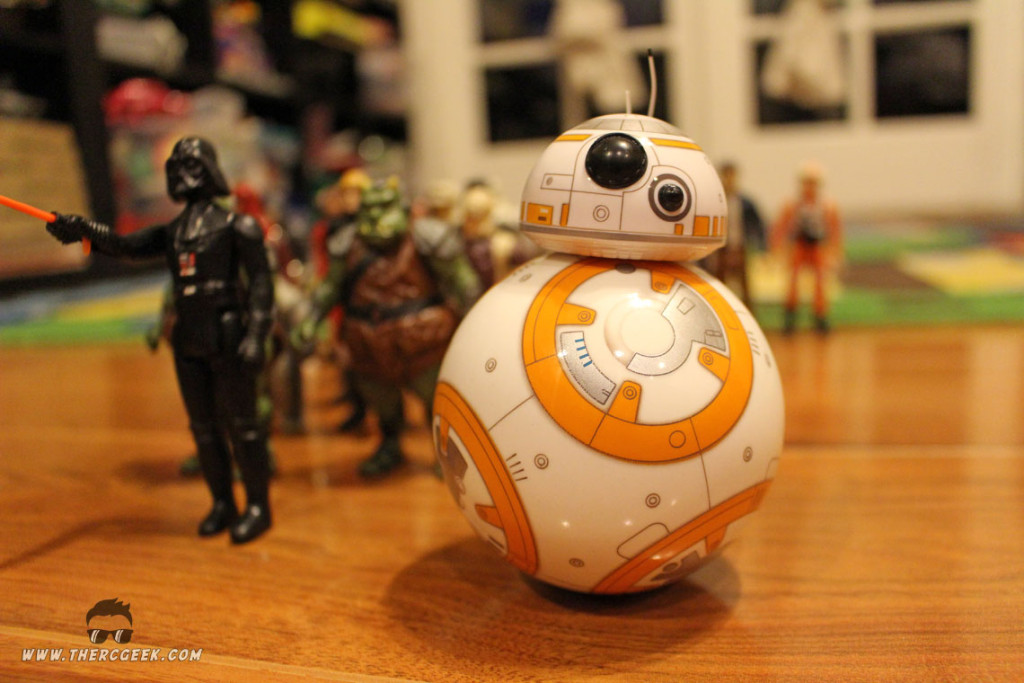 DRIVE – In this mode, you manually drive BB8.  There are two touch pads in this screen; the one on the left is for physically driving BB8 and the one on the right is to calibrate his direction.  When calibrating his direction, there’s a blue light that shines through BB8’s spherical body which indicates his backside.  This all works great as he drives away from you, however, if you don’t recalibrate him when driving back to you, the controls are actually reversed which takes some getting used to.  It’s easy enough to figure out though.

Also available in this mode are voice commands and pre-programmed interactions.  The voice commands are fun and include items such as “go to sleep,” “look around,” etc. but my personal favorite “it’s a trap!” in which BB8 promptly runs away in whatever direction he’s facing.  Maybe there’s a lesson there for Admiral Akbar?  The pre-programmed interactions include BB8 nodding “yes” and “no” as well as some basic autonomous drive patterns you can initiate.  Yes, he is your own personal performing monkey…er, droid… 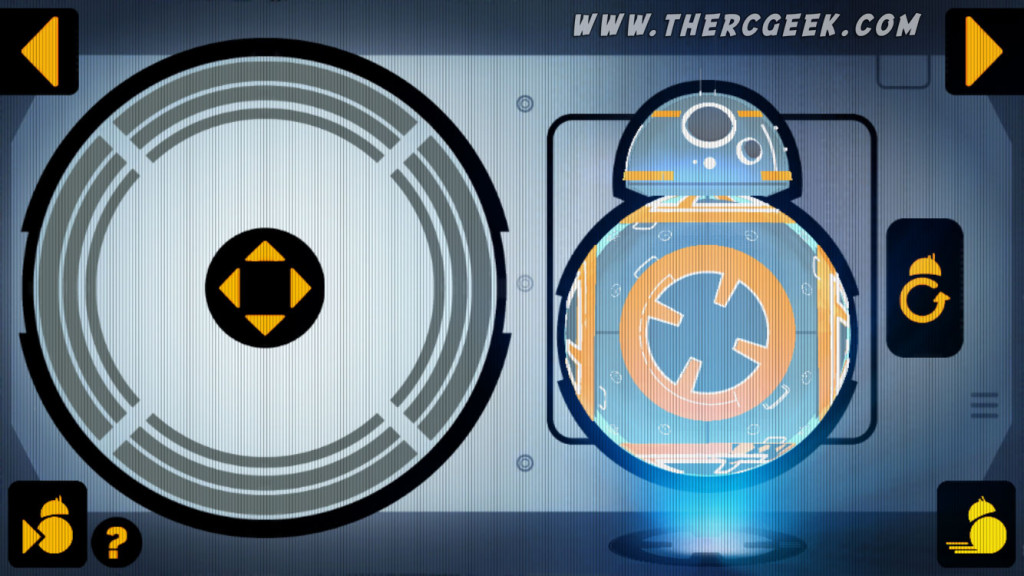 MESSAGE – In this screen, you can project holographic images through BB8 (in the same manner as R2D2).  There are a few pre-recorded messages while you can also record your own.  When activated, you point your device towards BB8 so that you can see him via video.  BB8 lights up white and the holographic image displays on the phone as though it’s projecting from BB8.  It works best when the phone is at a little bit of a distance.  The light is so that the app has a point of reference to project the holograph from, so if you have a shiny wood floor like I do, then in some cases you can pick up false indications that the projections display from depending on the lighting. 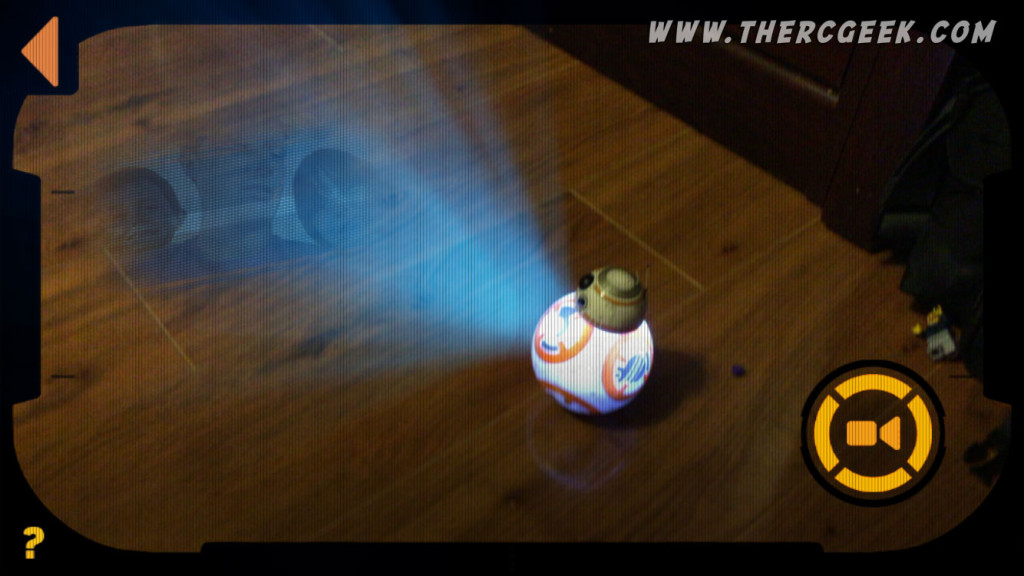 PATROL – This screen allows you to send BB8 out on an autonomous patrol of your house.  He’ll happily patrol as long as he is able.  My kids like to set BB8 on patrol and just see where he goes.  I can’t say that it’s the smartest patrol routine, but it’s fun and gives BB8 some autonomy which you should expect from a droid.  On the screen you have multiple feedbacks available showing BB8s status as well as a tracking map.  Anytime he hits something blocking his way, you’ll see a storm trooper mask pop up on the tracker display.  It’s not the droid they’re looking for… 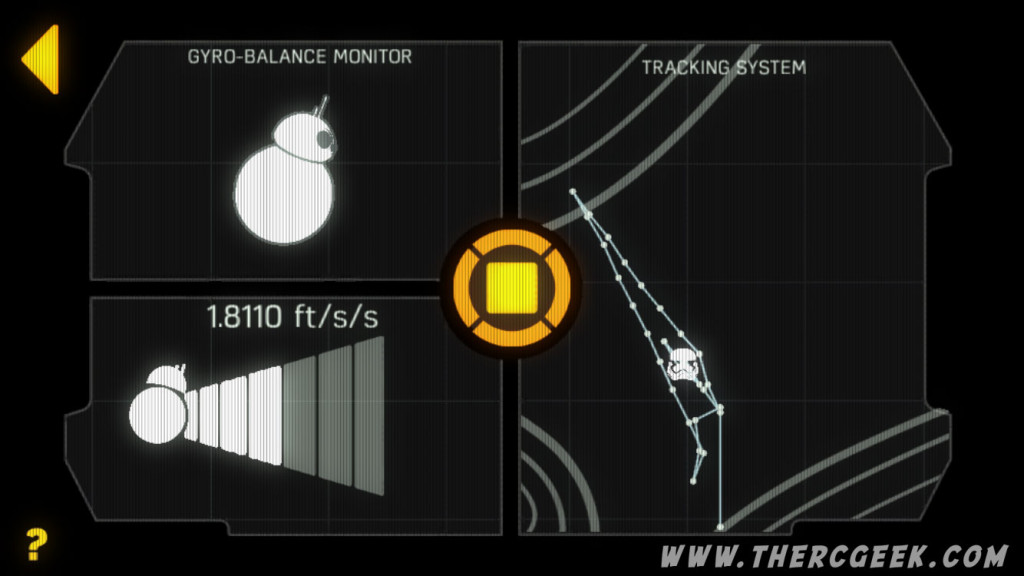 SETTINGS – This is where you can tune the app as well as BB8, nothing too exciting really.  Options include the sensitivity and max speed of BB8 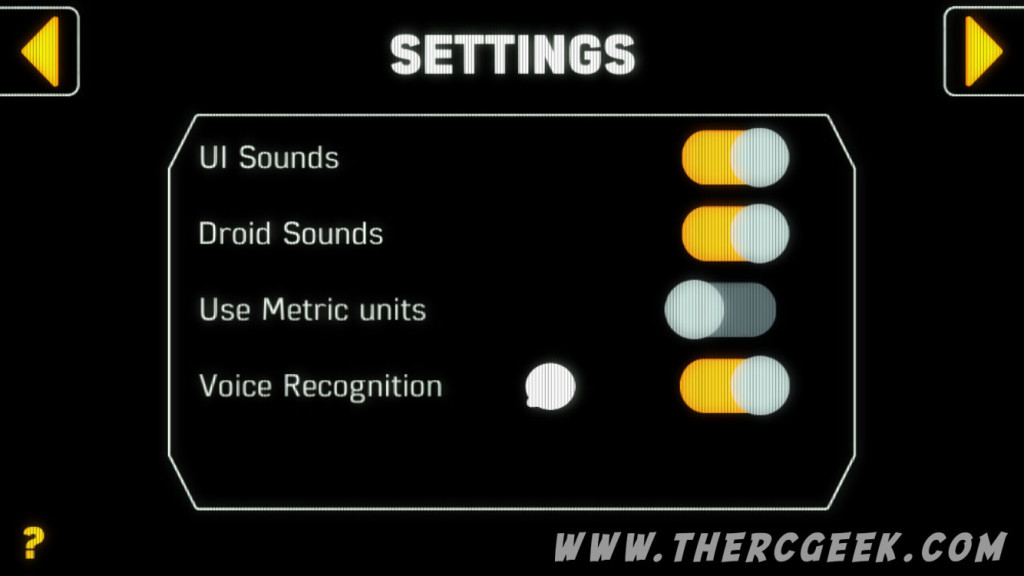 Watching BB8 operate is a blast and they’ve even programmed some personality into him (watch what happens when running him into too many things!) which is a great deal of fun.  Based on the limited videos of the BB8 from the movie trailers, Sphero has captured the movements of this droid perfectly and they’ve really put together a quality piece of Star Wars droidery.  My kids have enjoyed playing with BB8 for hours which says a lot in this day of distractions! 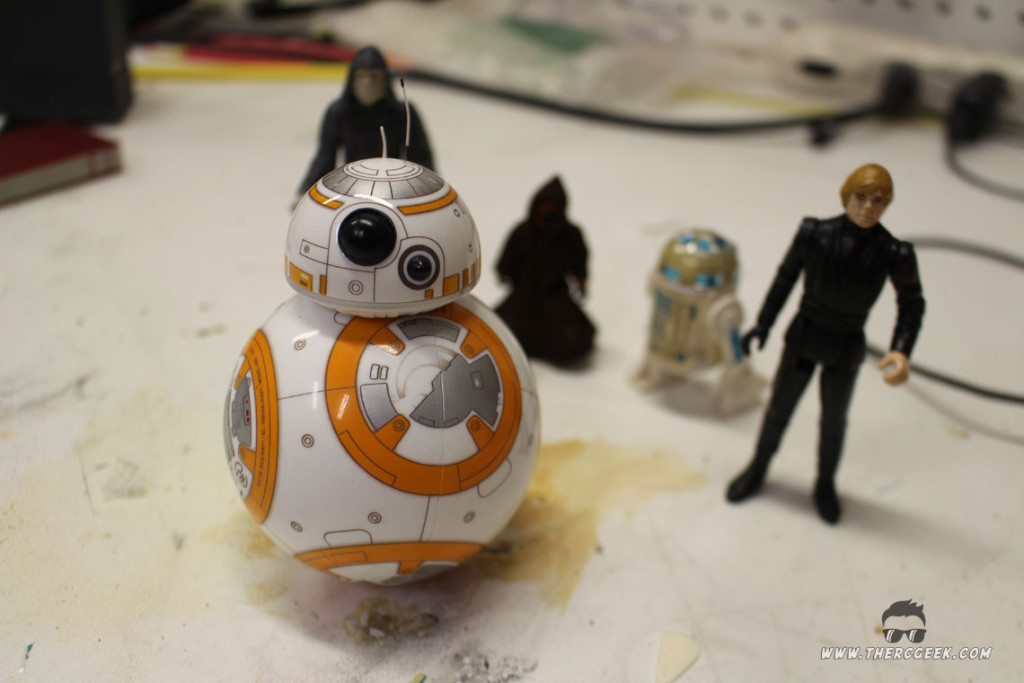 This little droid is quite incredible.  At $150 you are getting a pretty sophisticated little Star Wars droid that entertains like an RC vehicle, but interacts with some personality.  Having the app as the lifeline opens up the possibility for continuous updates and improvements which means that it will only get better.  This droid is heads above any other BB8 vehicles out there and will provide a ton of fun for the Star Wars fan of any age…the force is truly strong with this one…

One thought on “Sphero BB8 Review – A Star Wars Treasure”