Not that long ago, in a garage fairly close by… 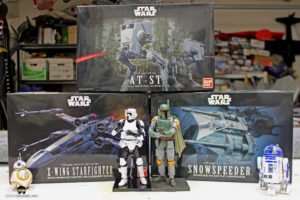 With the advent of “Star Wars: Rogue One” being in theaters for a while and the announcement of the Episode 8 title of “Star Wars: The Last Jedi,” I thought it would be fun to do a little Star Wars build with the kids…and since that meant doing a video, they were all in!  As a plastic model build, Star Wars models are really fun because anything goes and they always look best just dirty and weathered to the hilt.  So, for Christmas, I gave the kids (along with myself ;)) a model from one of the original Star Wars trilogy, a 1/72 scale X-Wing to my daughter, a 1/48 scale Snowspeeder to me, and a 1/48 scale AT-ST  Walker to my son.  We actually started these over Christmas time, but things got a little crazy and so the builds took a little longer than initially planned.  They were scattered, quite literally, across my work bench for a number of weeks!

As far as the kits, they are made by Bandai and they have a whole series of Star Wars kits.  They are of a “press fit” design which means, no glue, but they don’t snap together either, so if you happen to mess something up, you’re able to pull things apart.  However, there remains sufficient friction that everything holds together tightly.  In fact, the engineering behind it is excellent and the fit is pretty killer.  The other thing is, everything is molded in color.  So, there are multiple sprues of different colors and in building the models, the different colored parts fill out the appropriate colors on the model.  They also include stickers and water transfer decals that finish out the rest of the colors, so depending on which way you want to go you can choose either one (I went for decals, my kids went for stickers).  Given all of the different colored sprues, it meant that there were quite a fewsmall parts.  Also, the instructions didn’t follow too logical an order the way it was laid out, so my kids did have a little difficulty with some of that.  But, being that everything pressed together, fixing any mistakes were able to be remedied easily enough.  Lastly, the kits come with an awesome display stand and base, so you can create a nice little action diorama from it.  As a whole, the kits are incredibly detailed, fit together beautifully, and really build into some awesome looking models. 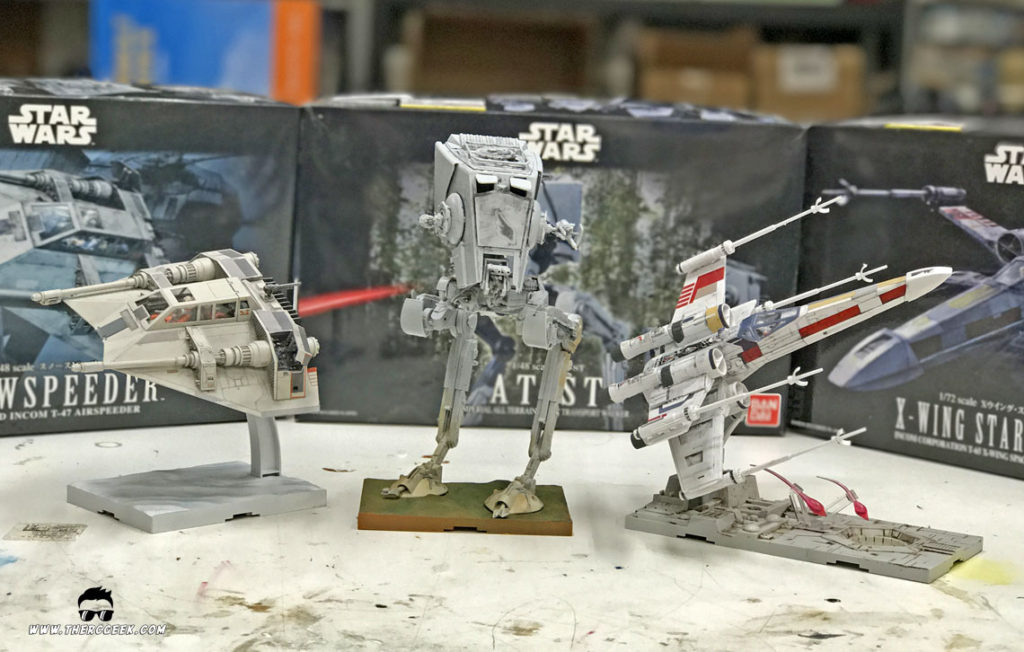 In the process of building, we explored some weathering techniques.  I busted out
my old artists charcoal and showed the kids how to use it to create the effect of dirt and grime on the models.  I rubbed the charcoal on some sandpaper to create dust and then we used a short haired brush to apply it.  We wiped it off as desired and the dust would remain in the details and panel lines.  Once happy with the results, we clear coated the models which is a must.  Also, with the bases that come with it, we explored some airbrushing and acrylic washes which I touch on individually below.  A Star Wars model HAS to be dirty! 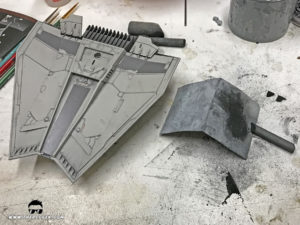 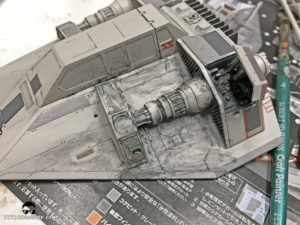 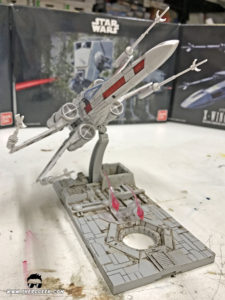 Of the 3 models we put together, this X-Wing actually ended up being the most difficult I’d say.  Many of the parts look similar to each other since you have the 4 similar engine pods on each of the s-foils (that’s Star Wars speak for the wings).  So, if you’re not diligent about cross referencing the part numbers to what’s called out in the instructions, you can mix things up a little bit.  It’s not a big deal though and I only had to help my daughter out a few times to correct some of that.  In finishing the model, she opted to keep it mostly in the molded plastic colors and applied the stickers which look quite good.  She opted for a little detail painting in the cockpit and around the model and from there applied the artists charcoal for some weathering.  There’s so much detail on the model that the charcoal really helps it all to really pop.  The base is indicative of the Death Star trench with the proton torpedoes well on their way into the exhaust port.  There’s no doubt that Death Star is about to blow up!  To bring out the detail on the base, we used an acrylic wash with some FolkArt Raw Umber which we then cleaned off with a paper towel lightly soaked in Tamiya Acrylic Thinner to get the desired effect.  She really liked the effect and it was really easy to do, especially since the base wasn’t painted at all.  So, no worry of any paint rubbing off in the wash process.  The flight pose of the X-wing with the action of the proton torpedoes in flight really gives the model a great presence!  It was definitely the best diorama of the 3 kits! 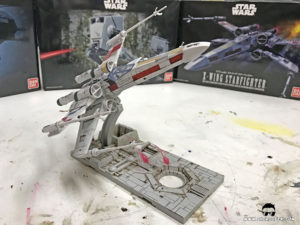 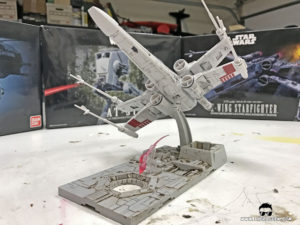 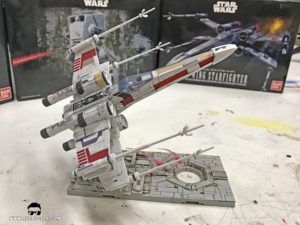 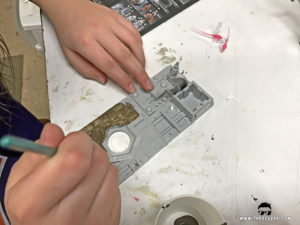 I’ve always had a fascination with the Snowspeeder ever since watching “The Empire Strikes Back” when I was a kid.  There have been a few models that have come out, but seeing some of the other Bandai models my son has put together, I was excited to try out their Snowspeeder.  I was definitely rewarded with a great fitting and easy to assemble model.  I can’t help it, I have to paint everything I build, so I painted the whole thing.  And I probably spent way too much time on the cockpit, but I always do!  I opted for the water slide decals as opposed to the stickers and it took probably a good 2 hours to apply them all.  There are some pretty crazy small decals!  I used Micro Set and Micro Sol (a must anytime applying waterslide decals!) to get them to lay down well and then used artists charcoal and dry brushing for weathering.  The base is representative of the Planet Hoth with a nice snow pack.  I painted it up with some Insignia White and then used some Tamiya Clear Blue to give it a little icy-ness in some of the molded recess.  Definitely not as cool as the X-wing setup, but then again, Hoth was a pretty barren place in the movie.  Now I just need a 1/48 scale AT-AT to create a complete Hoth scene with!  That would be a pretty darn huge model though… 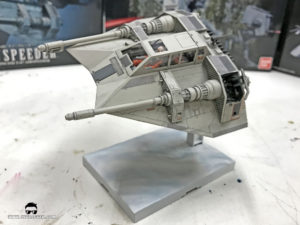 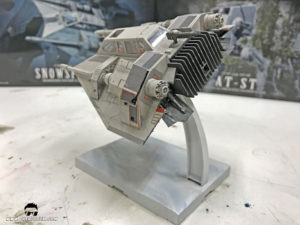 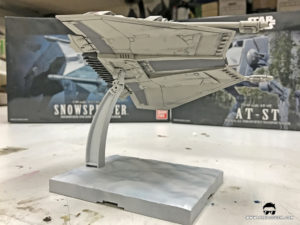 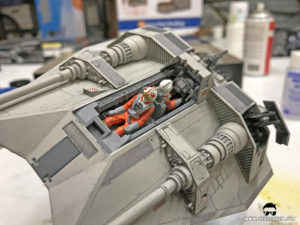 AT-ST (Star Wars Episode VI: The Return of the Jedi) 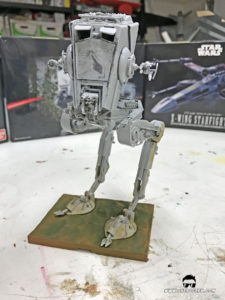 The AT-ST was the next difficult build in the process.  That didn’t stop my son from being the first one finished though!  With the legs, there are a number of different pieces and they all look similar.  So, just like the X-wing, it’s good to take care to cross-reference the parts with the instructions.  I had to do a little forensic engineering to help sort out some parts that got mixed up a little bit.  Again, since it all a press fit, correcting it was no problem whatsoever.  My son opted to keep it all on the molded colors and decided he didn’t need any painting to be done either.  Understandable since the cockpit isn’t really seen at all on the finished model.  He also opted to do some artist charcoal for weathering and really liked the effect of it.  To wrap it up, we did a little airbrushing with some Humbrol Dark Green to the brown forest base and then airbrushed some Humbrol Dark Earth on the feet and legs to give it a dirty look from walking through the Forest Moon of Endor.  Pretty darn cool! 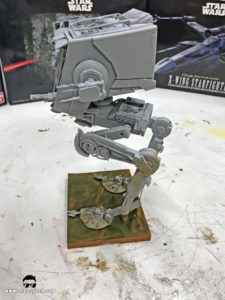 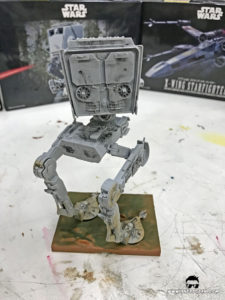 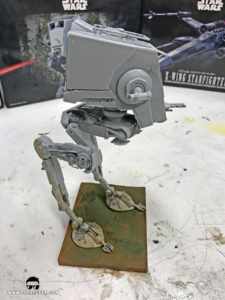 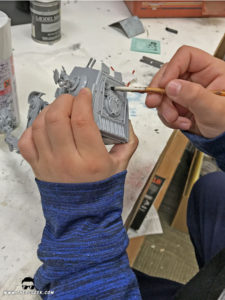