The UMX Warthog that will have you brrrrrt while you fly!

Ever since the UMX A-5A Vigilante scratch build project with my friend Brent, I have been playing with a few UMX aircraft of late.  I have to say that there are some really great and unique UMX airplanes out there and Horizon Hobby has really been leading that charge.  The technology is such that you can create some really neat projects at basically 1/32 to 1/24 scale…essentially plastic model sized!  So, when the E-flite UMX A-10 arrived at my door step, needless to say, I was stoked!  I had been eyeing the airplane for a while, though surprisingly hadn’t seen one fly in person to that point.  I had heard that they fly great and so was excited to give the airplane a try.

The full sized A-10 is arguably one of the most iconic attack aircraft of all time and is just an incredible machine.  Designed for the close air support role, it really succeeds in that mission sporting a 30mm nose cannon and having a considerable stores carriage capability to back it up.   Mention the A-10 and usually someone in the room will crack off with brrrrrrt!  Emulating of course the sound of the 30mm cannon firing (What else would you think that was!? 😉 ).  So to see a twin EDF UMX A-10 realized and on the market is awesome and this cute little A-10 looks the part really well. 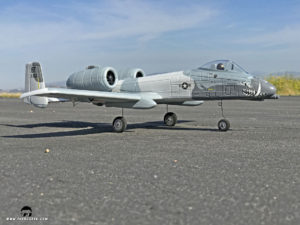 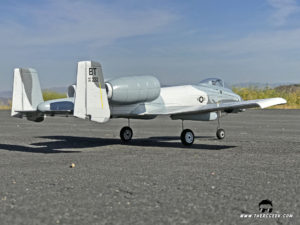 The cool thing with these micros is they come out of the box completely assembled and ready to go.  All that is needed is a flight battery to install and a Spektrum radio (all the E-Flite UMX’s are Bind n’ Fly).  Opening the box and unpacking the airplane, you are met with a wonderful 22″ wingspan rendition of the A-10 Warthog.  The shape looks good and the paint is nicely done.  The camouflage pattern is an interesting choice and looks good on the airframe.  It wasn’t a scheme I was too familiar with and doing some research it’s based on an experimental camouflage that was tried during Desert Storm.  It was named the “flipper” camouflage scheme but apparently was removed from the airplane before it was deployed to the gulf.  From what I could tell though, the real one didn’t have the hog teeth on the nose that this one does.  That can be overlooked, after all it’s a warthog, it has to have teeth! 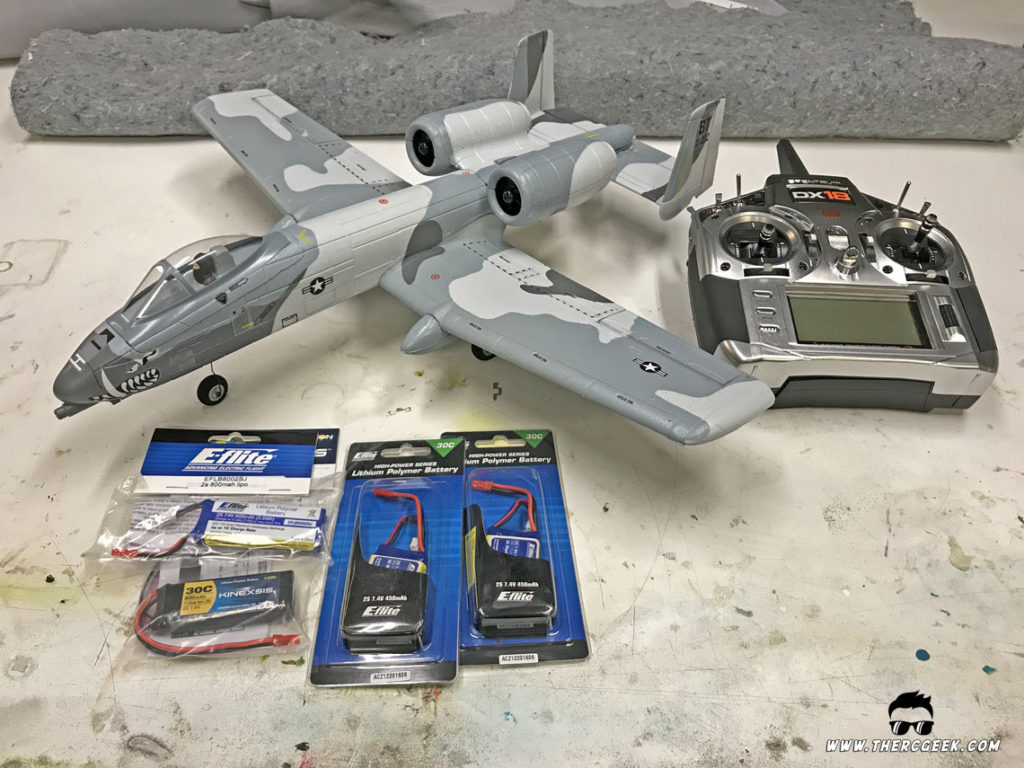 In terms of the fans, the A-10 has a pair of 28mm 5-blade EDFs (the same as what come in the other UMX jets that Horizon offers).  They’re about the diameter of a nickel and put out a good amount of power, pushing the airplane around very well.  They’re not the most pleasant sounding, but they do work well.  All of the UMX’s have a fully integrated receiver and gyro system, so you’ve got AS3X which helps the airplane handle atmospherics.  The airplane has fixed removable landing gear out of the box, so if you’re a pavement ops guy like me, then you have the option to use the gear and avoid scraping up the bottom of the airplane.  Obviously in the air, it looks way cooler without the chicken legs hanging down, so hand launching is a good option if you’re flying off of grass. 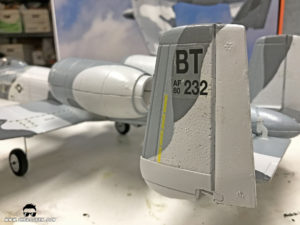 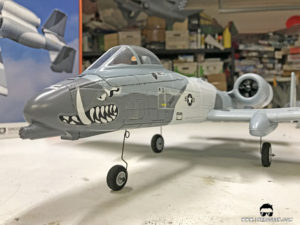 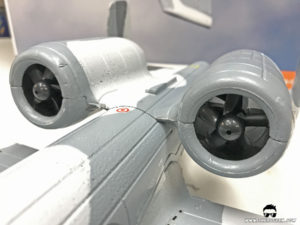 One thing to note about the gear is that the nose gear is pretty soft.  So, if you get a side load on the strut or land hard, the strut will flex and/or bend.  Also, at 100% servo travel, the steering is very sensitive which compounds the issue.  Just some things to be aware of.  Reducing the steering throw helps, but ultimately it needs to be stiffened up to get rid of the issue. 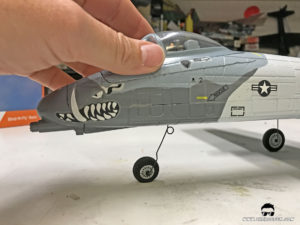 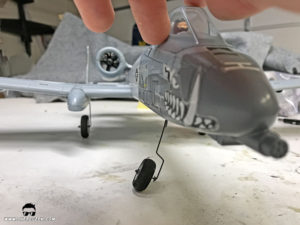 The radio setup quite literally took about 10 minutes.  The instruction manual recommends setting up the dual rates at 100% end points (high rates) and  70% end points (low rates).  I found through flying the airplane that the 100% rates felt the best.  Also, they recommend 10% or so expo all around on that too which felt good in the air.  It is important to note that the instructions advise not to change the end points to greater than 100%, or you run the risk of burning up the servos.  So, 100% is the max throw you can get and quite frankly, those rates felt quite good to me in the air.  Also, if you find yourself adjusting the centering trim significantly, use a pair of needle nose plyers and adjust the bend in the pushrod.

With regards to the CG, it is also set per the manual which states 34-36mm as measured from the wing leading edge root aft.  I’m using a 2 cell 800 mah pack which is placed about mid to aft in the nose hatch area.  The 800 pack offers flight times well over 5 minutes, so should one want to run a smaller pack that is a possibility.  That said, the airplane handles an 800 pack without any problems.  It’s worth pointing out to be careful pulling the batteries off of the velcro in the fuselage as the fuselage flexes quite a bit.  It’s just something to be aware of to avoid creasing, or even worse breaking, the foam when removing the battery. 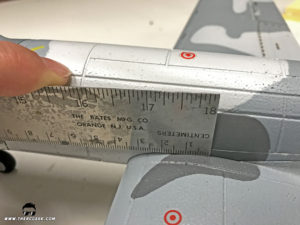 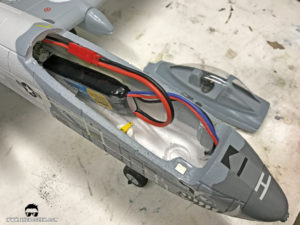 FLYING THE UMX A-10 WARTHOG

Considering how small the fans are in this A-10, the airplane has excellent power.  It’s quick yet easy to fly and has good controllability using the 100% end point travel.  I was really surprised by the vertical performance as the airplane will climb quite well even directly from takeoff.  It’s agile and so will handle any scale aerobatics you want to throw at it.    It handles winds decently having the AS3X, but it of course still does get bumped around a bit if it’s turbulent.  The airplane looks good in the air but for that extra cool factor, then definitely remove the landing gear.  Just make sure you have a nice soft spot to land.  The airplane is very light weight which also means there’s some fragility to it.

Regarding the fans, they work “fan”tastic…seriously, they work very well…but they are kind of loud and high pitched at full throttle.  Kind of like a swarm of mosquitoes.  It’s not a surprise since the fans are extremely small and are spinning at a very high RPM at full throttle.  Due to those two things alone, the sound is going to be high pitched.  Also, at full throttle, the fans are a little out of synch so there’s a very definitive beat oscillation which exacerbates the sound as well.  I think with a little balancing on the rotors that should help smooth it all out and get the fans more in synch and a little more pleasant sounding in the air.  This can be done with a very small amount of tape on the spinner that you move around radially until things clean up a bit 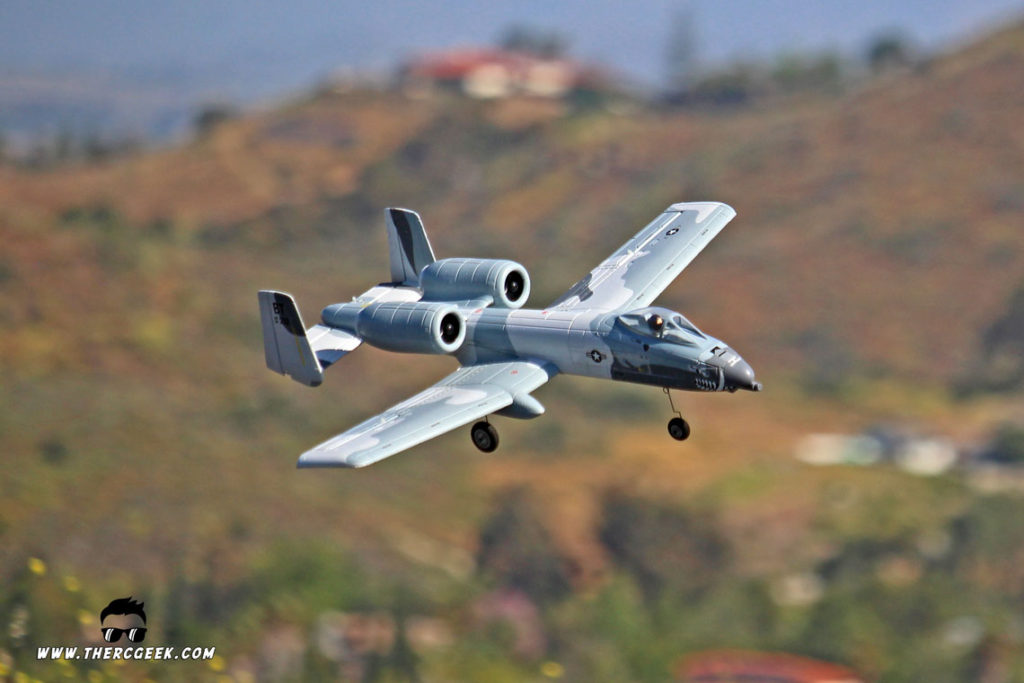 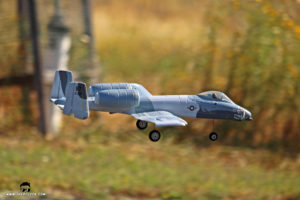 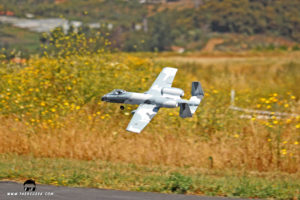 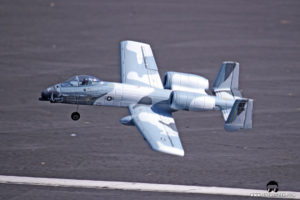 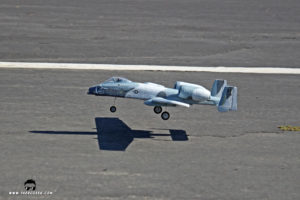 These umx airplanes are really a lot of fun and the E-Flite UMX A-10 is a great addition to the fleet.  The airplane flies easily but maintains the speed and maneuverability you want for aerobatic flying.  Take it to the park and you’ll be the stud of the neighborhood!  Plus, it all sits in the box which is great for protecting the airplane during transport and storage.  It is worth mentioning that there is a certain fragility to the airframe, but that’s necessary for these UMX aircraft to be light so they fly well.  Now, if we could just get some UMX retracts!