Bang zoom…right to the moon!

Happy New Year everyone!  I never thought I’d end up writing about a Lego build, but when I saw the Lego Saturn V rocket kit in my kids’ Lego catalog, I knew that I had to have one.  So, I thought it would be fun to do a little video and article in the process.  That’s not to mention an afternoon spent building Legos with my son; talk about like the perfect day!  This kit seems to sell out rather quickly, and I actually had a couple failed attempts to locate one.  However, I was lucky enough to find one just in time for Christmas (it was a Christmas miracle! 😉 )!  Lego really does some incredible models these days and my son (the Lego expert in the family) is all about it.  Lego didn’t have the licensing deals when I was a kid that they do now and the models that they create these days as a result are just awesome.  If you’ve not seen their special edition Millennium Falcon kit, it is their largest and most expensive set ever and it is amazing!

Being an aerospace engineer, I’ve always had a fascination with the Saturn V.  It still is the largest and heaviest rocket that has ever been launched into space and it was done in a time where the first computers were only just starting.  I remember building an Estes Saturn V kit with a family friend when I was a kid.  It used a single D sized motor and had so much mass behind it, it launched much like the real thing off the launch pad. 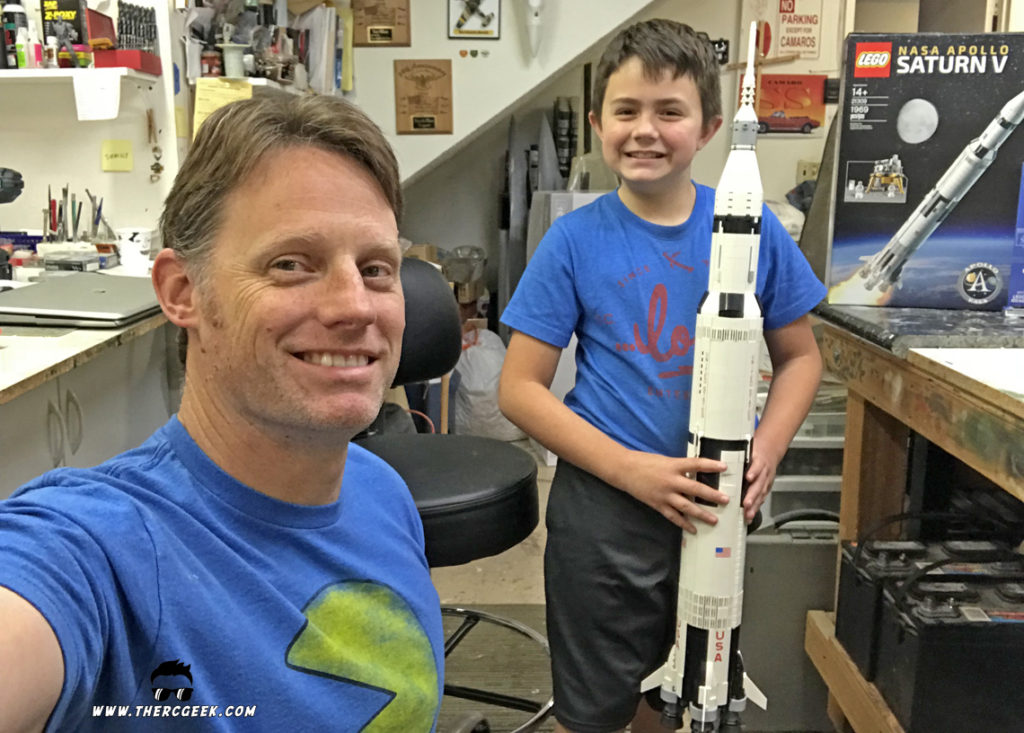 The Lego Saturn V kit itself comes in a big box (labeled for ages 14+…I barely made it!) that has some really nice art on it.  It displays on the back all of the different modules and stages that the kit (and full sized rocket) separate into…inspiring of course our inner astronaut!  There are a total of 1969 pieces noted which is just a little too perfect…(the year of the Apollo 11 moon landing in case you were wondering…) 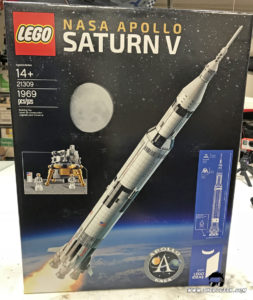 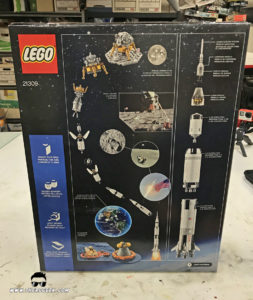 The box content includes a total of 12 bags of Legos along with a nicely done instruction book which includes a write-up about the Saturn V and the Apollo space program (in just about any language you choose).  My son and I were excited to get into building the kit, so with the box emptied and the bags inspected, it was time to get started! 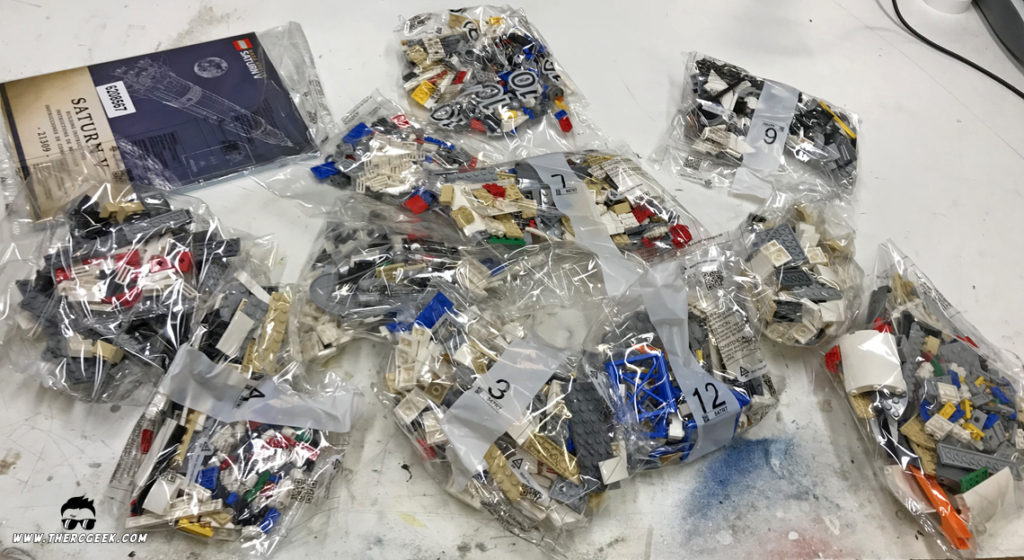 3 HOURS OF BUILDING FUN WITH MY SON

My son and I split up the build such that I built the main stage and he took on the rest.  It worked out well as that evenly split up the bags 6 and 6 between us.  However, in less time than it took me to assemble the single main stage of the rocket (that he actually started), my son assembled the secondary stage, the lunar module, the crew module and everything else.  I choose to think that it was because I was taking my time and enjoying the experience… 😉  Full assembly was completed in about 3 hours or so total with the 2 of us working together.  Lego’s instructions are always really good, but it is still easy to accidentally skip a step or miss a piece.  I continuously remind my son that it’s not a race to the finish on these builds.  Yet somehow, I was the one who ended up making a couple mistakes…doh! 😉 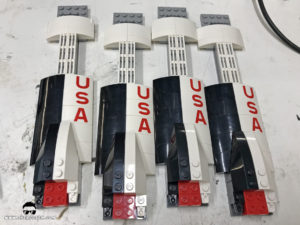 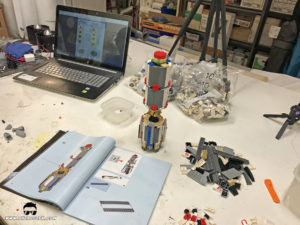 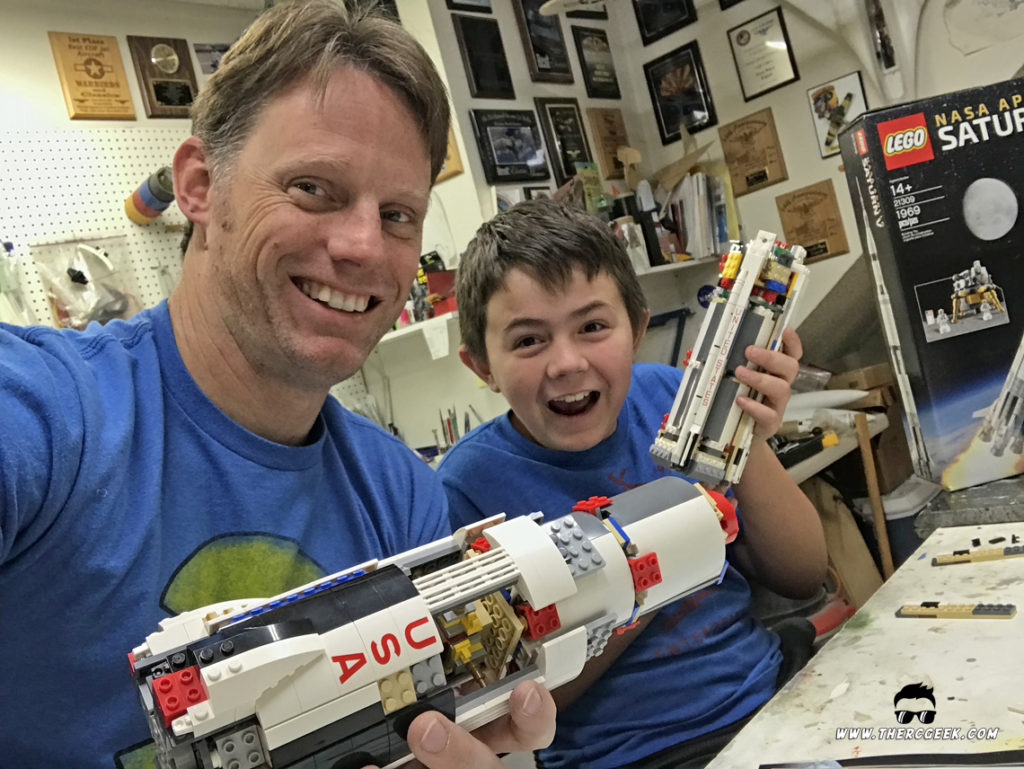 The completed Lego Saturn V rocket is absolutely awesome!  It comes in close to 40″ long fully assembled which makes the scale of the model about 1/109 scale (just a touch smaller than the 1/100 scale Estes).  The rocket breaks down into each of the individual stages of the full sized rocket which is a really nice touch and also includes the return capsule and lunar lander with to scale micro-figure astronauts.  My son could not believe that the micro-figures were to scale to the rocket.  He figured that they had to be way too small! 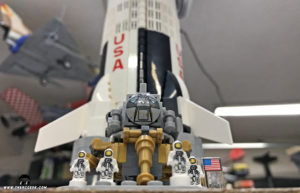 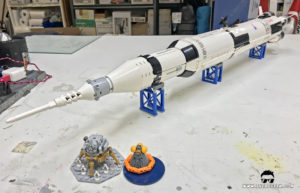 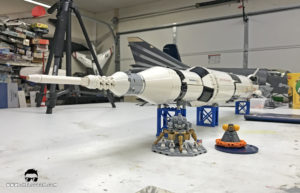 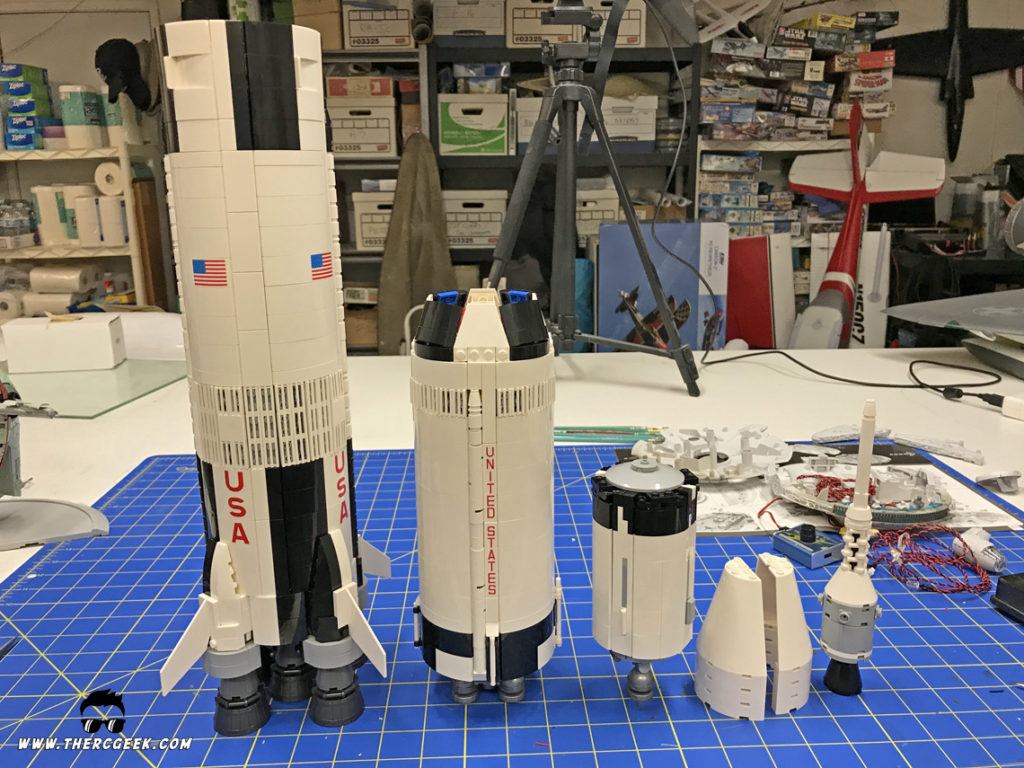 Needless to say, this Lego Saturn V kit is absolutely awesome!  Displaying it is a bit difficult based on the size, but it fits perfectly on my desk at work. 😉  One thing to note is if you’re looking for the kit, I recommend getting it directly from Lego (this Amazon link is good place too) as otherwise you run the risk of paying higher than retail price for it through third party sources.

I have to say, these kind of diversions are really fun and I find that they actually help get me re-motivated on the big RC stuff.  We all need breaks from time to time and I find that breaks like this help me come back to the big stuff more excited and invigorated.  Of late, I’ve been playing a bit with some Star Wars plastic models.  Plastic modeling is where I started and it’s something that my son likes to do with me.  Not to mention that I cherish the little bit of time we share in the shop.  Now if I could just get him flying! 😉  I started at 11 and he’ll be 11 soon, so maybe something will spark in him like it did me.  I do have a balsa build planned with him, so we will see what 2018 brings!