Fly Boldly and be SAFE!

As I mentioned in my E-Flite P-47 Razorback and Cessna 150 reviews, I’ve been wanting to provide a separate discussion on Horizon Hobbies’ SAFE Select technology that’s featured with their bind and fly aircraft.  The P-47 and Cessna are both great next step type airplanes for those that may still be learning and so the technology is there to help folks learning to fly and hopefully protect them from getting into trouble.  I found that there wasn’t a whole lot of documentation about SAFE Select out there, so I thought that it would be worthwhile to talk a little bit about it and give some tips for using it effectively.  As we get started, note that this is a technology that’s part of Horizon’s Spektrum bind and fly setups, so if you’re using your own receiver and radio in the Horizon airplanes, then obviously, this wouldn’t apply.

WHAT IS “SAFE” AND HOW DOES IT WORK?

First of all, what is SAFE?  What is it all about?  SAFE is a feature that can be turned on that, when flying your aircraft, is intended to keep pilots from getting the airplane into an attitude that could spell trouble.  There are multiple levels of the technology which includes SAFE Select which is what is in the Bind and Fly P-47 and Cessna that basically pitch and roll limits the airplane to keep the aircraft from going inverted but still maintains a good level of controllability.  It’s intended to assist intermediate flyers, so it doesn’t auto coordinate the airplane in a turn per say like some of the other versions.  That’s where the SAFE and SAFE+ technologies come in which are intended more for those who are learning.  These have beginner modes which auto coordinate turns, intermediate which is similar to SAFE Select, and advanced which essentially turns it all off.  SAFE+ simply means the same as SAFE, but with the addition of GPS functionality.  In all cases, when SAFE is on, there’s a pitch command that is tied to the throttle position.  So when flying when the throttle command is in the lower 1/3 range, a slight descent is commanded, the middle 1/3 will fly straight and level, or the top 1/3 will command a slight climb. 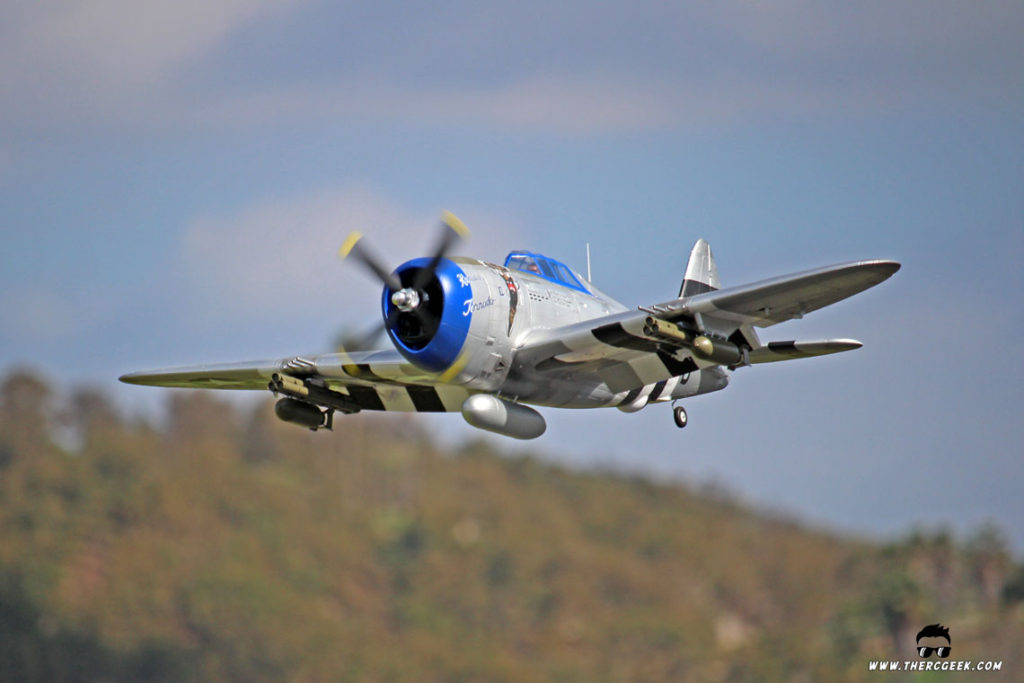 One thing that I do want to say up front is that SAFE is a fantastic tool which really makes getting into RC more accessible for sure, but it should not be viewed as a replacement for some good old fashioned flight training.  Since the technology pitch and roll limits the airplane and with some versions auto coordinates turns for you, in many cases you won’t get the same feel of the airplane as you would when flying without SAFE.  The key in flying well is providing minimal inputs to the control sticks and that comes with practice.  You will fly the way you train, so it’s important early on to develop good habits because you’re building muscle memory and feel as you practice.  As an example, with beginner mode on, most of the time you’ll end up moving the stick the full limit of stick travel to get the airplane to do what you want it to and that’s not something you want to get used to.  For typical flying, it’s about small movements and rarely do we want to command full stick throw unless we’re looking for some high rate aerobatics. The Select technology is much better in that depending on your max control surface throws, you’re less likely to hit the limits on the stick travel and so you have a more accurate feel to the aircraft.  Even so, you still wind up hitting the max stick travel since you’ll get to a point that once the aircraft limits you, additional control input on the transmitter won’t provide any additional control input to the airplane. 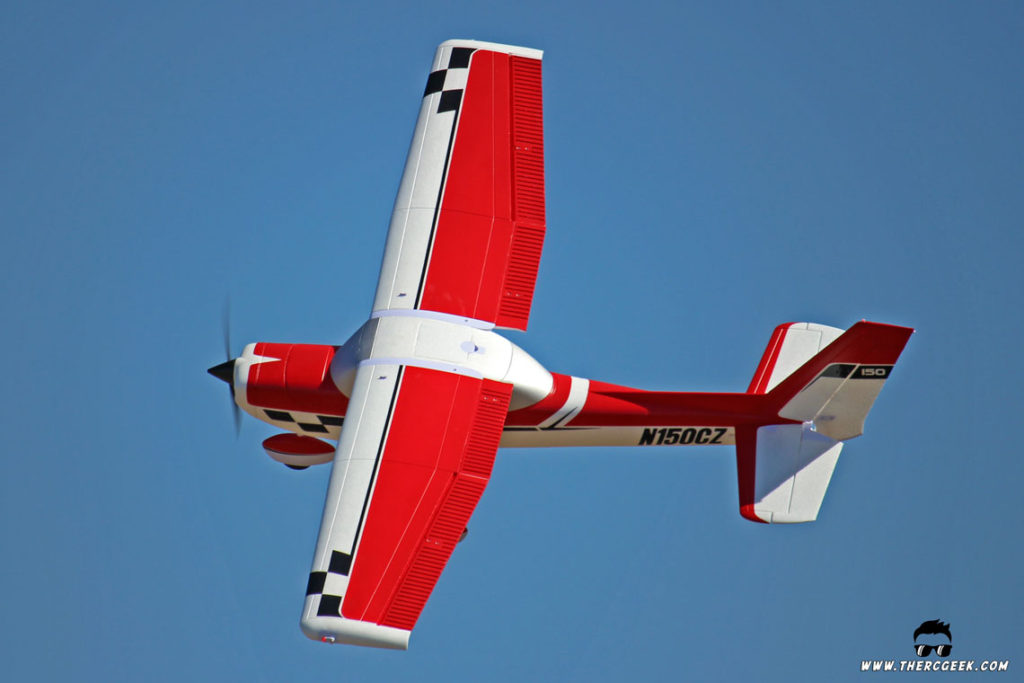 So, if you’re wanting to get into RC, SAFE will get you going quickly and safely but I do recommend also finding a local club and getting some flight instruction in addition.  The local clubs almost always have trainers and instructors available, so don’t be afraid to contact them.  Then use the technology to help supplement the training that you’re getting.  It’s a fantastic tool that should be used when you need it to, but the hope would be to try and avoid relying on it to teach you to fly.  Otherwise you will have to retrain yourself when you start flying without it.

My primary experience in setting up SAFE is with the bind and fly P-47 Razorback and Cessna 150.  So, the focus here will be on how those particular airplanes are setup.  Much of this translates to the other versions of SAFE too, but definitely check the instructions for your airplane.  Also, don’t be afraid to talk with Horizon Hobby customer support too if you have questions about it.  They are always willing to help. 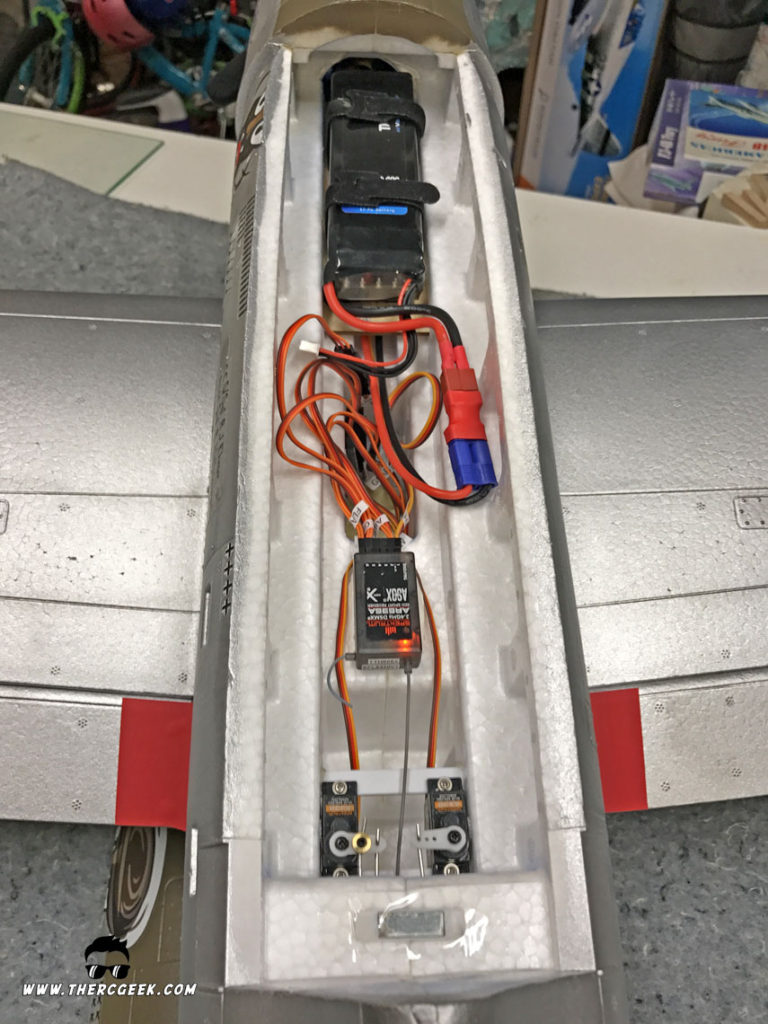 To use SAFE Select, I highly recommend assigning it to a switch so that it can be turned on and off as desired.  To do that, simply move the desired switch you want it assigned to 5 times right after the aircraft establishes link during the bind process.  Otherwise, it can be assigned at any other time by cornering both sticks inwards to each other and then flipping the desired switch 5 times.  When using this method, the dual rate switches must be selected such that they are at 100% end point travel for those channels.  Otherwise it won’t work.  Also, SAFE Select can be assigned to any switches that are assigned on channels 5-9.  I recommend using a channel that is not assigned to any of the aircraft controls.  So, ideally you have at least a 7 channel radio if you’re flying a 6 channel airplane and then can assign the 7th channel independently. Otherwise, you’ll have to look at using it in combination with landing gear, or something like that.  Finally SAFE Select, or AS3X for that matter, won’t be fully activated until the throttle has been brought above 25%.  So, it can’t be checked that it’s working unless that has occurred. 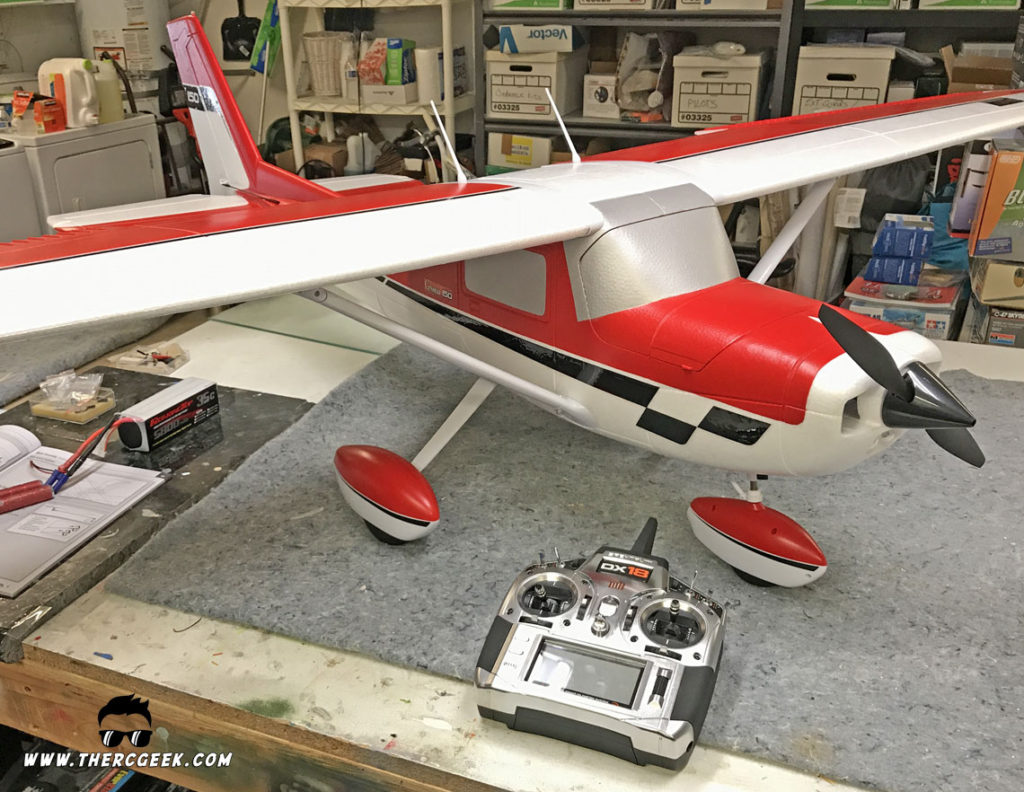 TIPS FOR USING “SAFE” IN FLIGHT 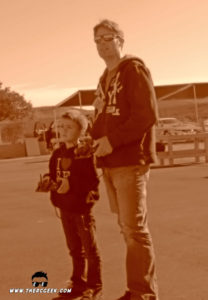 When we talk about using SAFE, the whole goal should be to not use SAFE.  Yes, I said that right!  What I mean is that it’s intended as an aid to help you become a more proficient and comfortable solo pilot.  Use it as you need it, but my recommendation would be to avoid relying on the technology to teach you how to fly.  That’s where you run the risk of developing habits that you will have to unlearn later on when flying without SAFE.  Using SAFE in conjunction with some traditional flight training is quite valuable since you can use it to supplement what you’re learning.  You can enable SAFE Select during the most critical phases of flight to keep the airplane protected, or if you get into trouble, it will right the airplane for you back to level flight.  Also, the technology will help keep the airplane from getting into trouble when you’re maidening a new airplane.  So that is pretty huge, especially if it’s something you’re not yet comfortable with. 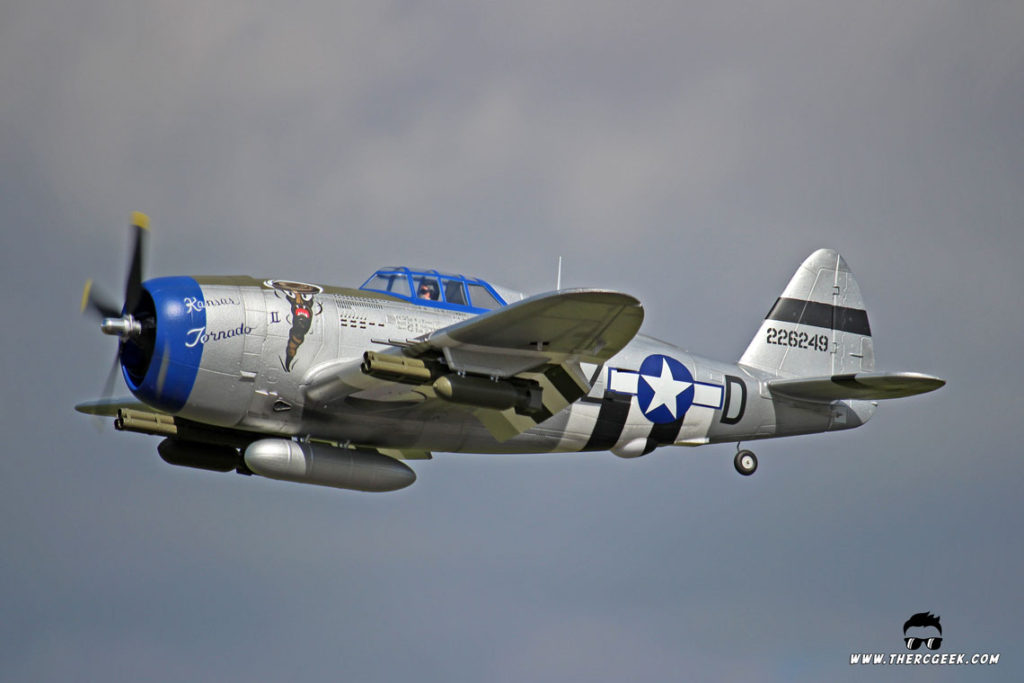 As mentioned, assigning safe to a channel other than your flight controls including landing gear or flaps is recommended.  The reason is that you don’t want to be tied into having SAFE on at any given moment.  That’s where having a 7 or more channel radio is helpful.  That said, if you only have a 6 channel radio, then a good compromise would be to assign safe to the same switch as your landing gear such that with gear down, SAFE is active and gear up it’s inactive.  This way, when flying around and you want to use it, put your gear down, then if you don’t want to use it, put the gear up.  You will be locked in to having SAFE on for takeoffs and landings, but that isn’t a huge deal since you don’t need large stick movements in those phases of flight typically and that’s usually when you want the most protection anyhow being the most critical phases of flight.

One thing to note that I found with SAFE Select is that the pitch and roll angle limits are a function of the amount of throw that is programmed.  What this means is that the higher the rates you have selected, the higher angles that SAFE will limit you to.  So, flying with higher rates will help maintain the feel of the airplane around center when you have SAFE Select enabled.  So, know this and use it to your advantage to help maintain the feel of the airplane.  The goal would be to have a similar feeling airplane between SAFE on and off.  It’ll never be the same, especially at the more extreme deflections, but it can be close with the right rates between the two modes which is to your benefit. 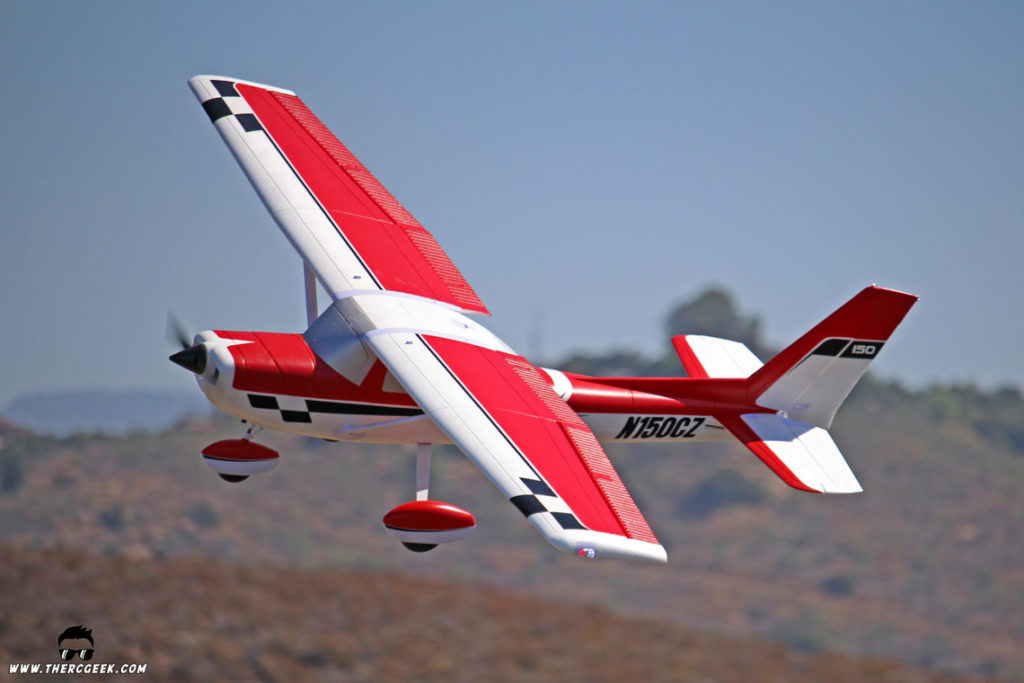 Ultimately, SAFE is there to protect your investment, especially if you’re new or still learning.  But, don’t be afraid to challenge yourself because that’s how we improve our flying.  As you fly, try to  present the airplane and center all your maneuvers on yourself and try to avoid letting the airplane get out too far from you.  Remember, you are flying the airplane, the airplane is not flying you, so put the airplane where you want it to go.  And no matter what happens, never stop flying the airplane.  That’s key if you get into trouble.  Of course accidents do happen but I’ll tell you what my dad told me after my first crash, “if you ain’t crashed, you ain’t flown…” 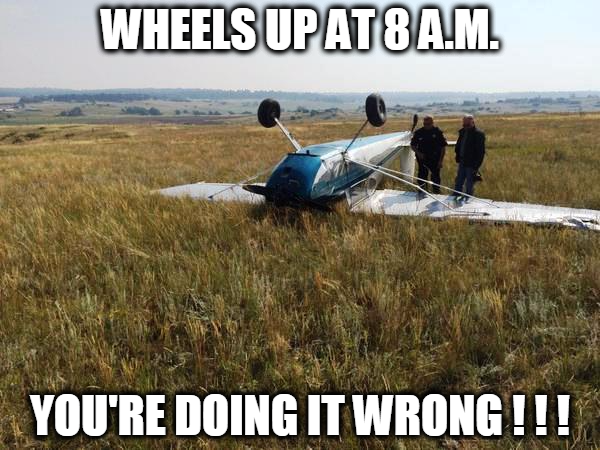 I tell you what, the hobby has really come a long way since I was learning to fly.  This kind of technology didn’t exist at all!  Buddy boxing wasn’t even available when I started.  SAFE is a great tool to have and will help protect you in the air, but my challenge to you is to only use it when you need to.  Supplement it during those critical phases of flight if you need and then challenge yourself to fly around without it and try different maneuvers.  You can always turn it back on if you get into trouble.  And, if you’re wanting to learn how to fly, this is a fantastic tool, but you can’t replace good old fashioned flight instruction.  So, I encourage you to connect with a local club and get some one on one training in addition.  It’s the best thing you can do to learn and it supports the clubs.  If we don’t support the local clubs, then we won’t have them and that impacts where we can fly in a big way.  This is a great community and there are usually always folks willing to help so don’t be concerned about seeking out help.  Until next time, I’ll see you at the field!