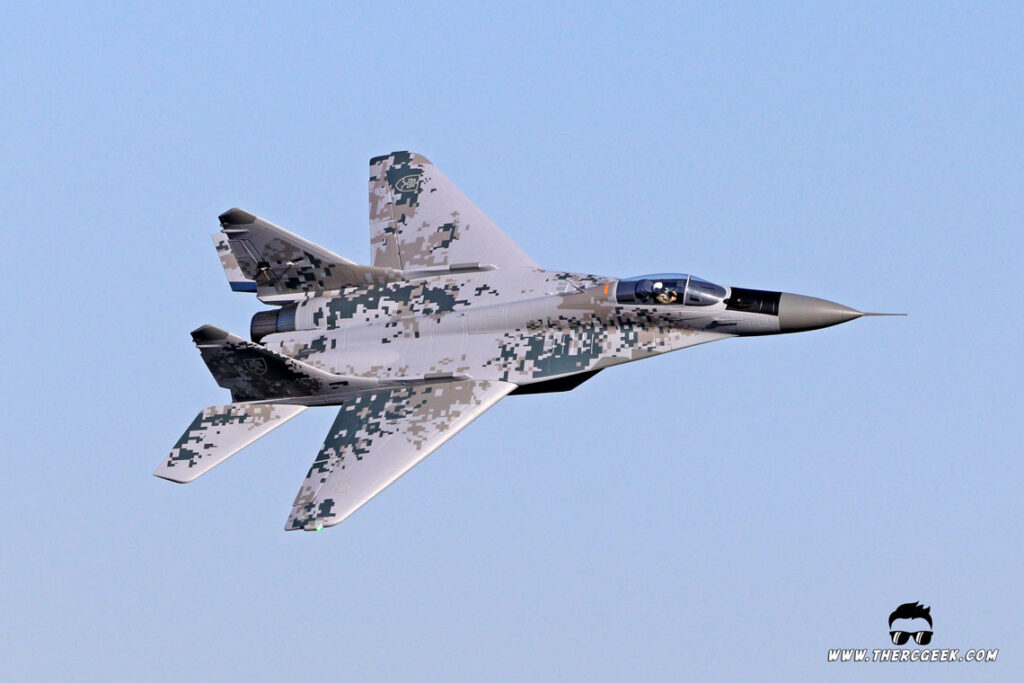 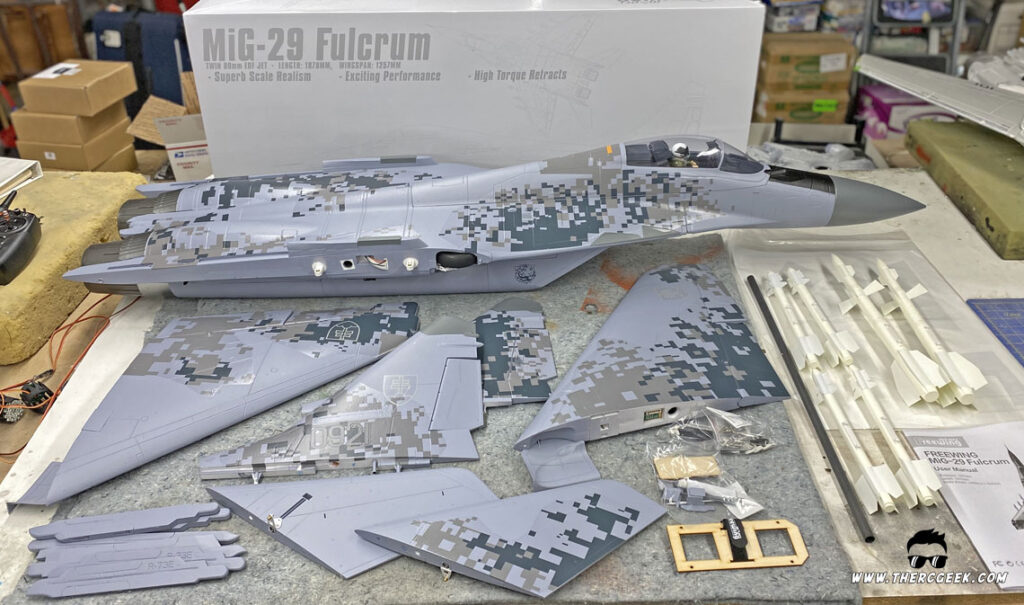 The assembly of the MiG-29 starts with gluing the separate nose piece in place along with the 4 plastic clips along the seam.  I used foam tac to do that which worked great.  There is also a forward wood plate that gets screwed into place that provides a forward battery tray along with some additional strength along the nose seam.  From there, the horizontal stabilizers are placed by first installing the aluminum pivot rod and the tails over it.  The tails are held onto the rod with a collar, so it’s important to ensure that the collar is tight.  To finish it up, the vertical stabilizers are screwed into place followed by the wings. 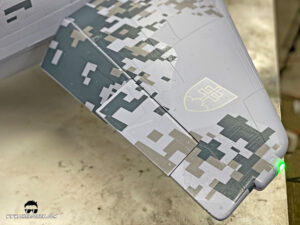 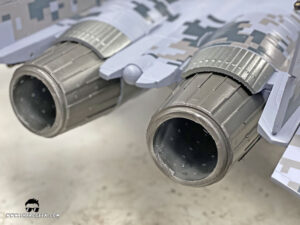 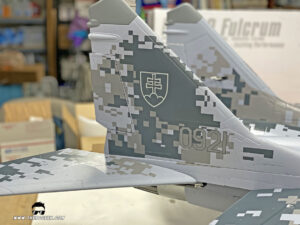 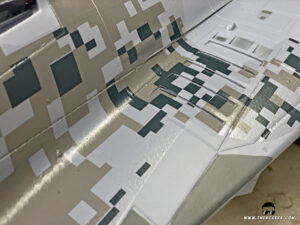 On the bench, the airplane is quite impressive.  It’s a large airframe and the finish on it is quite nice.  The digital camouflage is executed well and looks good on the airframe.  Also, the model features nice scale landing gear as well as gear doors.  Additionally, the cockpit area is cover is plastic which will help save it from texturing in the sun, so that is very nice!  This airplane would really take some weathering nicely.  There is a big tiger decal provided that can be placed on the vertical tail which I  would have placed, but unfortunately the artwork was pretty pixelated, so I decided to pass. 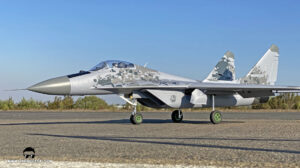 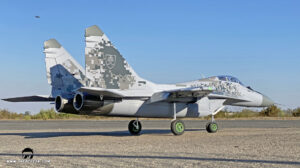 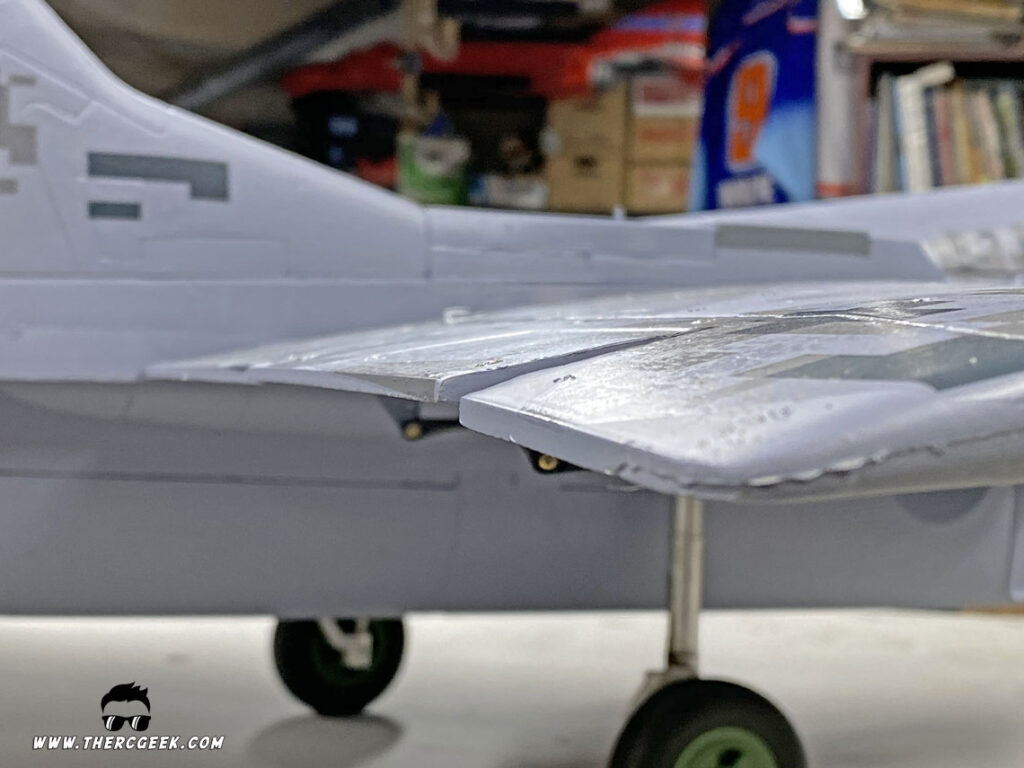 As a whole, I’ve found the Freewing elevator servos on their jets marginal at best.  This model was in the first batch of pre-orders which had a recall on the initial elevator servos.  Replacements were sent out to everyone (and are being included in the subsequent batches) and the servos were replaced and they worked well enough.  That being said, I still wasn’t happy with the performance and so ultimately replaced both servos with Hitec D85mg servos.  This is a large high performance jet, and so this gave me the most peace of mind in flying the airplane and they are a drop in fit. 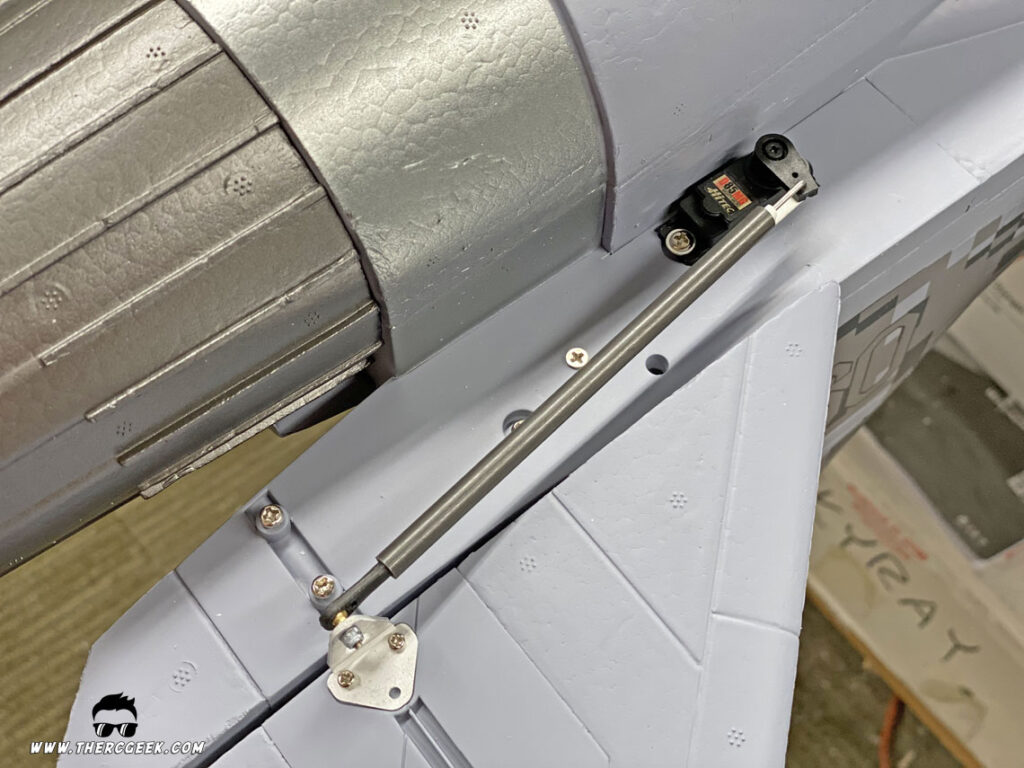 In addition, I wasn’t happy with the servo matching of the replacement stock servos as they did not operate symmetrically left to right.  To rectify this, I setup the tail servos on separate channels which allowed me to program each to match each other perfectly.  This does require bypassing the blue box inside the airplane  and plugging those two servos directly into the receiver so keep that in mind.  In the case of the D85 servos, they are programmable, so could be programmed to match via the programmer also.

The full scale MiG-29 was a full afterburning jet, so adding CenterBurners was a must! 🙂  All of the newer 80mm Freewing EDFs are coming with 36mm diameter inrunner motors, so this is my twin 36mm inrunner setup.  The inrunner designs simply use 4 set screws to clamp the tailcone in place onto the back of the motor which makes it pretty easy.  The look is great in the airplane and is especially great in the air! 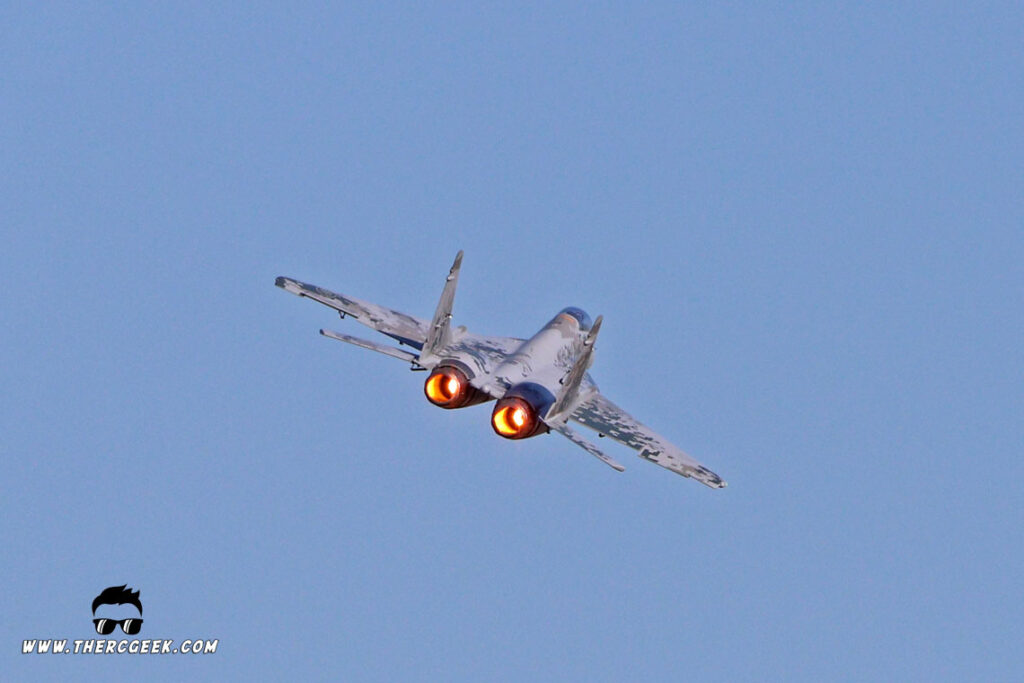 On the control surface setup, I prefer to setup individual elevator and aileron triple rates so I have options for the maiden flight.  Through flying the MiG-29 I ultimately converged on my high rates for elevator and low rates for ailerons as that provided the best feel in the air.    My final recommended control throws are as follows:

For the CG, the model has molded in CG marks which I found to feel about perfect in the air.  Simply pick up the airplane with your finger tips at the rear edge of the mark and look for the aircraft to be level.  I’m using a two Roaring Top 35c 6s 6250 mah batteries which are place as far back as they can realistically go inside the hatch area.  My timer is set to 4:00 minutes as the airplane flies quite efficiently compared to other EDFs. 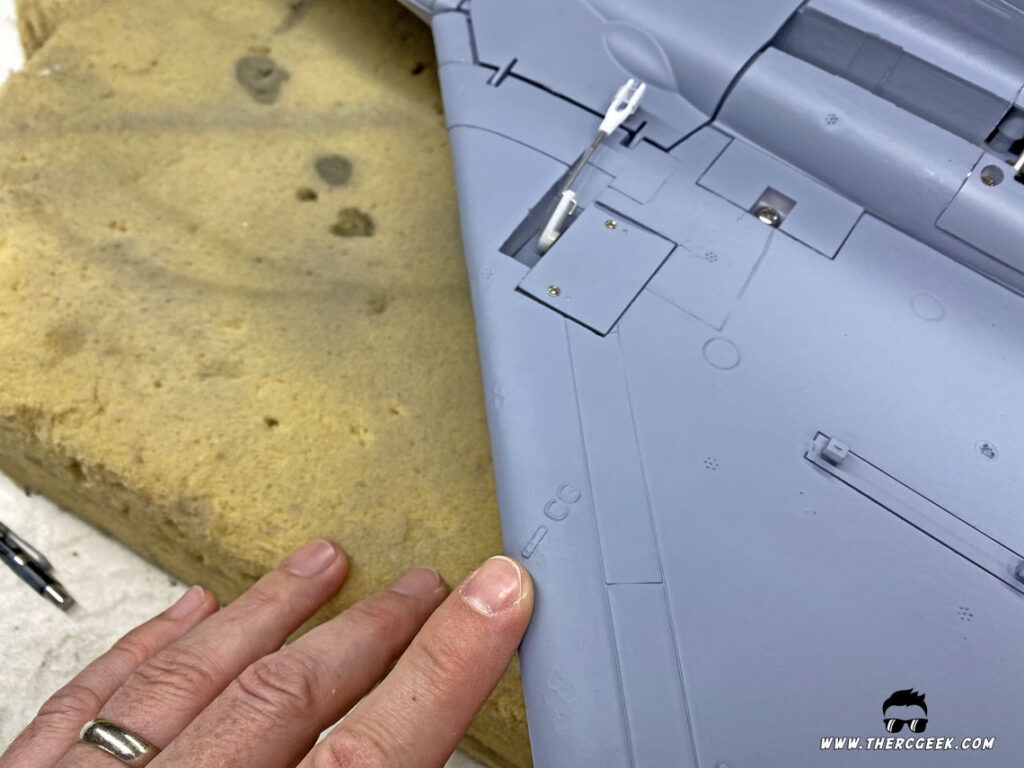 Note that the airplane flying at this CG location does require a good amount of up elevator trim for flying.  The leading edge is set to about 3mm below the lower fuselage line as shown below.  This is noted in the instructions as well and is something to be aware of. 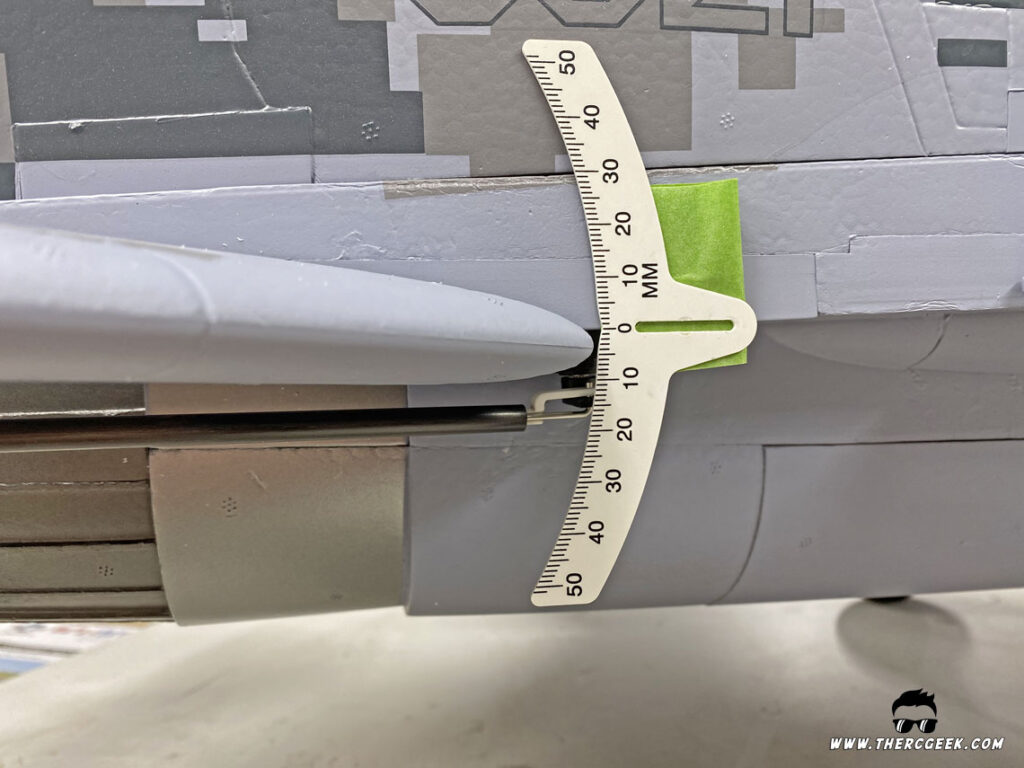 With an impressive looking model like this, the hope is that it flies equally as impressive and I’m happy to say that it holds up to expectations!  The MiG-29 is quick at full throttle has great vertical performance and really looks and maneuvers extremely scale in the air.  Rolls and verticals are all very nice and the model responds well.  It has a really large flight envelope and so slows down on landings really nicely almost being too floaty at times in fact.  That said, it sets into a nice nose up attitude and controlling the descent with power, the model will really get those greasers if you get it right.  The scale landing gear work well and the model has nice large tires, so I would expect grass operations shouldn’t be an issue. 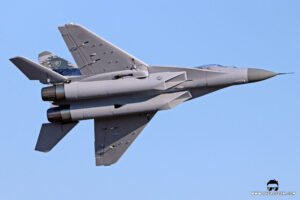 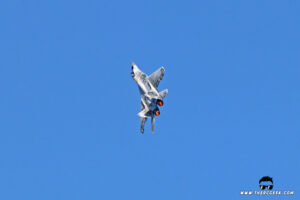 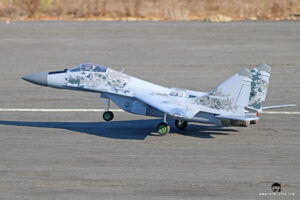 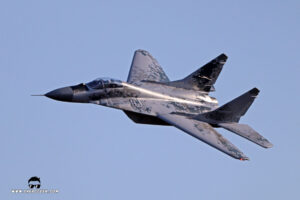 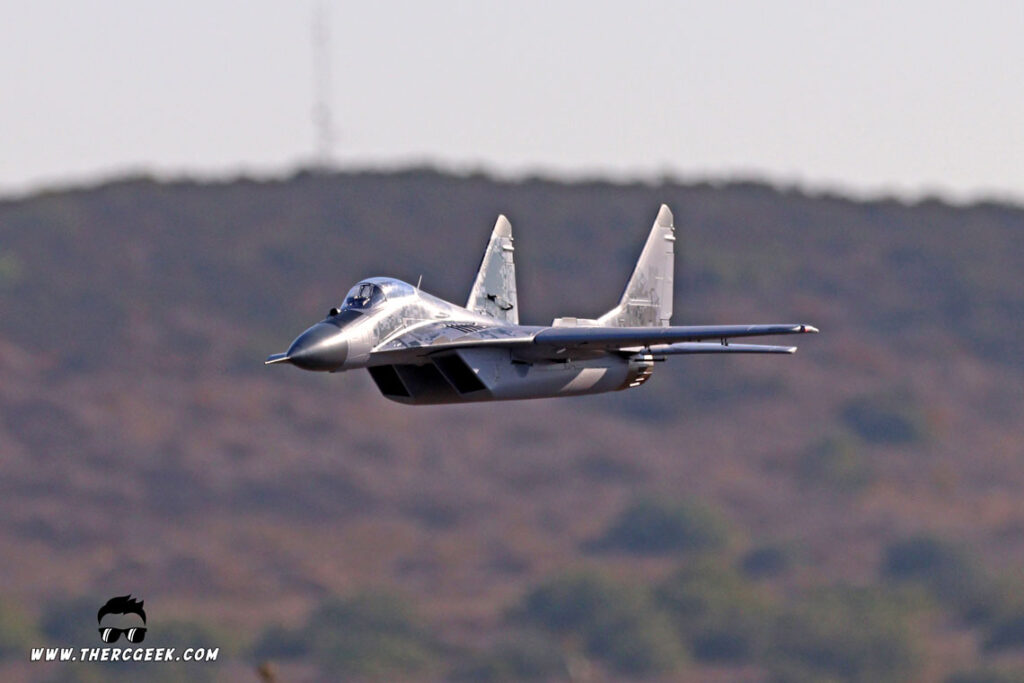 The MiG-29 does include ordnance with the kit as well which is nice to have.  I haven’t flown the model with them yet to date however as they mostly just slow the airplanes down.  Also, the fins are a bit flimsy, so you may noticed some buffeting from them in bumpy conditions.  Hard to beat how the airplane looks and flies clean! 🙂

The Freewing MiG-29 really is an impressive beast of a jet.  The model has a great finish, flies great and has some really nice features included with it.  I also love the size of the model and the way that it looks and maneuvers in the air is awesome.  I really hope that we will see more twin 80mm EDFs in this size because these larger airframes present and fly so nicely.  Until next time comrades, I’ll see you at the field! 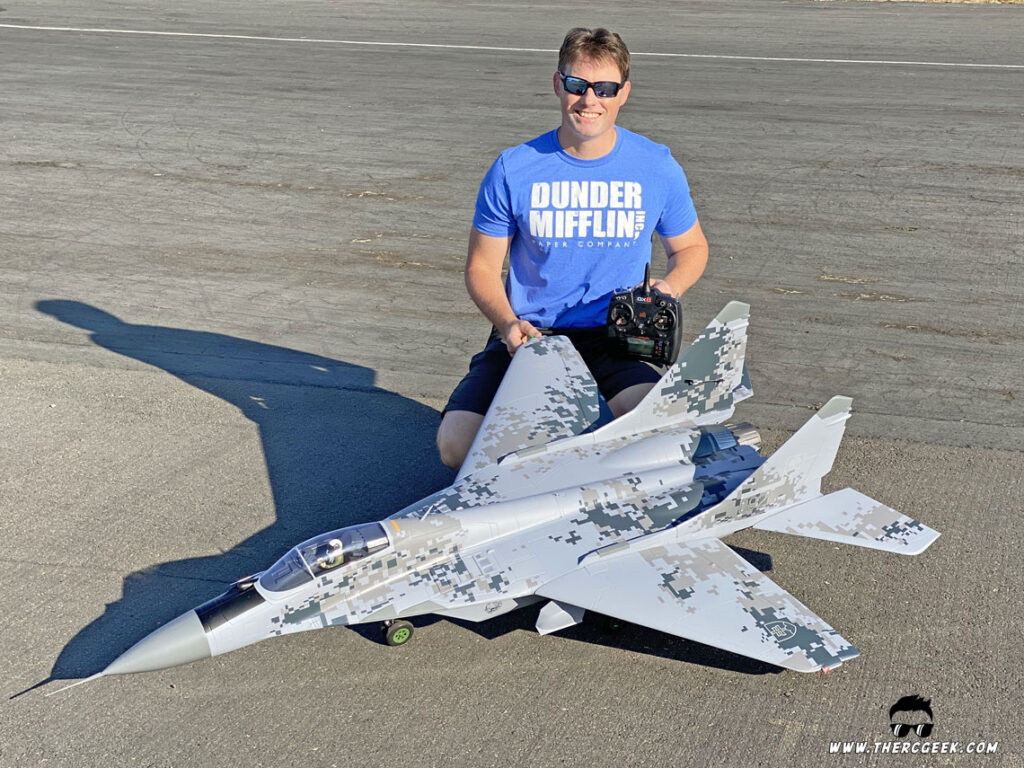