A few days ago in a department store quite close by…

Note – If you’re having issues with batteries in the Millennium Falcon, I’ve posted a How-to on replacing the battery here.

Star Wars Episode VII is rapidly approaching and with that comes new Star Wars memorabilia and RC vehicles!  September 4 was “Force Friday” which was when all of the new Star Wars toys dropped online and at your local department stores.  While cruising the aisles of my local target last weekend, I came across a gem – the AirHogs RC Millennium Falcon Quad Copter!  Needless to say, I couldn’t resist and so I thought I’d give a short little review of it for anyone on the fence about getting one.  The bottom line – it is expensive but it’s pretty darn awesome!  At last I can try my hand at the Kessel Run!

OUT OF THE BOX

First of all, out of the box, the quad Millennium Falcon is a pretty awesome piece of RC.  It really does look good and you have 4 proportional channels which is great!  However, retailing at about $115 full retail it is a bit pricey (best I found online currently is Amazon for $88).  I can imagine that Star Wars licensing these days isn’t cheap. 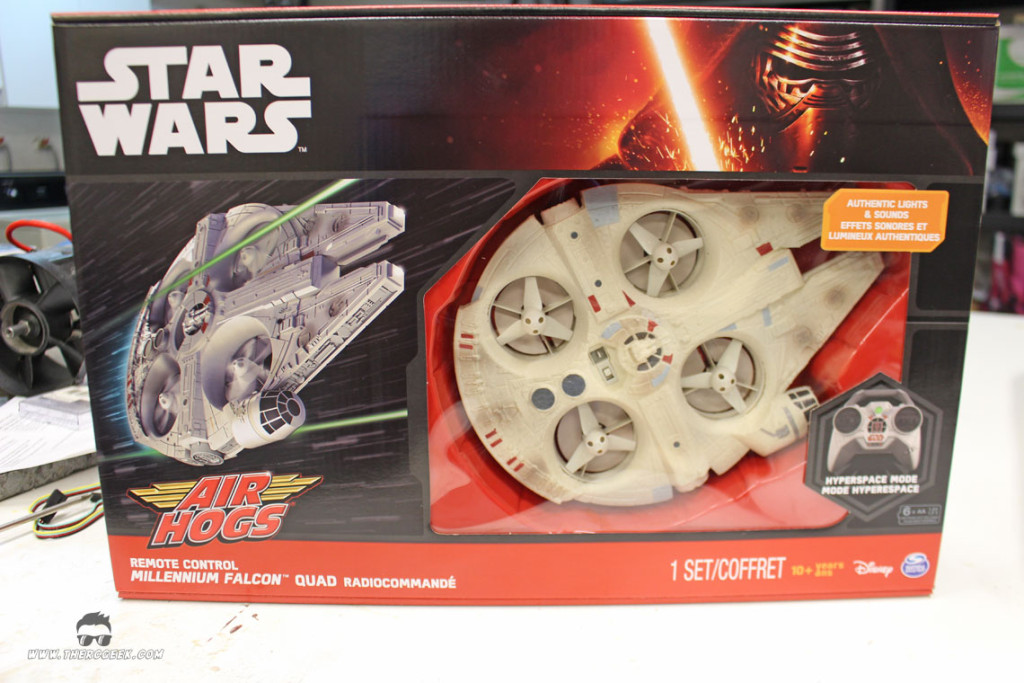 Provided in the box are of course the quad along with the controller, a USB cable and the instructions — have your AA batteries handy as the controller requires 6 AA’s.  The USB cable is provided for charging as it is recommended that it be plugged into a computer on one end and plugged into the controller on the other end when charging the quad.  A charge cable from the controller to the quad is provided in one of the hand grips which plugs into the top of the Millennium Falcon.  I think this is done to bypass the AA batteries for the charging process as I can imagine it would drain the AA’s quickly.  Also, it doesn’t have to be a computer as a phone charger works or even those portable phone charging batteries do the job.  I actually prefer the portable battery as that allows me to take the quad along with me anywhere and charge it even if I’m not near a power source.  The one drawback here is that it takes an hour or more the charge the quad.  Truthfully, with the lithium battery technology these days, there’s no reason for it to take an hour.  Also, there’s no means of changing out the battery and so you’re stuck waiting an hour in between flights — not cool.  Having the ability to swap batteries would have been ideal. 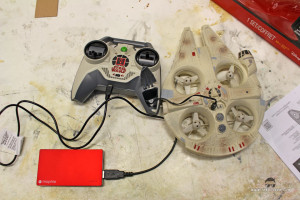 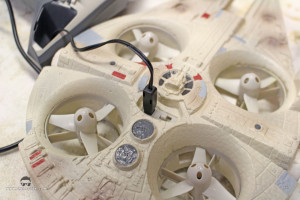 In terms of the construction, the Millennium Falcon is very durable.  The quadcopter construction itself is primarily plastic having a plastic frame and each of the 4 props being shrouded.  The Millennium Falcon body is nicely molded around the quad frame and is made of a durable foam that feels almost like a foam rubber consistency – it’s firm while also pliable and the weight is very light.  What this means is that no matter what the Millennium Falcon may be bumped into, it isn’t going to cause damage to itself or what it may hit…for the most part. 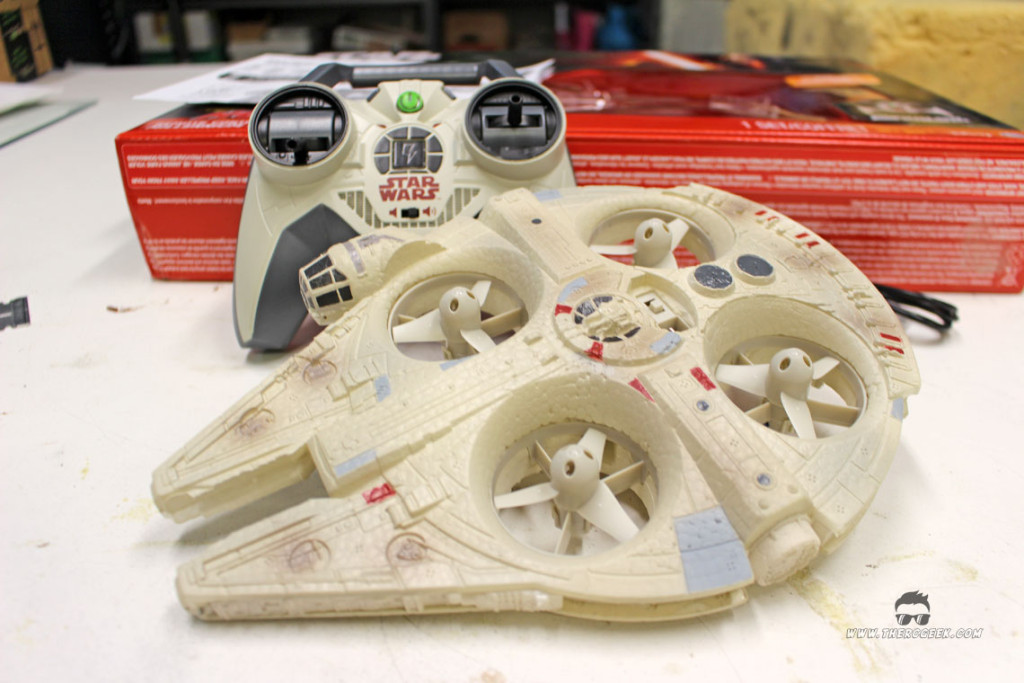 On power up and initialization, the controller makes noise reminiscent of the Millennium Falcon.  Additionally, there are lights in the front (white) and in the back (blue hyperdrive) which add the “cool” factor and also can help with orientation while in flight.  Lastly, the controller has two buttons on the top, one of which provides sounds from the Star Wars movies (for you to have an immersed experience I suppose) and the other acting as the “hyperdrive” for the quadcopter.  The hyperdrive button when pushed while the Millennium Falcon is in flight results in the blue hyperdrive lights flashing followed by a short acceleration forward…I would guess for less than 12 parsecs…

In flight, the Millennium Falcon flies surprisingly well.  It is very stable and having 4 proportional channels you’re able to control all axes of flight which gives you a chance to really have some fun.  It is a toy grade quadcopter and so the responsiveness isn’t the greatest, but I also didn’t expect it to be knowing what I was getting.  That being said, for flying around in your living room, the control I found adequate.  Flying outside in calm conditions is no problem at all too.  Light winds do push it around a bit, but can be manageable depending on how windy it is.  This is where a more responsive quad would do better.  Flight times are about 5 minutes. 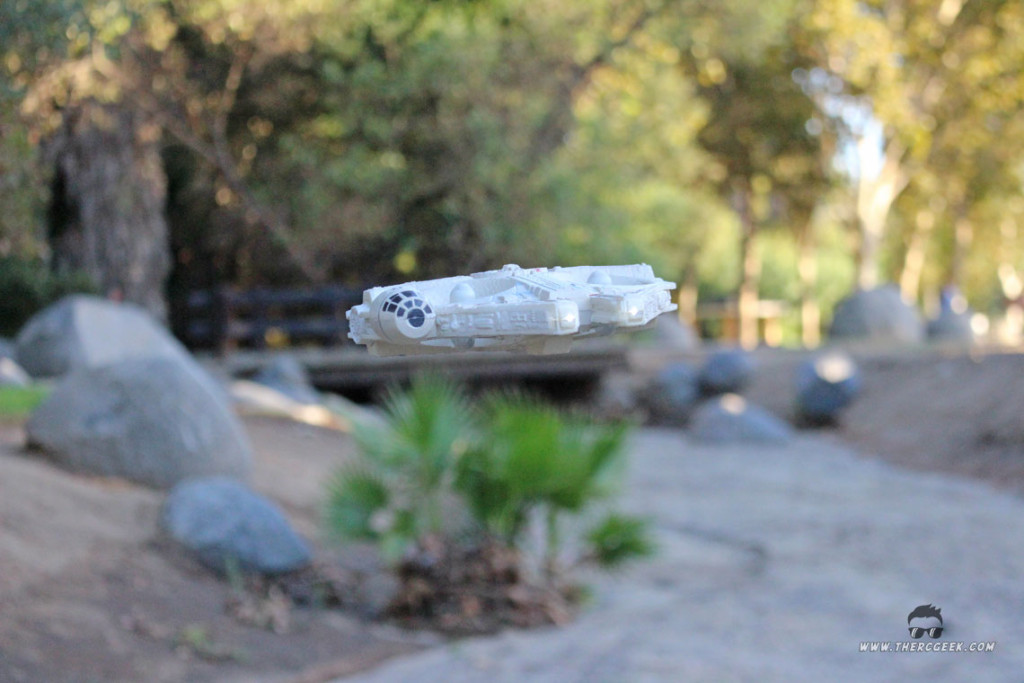 Seeing the Millennium Falcon flying around is the coolest part about it.  The way that it maneuvers around really does characterize how the Falcon would seem to fly.  And if you’re new, with some practice, the quad can be hovered easily enough with more advanced maneuvering available later on given the controllability.

One thing I did notice was that the gyros in the quad may seem to drift.  When flying continuously in forward flight, I found that after some time I had the stick fully forward with the quad not traveling forward much at all.  If you find this to be the case, simply landing the Falcon and re-centering the sticks seems to resolve the issue simply enough.  It’s not something that should exist truthfully, but is easily rectified while flying. 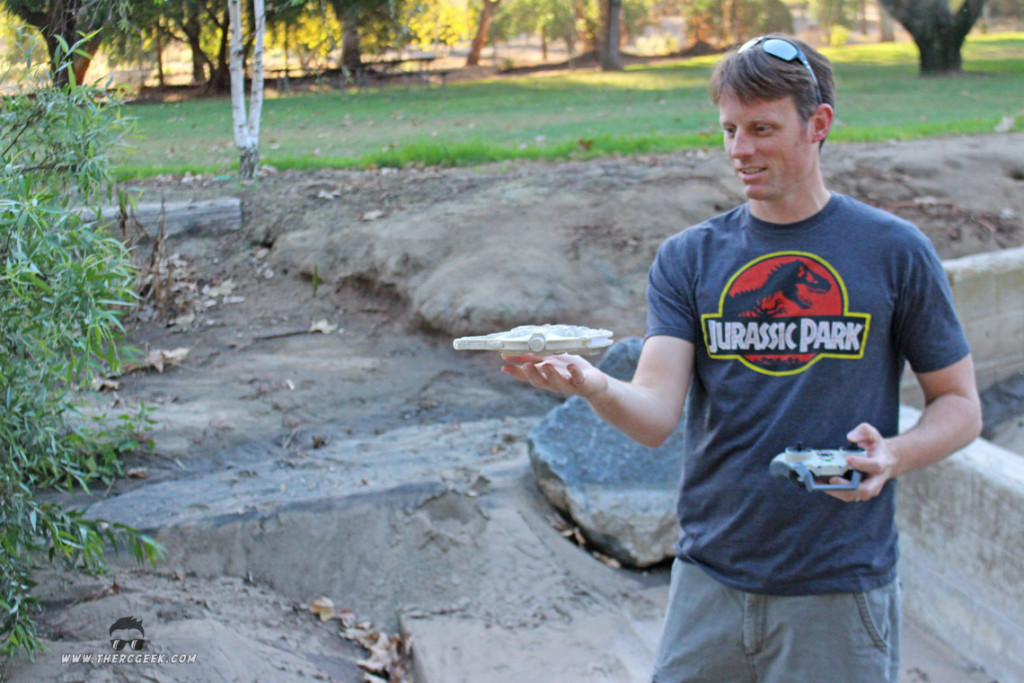 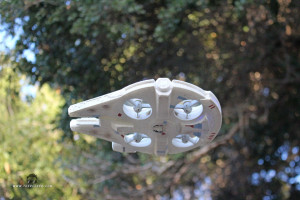 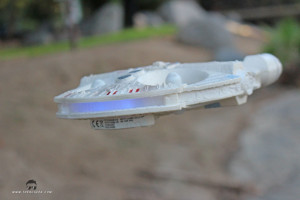 The AirHogs Millennium Falcon is no doubt awesome and any Star Wars fan would geek out over it.  It flies well for what it is, but I do find the retail price tag a bit high.  Also, the charge time is a pretty major drawback in my book.  Having the ability to swap out batteries would have been ideal as then you can have a couple batteries available and have a much higher fun to charge time ratio. 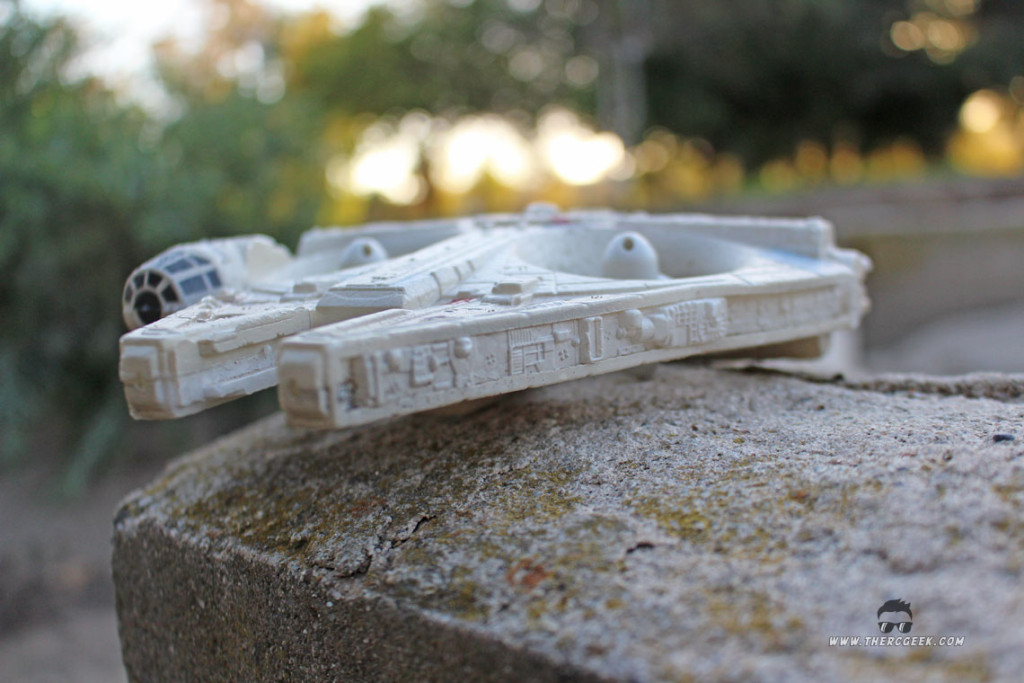