If 1 is good, then 2 or more is better…when setup right!

We as modelers are collectors.  We’re always collecting something related to our awesome hobby, be it RC gear, kits, or the like (you should see my hardware stash, when I go to the hobby store, I usually buy things in multiples).  And of course we always have those kits we’ve stashed away for a rainy day.  A couple years ago, I received an ASM F7F Tigercat ARF kit.  ASM was a line of ARFs distributed by Hobby People and they made some really awesome and unique airplanes (mostly twins).  Unfortunately the company no longer exists and the kits are no longer available.  But, if you find one at some point listed online, they’re definitely worth a look if the subject aircraft interests you.

As an airplane I love the F7F Tigercat (one of my favorite multi-engine warbirds) and so was absolutely stoked to receive the kit!  I promptly collected all of the gear for it but was busy finishing up some other projects and so put it in the que for a later date.  Well, that later date didn’t seem to come until a few months back when a friend staying with my folks, who’s always looking for an RC project during his stays, offered to help get the basic assembly done for me on the airplane.  The last couple weeks I’ve been finishing up getting it flyable (hence some delay in my articles and videos 😉 ) and I thought that I’d use it as a chance to talk about setting up multi-engined electric aircraft.  Though simple in principle, there’s certainly some things to keep in mind that could otherwise cause issues if unattended to.  As we go through this, most of what we’ll discuss is also applicable to a single-engined aircraft too, especially when we discuss sizing a propulsion system and programming ESCs. 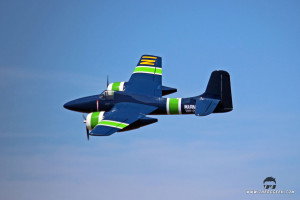 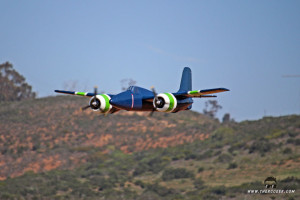 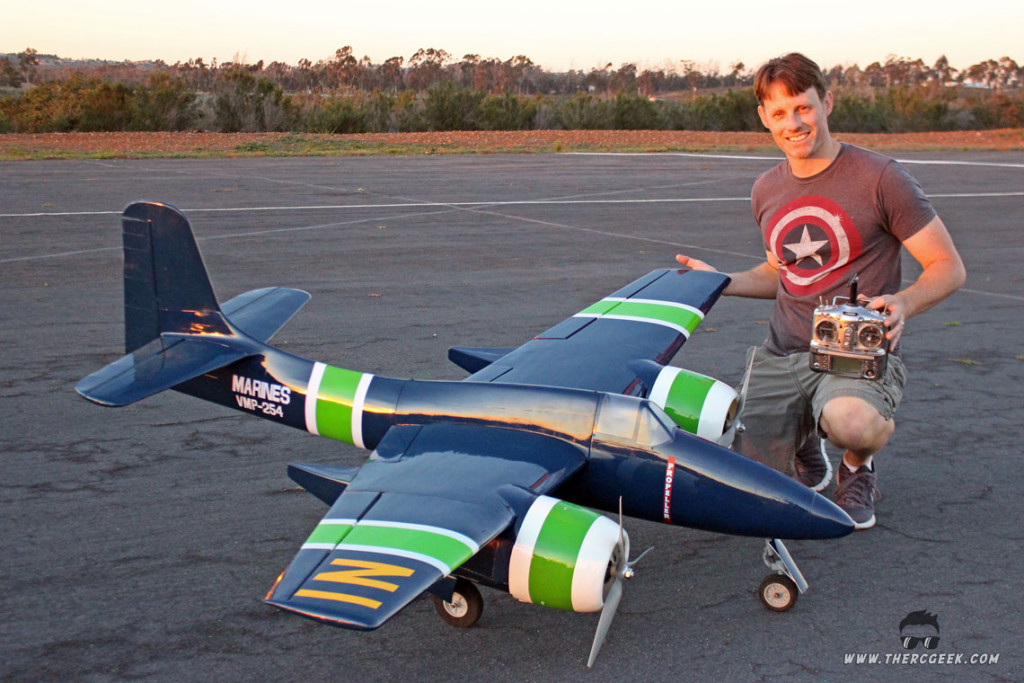 There is a huge selection of electric motors these days but there’s really no one size fits all solution when it comes to electric power and conversions.  The Hobby People, Rimfire, and E-Flite outrunner motor lines have certainly simplified things with their glow equated motors.  However, the bottom line is less about an electric motor named to a glow engine equivalent and more about the motor Kv rating (rpms/volt), propeller diameter and pitch and battery cell count.  It is all about managing the combination of those variables to come up with the ideal power system.  I covered in detail the selection process I use in a post I made about a 5-blade prop powered Sea Fury I had.  In that article (there are links to the tools in there) I covered my top 5 rules of thumb I use in selecting an electric power system which are as follows:

The ASM F7F Tigercat is an 82″ span model and I knew that it needed to fly with authority (the full sized airplane was a pretty hot performer).  Also, I knew that I wanted to swing a scale-ish diameter 3-bladed propellers.  So using my estimating method, I converged on the following power system for the Tigercat which has proven to be the perfect power (if maybe a touch overpowered) for the airplane and provides excellent flight times (7-8 minutes). 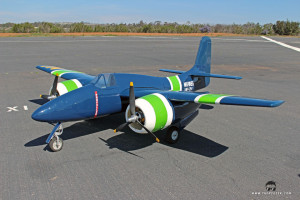 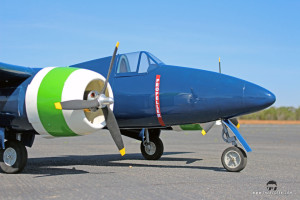 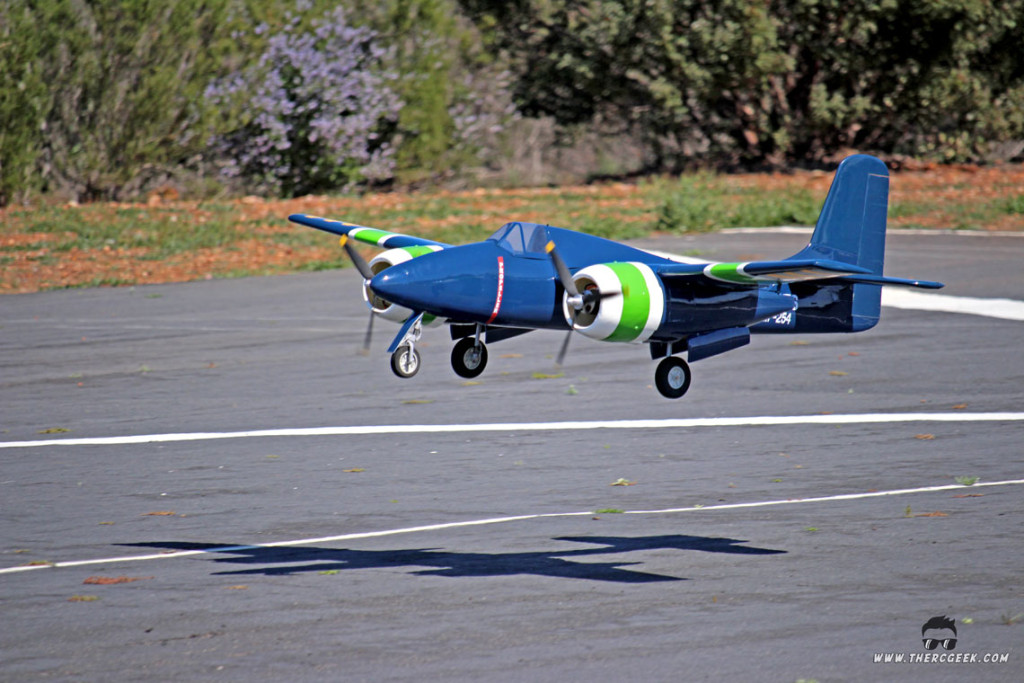 DISABLE THE BEC’S AND PROGRAM THE CONTROLLERS

In terms of setting up the controllers with the radio, this can be done however desired either through separate channels or through a y-connector.  I find the y-connector is by far the simplest, but if you want to do any kind of fancy work that requires individual control of the motors or if you have more than 2 motors and create groups of motors, etc., then that obviously requires they be setup on separate channels as desired.  As an example, my dad has an ASM A-26 Invader and had a desire to run a simulated mag check on the ground where he could run up each side individually while holding the brakes prior to takeoff.  This could only be done through a channel mix on separate channels. 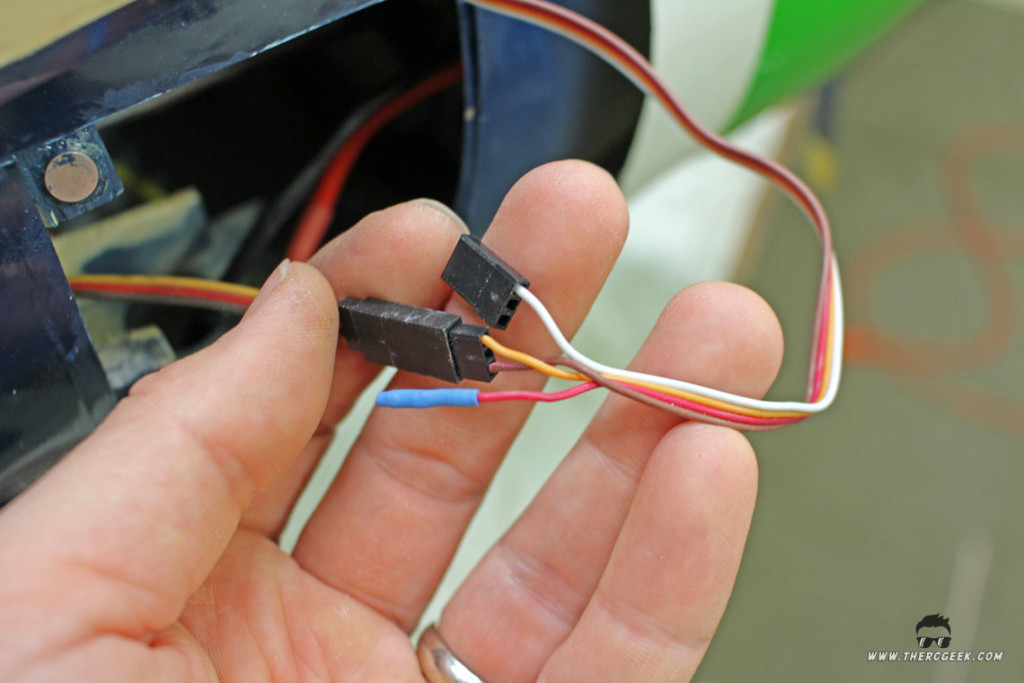 Equally important to disabling the BEC, it’s necessary to program the controllers to suit the motors.  The settings vary depending on the motor, so check the motor manufacturer recommendations.  That being said, for a propeller driven aircraft it’s usually most cost effective to run an outrunner motor vs an in-runner with a gearbox.  For an outrunner, the Castle Creations controllers have an “outrunner mode” in the PWM switching which should be selected and I set the motor timing to “advanced.”  Otherwise, most of the other settings I leave as the defaults.  In-runners require different settings, so always check beforehand (PWM switching is usually set to “12”).  In programming the Castle Creations controllers, I highly recommend using the “Castle Link” which allows you to program the controller easily using a computer.  Note that if you’ve disabled the BEC, you’ll need to plug in a battery to the controller to power it up to program it. 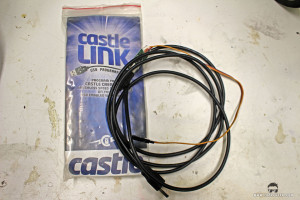 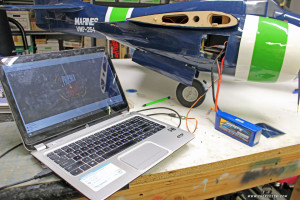 Lastly, when setting up any speed controllers, especially for a multi-engined aircraft, it’s important to calibrate the controllers to the transmitter.  For the Castle Creations controllers, they have “auto-calibrate” and “fixed end points” as options for the throttle response and I highly recommend setting up fixed end points on the controller.  “Auto-calibrate” though nice, conceivably requires that you power the airplane to full throttle before each flight and in cases where you don’t do that, you can get a non-linear throttle response.  Whereas with “fixed endpoints” you are calibrating the controller exactly to the transmitter and it ensures that you get the exact same performance and response for every flight without any kind of run-up.  This is my preference for flying all of my aircraft with Castle ESCs.  The procedure is simple and is available here.

With any RC aircraft propulsion system, ground testing is essential.  With an electric power system, we care about amps, watts, and voltage.  There are some in-line measurement devices that certainly work (something like this) and provide all of that information, however when you start looking at high power setups pulling over 100 amps, I highly recommend running a clamp-on meter as they will handle much higher amps without causing any kind of voltage drop.  With the clamp-on meter, you’ll need to measure the voltage separately while running which is easy to do using a lipo battery cell checker.  Then, to determine the watts, it can be calculated simply by multiplying the measured battery pack voltage (average voltage under load observed on the cell checker multiplied by the number of cells) by the measured amps (Watts = volts * amps).

With this information we are either validating our pre-flight predictions and/or discovering any potential issues.  If the amps are low or high, then it may require a larger or smaller prop.  It’s important to note the amps to avoid over-amping the motor which will ultimately destroy it.  Also with the measured amps, we can get a quick idea of our run time (time (in minutes) = (battery capacity (in amphours)/amps)*60). 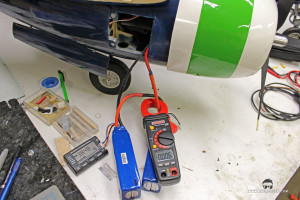 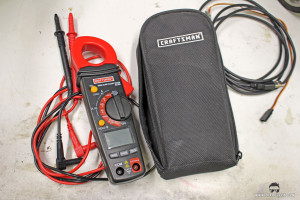 The most important part of course is flying the airplane!  With these few small pointers, you should have a  reliable multi-engined aircraft that will serve you every weekend at the field.  It becomes a plug and play system with no tuning required!  Note that for a first flight on any electric aircraft, I recommend keeping the flight short (3 minutes or less) and then slowly working up the flight times until you reach an optimal time that lands with the battery voltages reading no less than 3.75 volts per cell when pulled from the airplane (another reason for having a lipo battery cell checker).  Have fun out there and get those multi-engined projects going!  See you at the field!