I got my start in scale modeling by building plastic models as a kid.  I built many a model in the back of my dad’s shop as far as I can remember.  Those are some of the fondest memories I have from growing up.  I guess that’s why I collect (though rarely build) so many plastic models, haha!  The “Back to the Future” movies are among some of my favorites and a while back I came across the Polar Lights “Back to the Future” DeLorean and seriously, had to have it.  It was a snap together kit, so figured in a few hours I could probably have a nice enough looking model…if I built it…  Well, my son kept asking me to build the model while it sat on my bench and so I figured, why not grab a second one so we could build them together?  I love building with him and he loves to build pretty much anything (he and my daughter are Lego masters!), so it was perfect!  I figured, while we were at it, why not grab the video camera and try a “family build” segment on my YouTube channel.  My kids are always wanting to bomb my videos anyhow, so figured it was time to officially feature them.  Be sure to watch because there’s some pretty funny stuff in there, especially at the very end.   At one point, we were laughing uncontrollably for no reason whatsoever.

So, we set out on our DeLorean build adventure on a Friday mid-morning after flying.  It was hot outside, so was perfect to just take it easy in-doors.  It sure would have been much more pleasant though if we actually had air-conditioning in our house!  We both eagerly started and tore into the box with my daughter offering up moral support (she’ll have a kit to build with us next time).  With a nice selection of decently detailed parts, it seemed it wouldn’t take too long to get the model together.  My son had it together in about an hour or so…I, being the perfectionist that I am, of course spent way too much time painting the interior and the details so took about 6 hours total.  There’s actually quite a bit of detail that pops out nicely with a little paint.  My son did come back as I was wrapping up and did some exterior detail painting on his which he enjoyed.  The assembly itself was easy enough, but there were a number of ejector pin flashings that need to be cleaned for the parts to fit right.  They initially looked like part of the parts for alignment or stand-offs, but I ultimately realized that wasn’t the case.  Those were the primary source for parts not quite fitting.  The rest of the fit was ok…not great, but not terrible which is about what I would expect from a kit like this.  Also, if you have a kid who plans to play with the car, some glue is a good idea.  Though the parts “snap” into place, they also “snap” out of place just as easily when handling it! 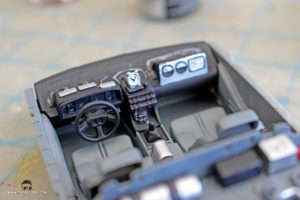 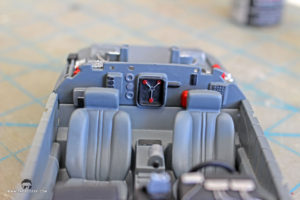 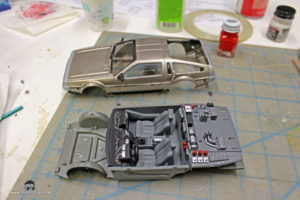 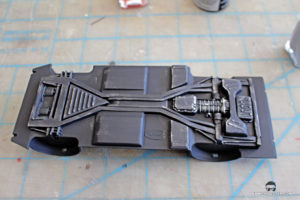 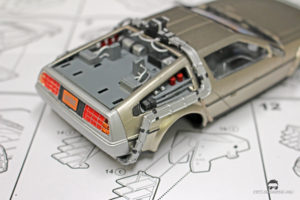 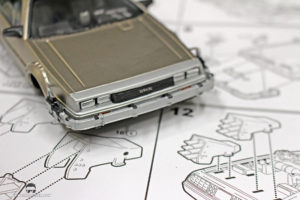 The detail was decent enough for what the kit is and with some painting really pops out well.  It’s a simple enough build and we had a good time putting them together.  Plus, we have a couple of cool looking “Back to the Future” DeLoreans to add to our collection now!  One of the nice features is that the body comes out of the box with a very convincing stainless steel finish.  No rust on these puppies!  The hardest part is keeping it under 88mph though…you never know what might happen if we get there! 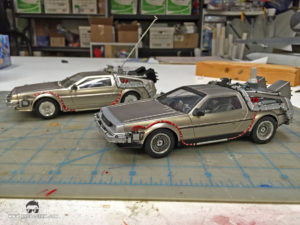 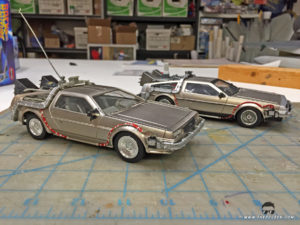 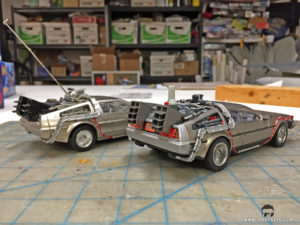 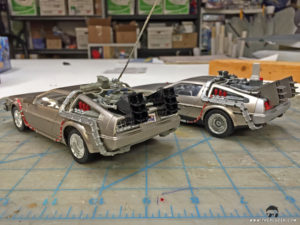 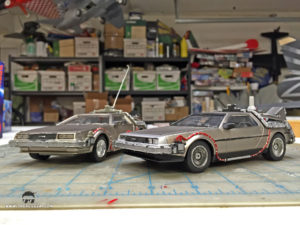 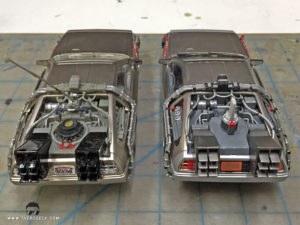 With so many distractions these days, plastic models are a great and simple way to introduce kids to our hobby.  Maybe it leads into RC airplanes or cars, or something like that?  Or maybe it doesn’t?  Either way it’s a great introduction to something more than just another modern day distraction.  For me, I love sharing what I did as a kid with my kids.  My dad did the same with me, only his love was stick and tissue airplanes.  In the end, I can only hope that my kids will look back and enjoy the time we spent fondly the same I do when I think of the building I did as a kid.