The Ultimate in ‘Mike Rowe’ Aerobatics…

As I had teased in my E-flite UMX A-10 flight review video, I’ve been having a lot of fun with the E-Flite UMX Pitts biplane and so wanted to put together a flight review video for it.  E-flite has really built up an awesome line of UMX airplanes and this Pitts is one that I’d been eying for a while.  Scale aerobatics are a fun and welcome change to my otherwise scale warbird and jet flying and when they came up on sale a while back, I quickly picked one up.  I’m glad I did because the airplane is an absolute blast to fly.

The full scale Pitts is a pretty iconic aerobatic airplane and what’s interesting is that the aircraft that are campaigned by both Sean Tucker and Skip Stewart are based on the Pitts airframe.  Highly modified of course, but still based on the Pitts.  So that tells you a lot about the design as those guys do some pretty incredible flying in those airplanes.  They’re even approaching some of the 3D aerobatics that we’ve been doing in the RC world and it’s pretty crazy to watch.  So, trying to replicate that in small scale is always a fun challenge and this tiny Pitts does a good job of it. 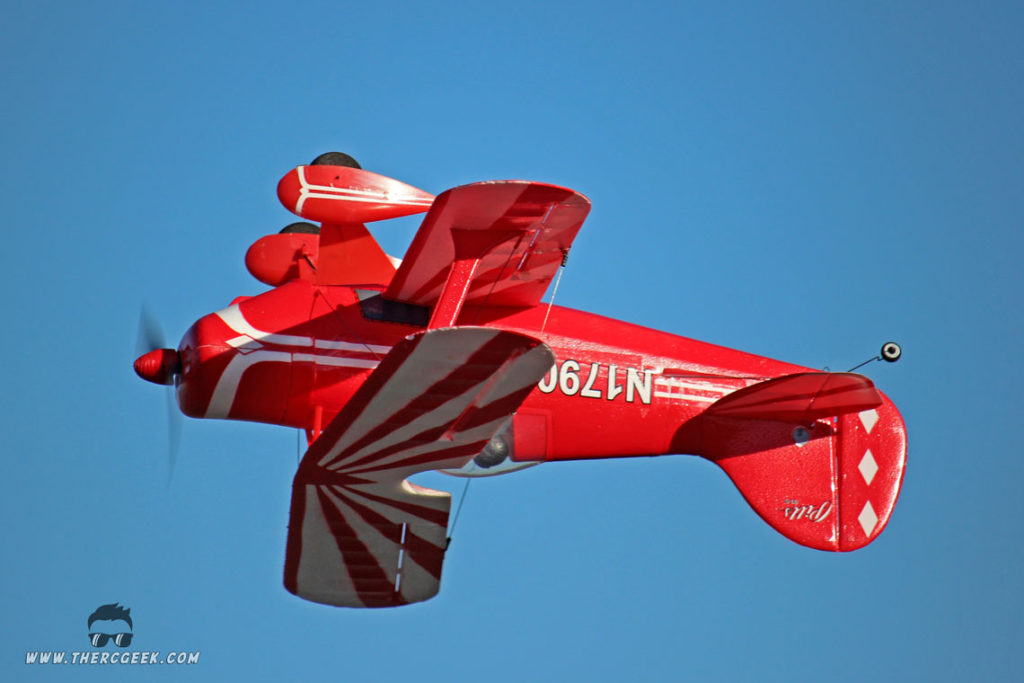 Just like the UMX A-10 and other E-flite UMX aircraft, the Pitts comes out of the box completely ready to go.  Bind and setup your Spektrum radio and you’re good to go in about 10 minutes.  E-flite has done a great job with the shape of the airplane and the color scheme is a great choice.  It’s a pretty awesome representation of the pitts.  The top of the forward cowling is removable for battery access which provides a large area for a 2s flight battery.  The airplane has some rigging which is a good thing because I found that the wing strut glue joints popped free at one point and so had to be re-glued the course of flying the airplane.  Otherwise, the airplane is very well done and well made.  The airplane is very light, but surprisingly durable too.  It’ll handle any aerobatics and all sorts of terrain.  I’ve had a few flip overs based on the different surfaces I’ve operated from and the airplane has handled it like a champ!  One thing to check periodically is the hinge tape to make sure everything is in place.  You can fix any lifted areas with some scotch tape if needed. 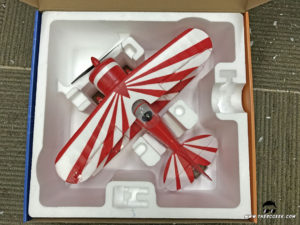 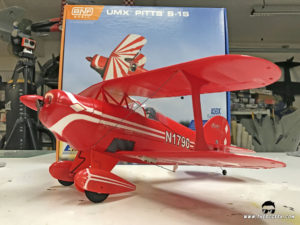 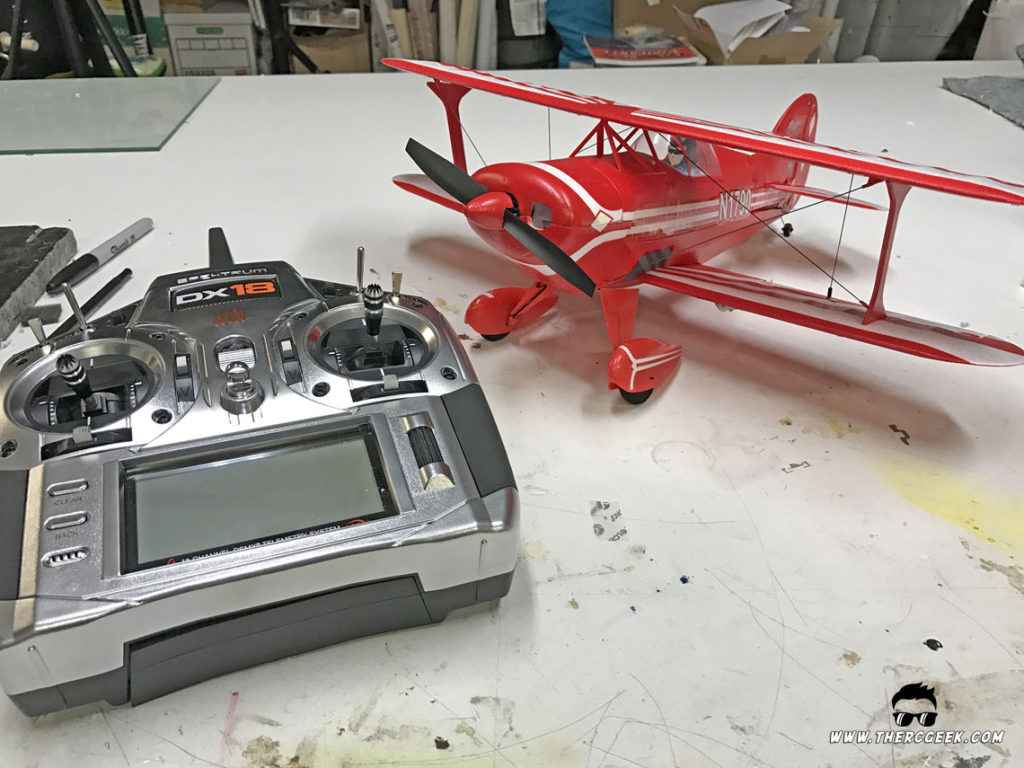 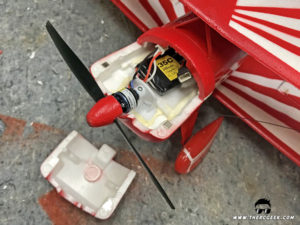 The manual recommends setting up the rates at 100% end points and  70% end points for low rate.  I found through flying the airplane that the 100% rates were the best.  This gives you plenty of throw for crisp aerobatics.  I have about 10% or so expo all around on that too which they also recommend.  Just like the A-10, these little servos don’t handle being commanded beyond 100% end points, so just remember that to avoid burning up any servos.

For CG it is right per the manual which is 32-33mm as measured from the upper wing leading edge root aft.  I’m using a 2 cell 300 mah pack which is placed in the nose through the cowl hatch and this works well.  The airplane doesn’t feel nose heavy to me and the flight times are pretty awesome being well over 5 minutes.  The pre-installed velcro is pretty fine and doesn’t seem to stick all that well to my industrial strength stuff, but I haven’t ejected any batteries from the airplane yet, so it must be doing ok. 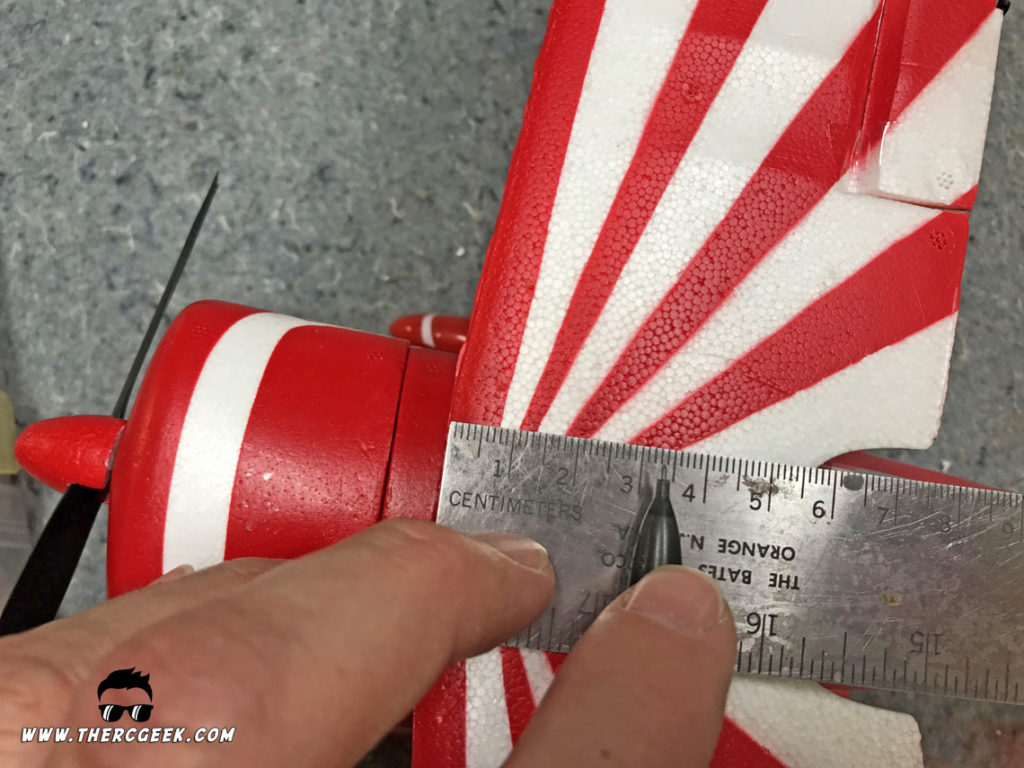 This little Pitts is an absolute blast to fly!  The power and speed of the airplane is awesome and it maneuvers and flies magnificently!  I’ve even been taking the airplane on trips with me for some park flying when I get the chance I enjoy it that much.  The power and maneuverability is such that you can fly relatively easily in a confined space if you need, so it’s really good for most flying spaces.  It is a little quick at full throttle and has great vertical pull, so use each of those according to the space you have available. 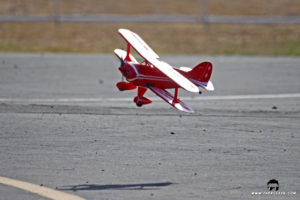 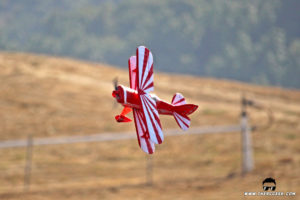 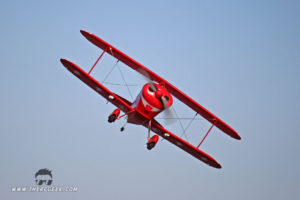 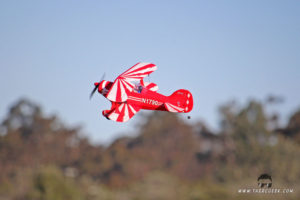 In terms of aerobatics, it’ll do anything the full size can do and any combination your thumbs can input.  Also with the AS3X, it handles winds very well.  Better than some of the other UMX airplanes I’ve seen.  Now, my favorite maneuver though is the knife edge.  The airplane will knife edge literally for days!  Right or left, it doesn’t matter, it’ll just lock in forever and it’s awesome.

One thing I did do was to tweak the prop just a touch to give it a little more pitch.  I don’t know if it’s doing much, but the vertical performance is pretty darn good.  Having this airplane really makes me want a larger Pitts in my hangar.  Also, that tiny little outrunner motor is surprisingly noisy for what it is.  It almost sounds like a geared motor.  I only bring it up because my friends have nicknamed the airplane the “noisy cricket” because of it which is pretty fitting.

This little UMX Pitts is so much fun to fly, I’ve been carting it around with me quite regularly.  It looks great, you can fly it pretty much anywhere, and it just flies awesome!  I can’t recommend it enough.  It really makes me want a larger Pitts in my hangar.  It’s been a long time since I’ve actually had an aerobatic airplane like this, so it’s conjured up a desire to continue and practice scale aerobatics on a larger scale.  So, we’ll see what we can find!

Until next time, I’ll see you at the field!