This week, we’re looking at the E-Flite 70mm F-16 Thunderbirds Fighting Falcon.  This is a really good flying little jet that has an amazingly wide speed range which really makes it fun.  E-flite has gone with the Thunderbirds livery on this one which is well represented on the airplane and makes it easy to see in flight which is nice.  Also, just like the ViperJet, the airplane has SAFE select as an option if that’s something you’re looking for as an added layer of protection.

The E-Flite F-16 Thunderbirds is a pretty simple assembly process.  Instead of the tails being fastened on like many other airplanes, they are simply glued in place which is simple and effective.  The instructions called out the use of CA for everything, so that’s what I used and have had no issues at all.  I did make sure to clean off overspray on the foam for the stabilizers though as the over spray does reduce the efficacy of the bond.  With the tails and dorsal glued in place, the wings are bolted on over the carbon spar and it’s on to the radio.  The nice thing is that there’s no need for running wires or anything in this airplane (unlike the viper) based on how the wings attach which really simplifies the setup. 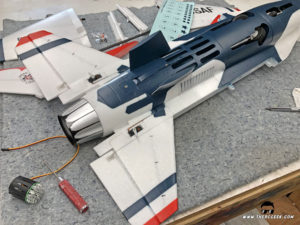 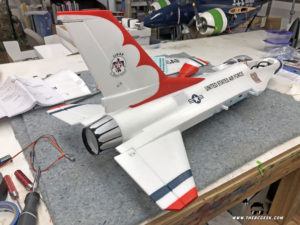 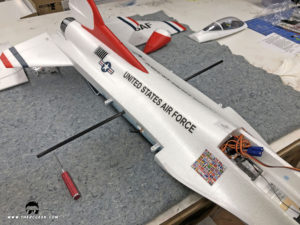 With the airplane together on the bench, it’s a really nice looking airplane and it’s a nicely sized 70mm airframe being a little bit bigger than the ViperJet.  The paint scheme looks good and represents the thunderbirds quite well.  You do have to add all the blue stars on the tail which are simply peal and sticks you put on.  Also, you get to choose which number airplane you prefer too and I of course had to go with the lead solo #5.  I figure that’ll help up my inverted game so I can read the number on flybys… 😉 One other thing that is worth mentioning is that E-Flite has really upped their EPO game of late as these latest airplanes have been extremely smooth (the E-Flite pitts is the smoothest foam airplane I’ve ever seen!).  The F-16 is no exception, the finish and smoothness are fantastic. 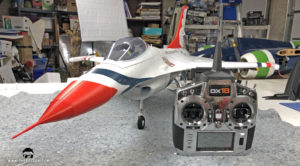 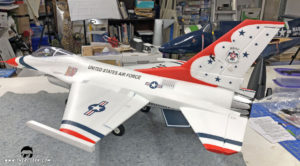 One of the nice features is the airplane comes stock with shock absorbing landing gear.  It’s really nice to see that vs wire gear on an airplane this size and no doubt it helps on those hard landings too.  Interestingly, the dark blue thunderbird on the underside actually hides the landing gear openings (as well as the aux air vents) on the underside when the gear are retracted which is really nice and hides them well in the air.  The last thing worth pointing out is that the leading edge extension is plastic which is an excellent features since this area is most likely to get chewed up in handling without that. 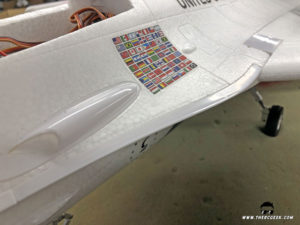 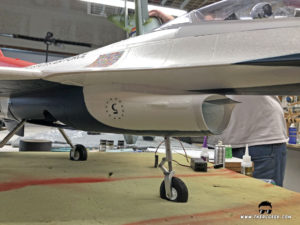 Now, I did do a couple small modifications.  First of all, adding a centerburner into the airplane was a necessity since it is a Thunderbirds F-16 afterall!  Plus, the F-16 is ideal for a fun modification like that and it looks good in the air.  The other thing was, the wingtip missile rails had molded missiles on them.  Since the thunderbirds have never flown with ordnance, only empty missile rails, those had to go.  The missiles were simply cut off of the rails and then a small carbon rod was embedded and glued on the underside to stiffen it up.   Works great and helped the Thunderbirds look. 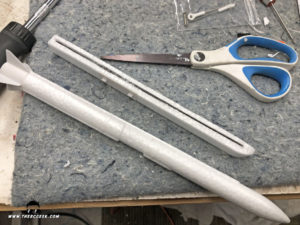 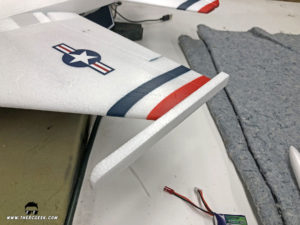 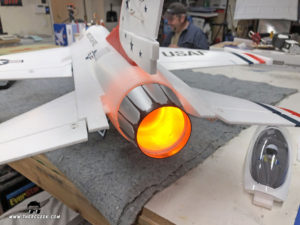 Setting up the airplane, this was the bind and fly version of which means it includes SAFE select.  Be sure to check out my discussion on that technology with some suggestions for using it if you plan to use it with this airplane.  The thing to keep in mind is that there are two distinct bind procedures, so keep those in mind.  In this case, I became aware of a small bug in the ViperJet which limited the rudder throw with SAFE select off.  I noticed this here too, so I actually bound the airplane with SAFE select on and then assigned it to a switch to turn it off which allowed me full rudder throw without having to adjust end points in the radio.  If you can get away with flying this airplane without SAFE, then I definitely recommend it as the airplane is high performance and agile so you’ll have a lot more fun with it.  This airplane loves those high alpha slow speed passes, and you can’t do that with safe.

E-Flite is really good about providing meaningful CG and control surface recommendations which I always start with.  Through flying the airplane here’s what I’m using for throws which equate to my low rates on my transmitter for reference.  Note that there’s no expo in all axes in this case.

The nice thing with this airplane is that it has quite a bit of battery space compared to the ViperJet, so as long as the CG location can be maintained, larger capacities fit easily.  In this case, I was simply using the same Roaring Top 4000 packs that I bought for the ViperJet which fit handily in there.  The fan isn’t pulling a ton of current, so you don’t have to go heavy on the C rating.  The 4000s I’m using are only 25c and work perfectly and are light weight. 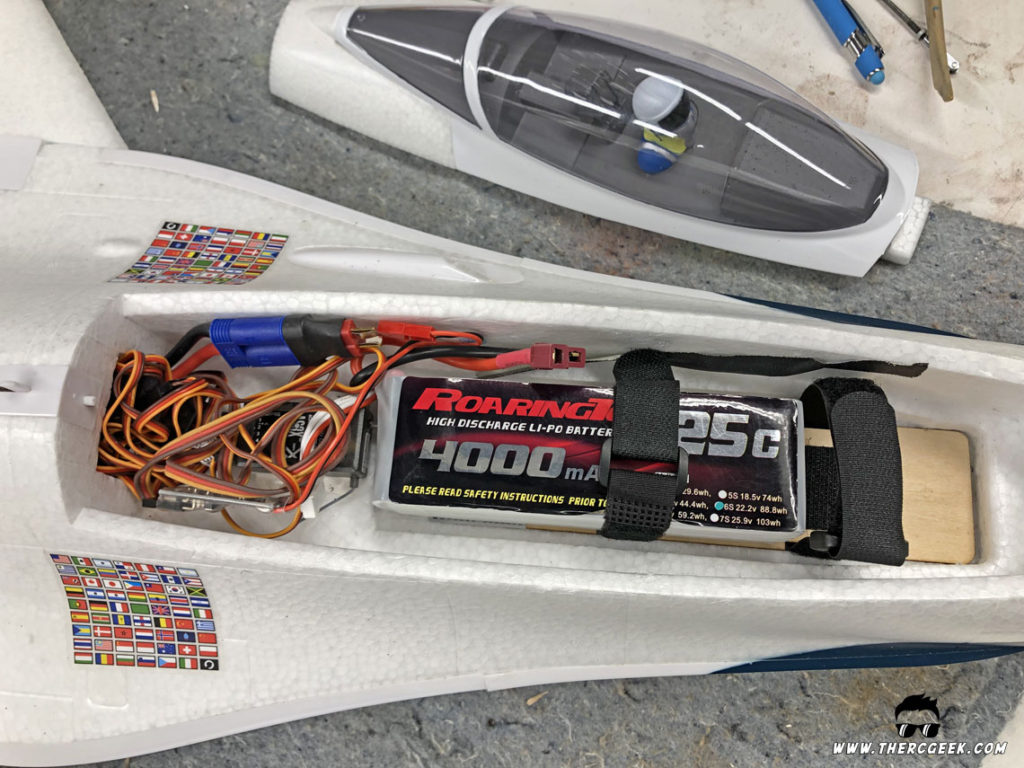 In terms of the CG, I started on the forward side and found the airplane to be quite nose heavy.  The nose would drop pretty noticeably in rolls.  So, I ultimately moved the battery as far back as it would go in the battery compartment and that ended up being about perfect.  This equates to about 100-105mm as measured from the wing leading edge root  aft at the fuselage which is the rearward range of the recommendation in the manual.  I’m just CGing the airplane with my fingertips and then looking for the aircraft to be level or slightly nose down.  For battery, as mentioned, I’m using a Roaring Top 25c 4000mah pack and as mentioned is placed all the way to the rear of the battery area up against the receiver.  The airplane flies great there and doesn’t drop the nose at all in the roll. 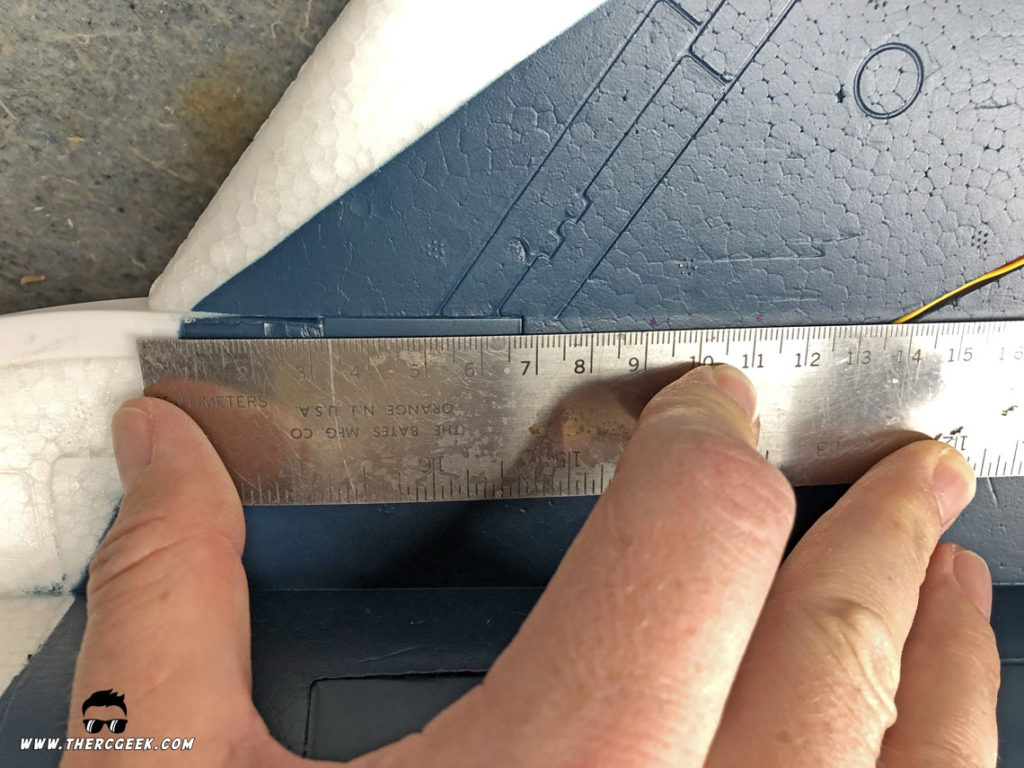 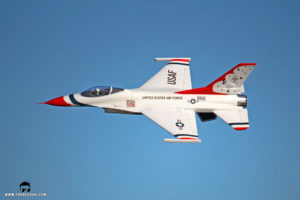 In terms of flying the F-16, it is a great flying little jet that has an amazing speed envelope which really makes it fun.  It’s fast when you want it to be yet will do the slowest high alpha passes all day long.  It really excels at the slow speed passes, just slow it down and hold the elevator to keep the nose up and it locks in super stable, it’s pretty killer.  At the same time, the airplane is quick at full throttle, has great vertical and great maneuverability just like an F-16 should which means that you can really do a lot with it. F-16s land like delta winged aircraft, so if you don’t see the bottom of the airplane on the approach, you’re going to be too hot.  Play with that high alpha performance and learn how to utilize it on the approach and you’ll be able to really slow the airplane down at landing.  The goal should be to set the pitch attitude with the elevator and then use your throttle to control your rate of descent.  Oh, and don’t do what I did and tie the record for the worlds lowest pass…doh!  She handled it like a champ though! (see the vid) 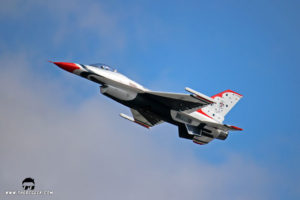 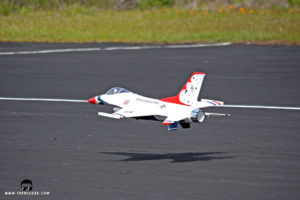 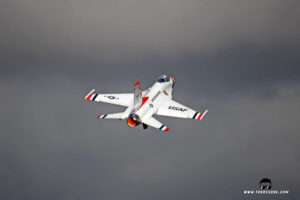 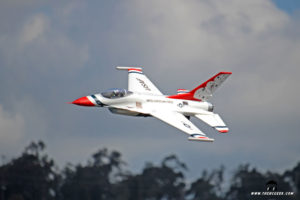 Now, I know the question that I’ll get is how does this compare to the viperjet.  Well, I can tell you that it flies equally as well, but in a different way.  The thing with the ViperJet is that it really locks in and flies on the wing really well.  Not surprising considering the wing planform and proportions of that airplane.  The F-16 on the other hand is a different animal in that it’s more of a brute force kind of an airplane.  It flies great, but excels at different things.  First of all, there’s no way you could slow the Viperjet down the way you can with this F-16.  It’s just in the nature of the design of the F16 with that low aspect ratio wing and leading edge extension it has.  The other thing is that the aircraft response and feel is different.  The F16 flies and responds like a scale jet where the Viper flies more like a sport jet.  Either are great first jets so depending on the flight experience you’re looking for, it gives you options which is a good thing.  I do feel that the Viper is a touch faster at full throttle, but the F-16 is also a little bigger.  Interestingly, the F-16 and the 80mm F-4 are about the same size.

Below is the full flight video of the airplane in action.  This is the aircraft bone stock with the 25c 4000 mah pack and the centerburner installed.  For reference, flying the airplane hard, getting about 5 minutes of flight time (timer is set at 5 min).

There we have the E-flite 70mm F-16 Thunderbirds.  This is a great flying EDF that looks good, assembles easily and has some nice features.  Plus, it does have SAFE which is nice if that’s something you’re looking for, but you’ll definitely have much more fun with it off.  If you’re in the market for a first jet, these E-Flite offerings are ideal for that.  Then, you can go bigger and faster from there! 😉  Until next time, I’ll see you at the field! 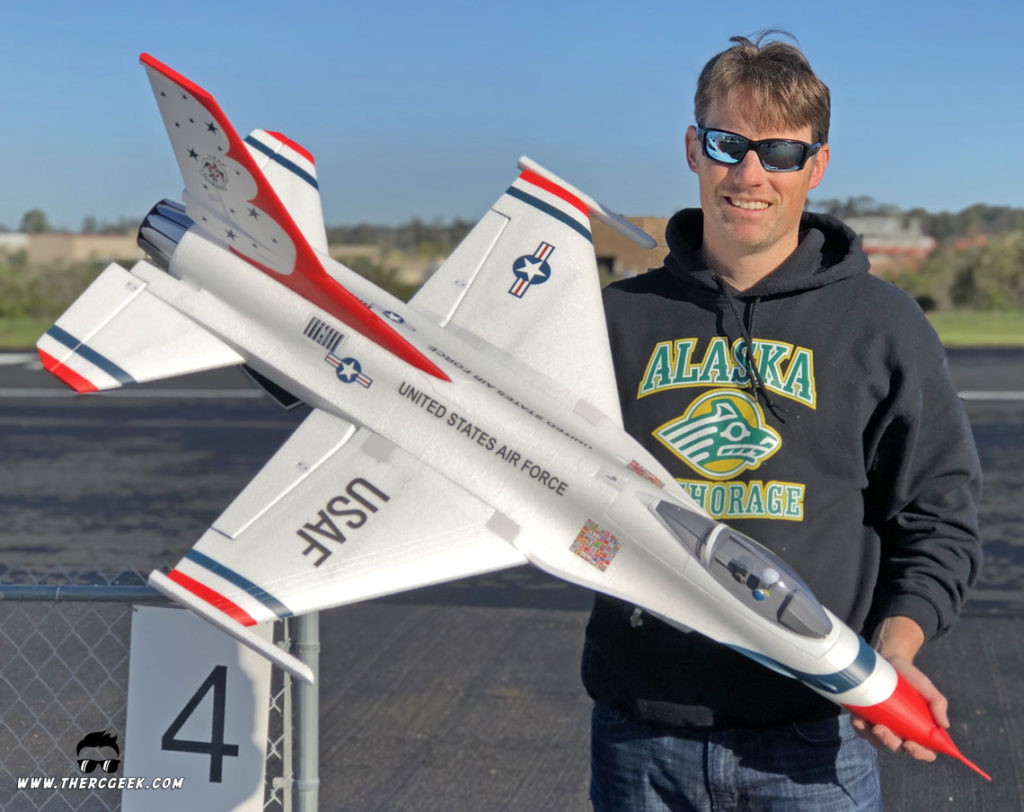